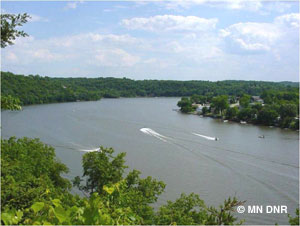 Lake Zumbro is a 600-acre reservoir created by a hydroelectric dam on the Zumbro River. The river's influence creates changing water levels and clarity. A unique fishery exists, which provides an array of riverine and lake species. An established shoreline fishing area is next to the Fisherman's Inn Restaurant. This lake is currently listed as an impaired water for turbidity and nutrients; however, water quality is improving.