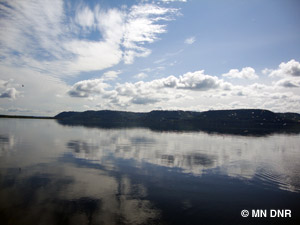 Lake Pepin is the largest lake on the Mississippi River. It is a naturally occurring lake formed by the backup of water behind sedimentary deposits of the Chippewa River's delta. It is part of Pool 4 which extends from Lock and Dam (LD) 3 near Red Wing, MN to LD 4 downstream at Alma, WI. The lake is 21 miles long, averages 1.7 miles wide and covers 29,295 acres. It has a maximum depth of 60 feet and an average depth of 21 feet. Since 1991, 89 species have been identified by the Lake City Long Term Resource Monitoring Program.