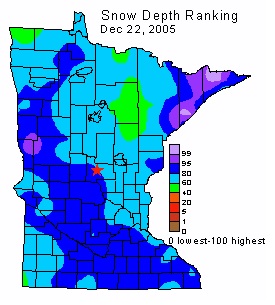 The Minnesota State Climatology Office uses "ranking" maps extensively, when depicting precipitation totals and snow depths. A ranking map (also known as a "percentile" map) compares an observed meteorological condition with conditions reported throughout the long-term climate record. This allows the condition to be described using historical context. A location ranked at zero means that the condition is the lowest found in the historical record; a ranking of 100 indicates the highest on record. A ranking at the 50th percentile (also known as the "median") specifies that the observed condition is in the middle of the historical distribution; with half of all years in the past exceeding the current condition, and half of all years falling below the current condition.