The DNR conducted surveillance around a CWD-positive captive cervid facility near Merrifield starting in the 2017 hunting season. In February 2019, the DNR confirmed chronic wasting disease in a wild deer found in Crow Wing County less than 0.5 miles from the infected captive facility. Based on this discovery, the DNR designated a new CWD management zone, deer permit area 604, in north central Minnesota for the 2019 hunting season.

Minnesota’s CWD management zones were designated due to the detection of CWD in wild deer. The intent of management strategies in CWD management zones is to: increase hunting opportunities with liberalized bag limits to reduce deer densities; limit the potential for disease transmission; and remove any additional positive deer from the landscape. 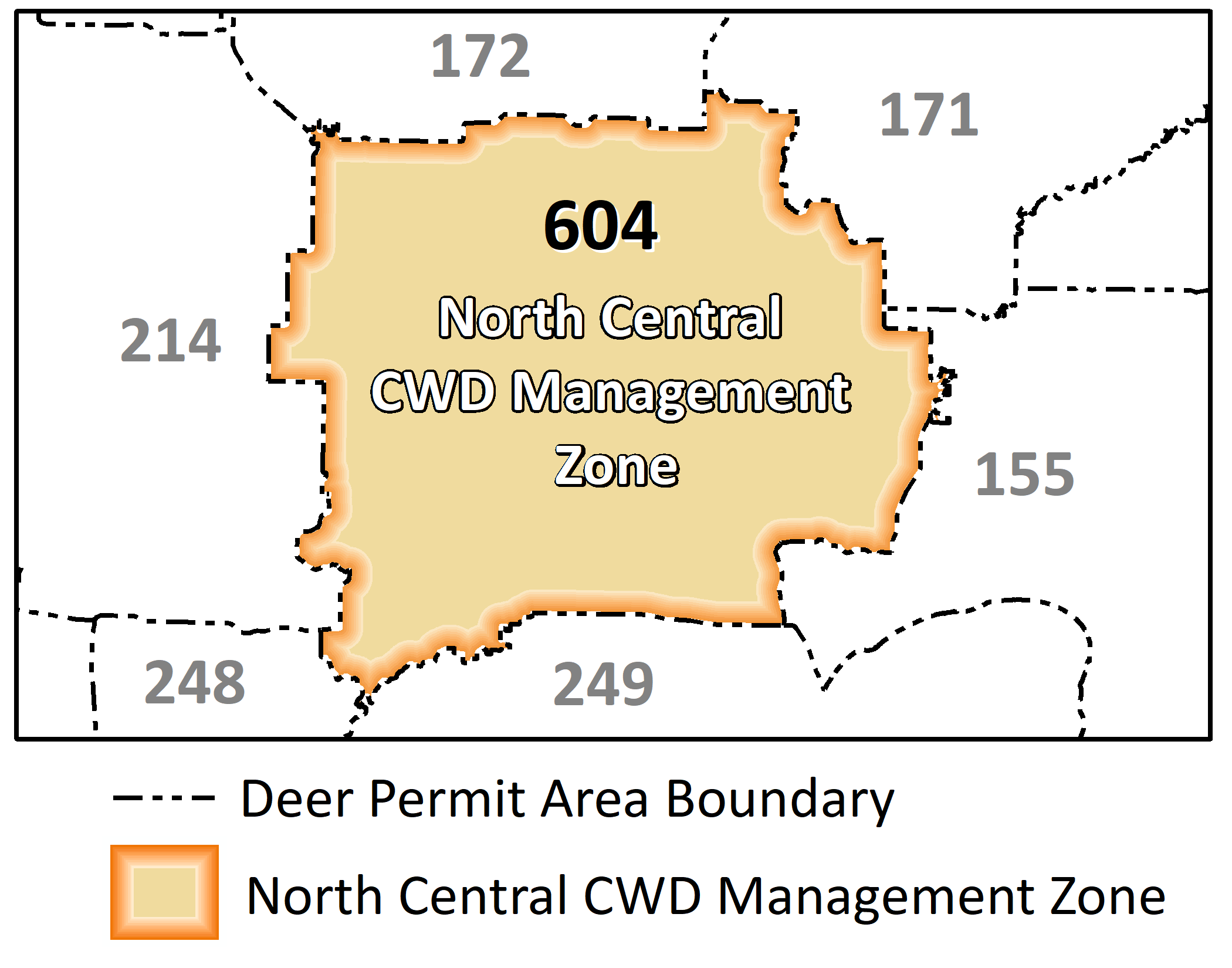 CWD sampling is mandatory for all deer harvested in this CWD management zone. CWD sampling stations are available during all seasons.

The time it takes to receive test results for deer sampled for CWD will vary depending on the number of samples collected. Process your deer as you normally would. Keep processed deer separate and identifiable until test results are received.

Test results for all deer that are sampled will be available online at mndnr.gov/cwdcheck.

What can I harvest?

Is this area affected by carcass movement restrictions?

Yes. Deer carcass movement restrictions apply during all seasons for all deer, including fawns.

What do I do with my carcass after sampling?

After providing a deer sample, deer carcasses must be disposed of properly to meet deer carcass movement restrictions.

To help hunters comply with these legal carcass movement restrictions, the DNR set up dumpsters where hunters can dispose of carcasses (head and spinal column) after quartering or butchering so they can leave the CWD areas immediately.

Alternately, hunters may work with meat processors within the zone; some options are listed below.

Dumpster locations are listed when they are available for the hunting season.

The following is a list of some meat processors in the area. Use at your own discretion and call for availability first.

Using a taxidermist for sampling will result in a longer turnaround time for your CWD test results.

Other taxidermists in this area can be used if the caped out head is brought to a sampling station.

The Veterinary Diagnostic Laboratory (University of Minnesota, St. Paul) received the deer on Feb. 11 for necropsy. After allowing the deer to thaw, Dr. Arno Wuenschmann performed the necropsy on Feb. 14. The deer weighed 100 pounds and was so emaciated that there were no internal fat stores remaining. The deer’s bone marrow was red and gelatinous, a further indication of potentially fatal poor nutritional state. There was also evidence of pneumonia that was caused by the aspiration of food. However this aspiration pneumonia was not deemed of sufficient severity to have caused the animal’s death based on the small portion of lung that was affected. Furthermore, one of the compartments of the stomachs (abomasum) was distended and impacted with food. Additional IHC testing at Michigan State University of the brain stem (the obex) also found CWD on Feb. 27.

Dr. Wuenschmann’s conclusion is that the animal had CWD based on the detection of abnormal prion protein in the obex by immunohistochemistry, which corroborated the previous diagnosis of CWD made at Colorado State University. Both emaciation and aspiration pneumonia are common findings in deer with CWD.

For questions related to the postmortem examination of this case, please contact: Dr. Arno Wuenschmann, DVM, ACVP, University of Minnesota: 612-625-8787 or [email protected].

FAQs about the CWD-positive deer

What was the timeline after the deer was reported?

Why did the DNR test this deer?

Because of the CWD-positive captive cervid facility, there is a high degree of public awareness about potentially sick deer in the area. Given the deer was found dead very close to the positive farm, it was important to test this animal for CWD.

What was the sex and age of the deer?

The deer was an adult female. Since the deer was frozen solid, a section of the lower jaw was cut off to thaw and a front incisor was extracted. This tooth will be sent to Matson’s Laboratory (Manhattan, MT) for aging by cementum annuli technique to provide an age estimate of this deer.

What happened to the carcass?

After sampling, the carcass had been placed in a dumpster at the Brainerd Wildlife Office, to await transfer to a lined landfill, which is an approved method for disposal of deer carcasses.

What did you do when the test results came back?

Once the preliminary test results were received on Feb. 8, the Wildlife Health Program staff contacted Brainerd Wildlife staff to inquire if the carcass was still available. The dumpster had not been picked up and the frozen carcass was still there. The carcass was extracted from the dumpster and routed to the University of Minnesota’s Veterinary Diagnostic Lab for a full necropsy.

What happened to the deer after the necropsy?

The carcass was placed in the alkaline digester at the University of Minnesota.