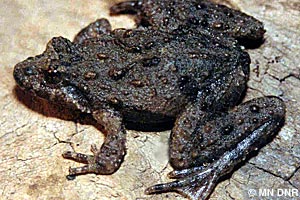 Going, going, gone from the states' frog chorus, the cricket frog (Acris crepitans) is so rarely heard in Minnesota that biologists were considering declaring it extirpated (gone forever) in Minnesota. Much to everyone's surprise, a chorus of cricket frogs was heard calling in Bloomington in July of 1998. Since then, Nongame Wildlife Program personnel have been out each spring looking and listening for this rare species along the Minnesota river Valley where these frogs have persisted despite river limited habitat and flooding.

This Bloomington population is located far from the species historically known home range in southeast Minnesota. Therefore, DNR biologists had questions about the origin of the cricket frogs at this unexpected location.

In 2003, with funding from the Nongame Wildlife Program, Dr. Andrew Simons in the Dept. of Fisheries, Wildlife and Conservation Biology at the U of MN, took on the challenge of determining the origin of the Bloomington cricket frogs. Five of these tiny and allusive frogs were captured. Without causing any mortality, a toe was clipped from each frog for a tissue sample.

The results from the Minnesota frogs were compared to DNA analysis of 40 other cricket frogs collected from across the nation. The researchers concluded that "That the Bloomington population has DNA sequences that are unique compared to other northern cricket frog populations." They recommended that these frogs be managed as a native endangered species.

In July 2004, a second population was discovered near Winona by a volunteer with the DNR's Frog and Toad Calling Survey project.