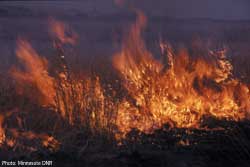 The fire environment is defined as the "surrounding conditions, influences, and modifying forces that determine wildfire behavior." In Minnesota, the main components of fire are weather, available fuels, and human behavior. These components affect the likelihood of a fire start, speed and direction at which a fire will travel, intensity at which a wildfire burns, and the ability to control and extinguish a wildfire. Although weather cannot be changed, the fuels (vegetation) and human behavior can be modified. Consequently, many of our opportunities in reducing the wildfire threat lie in proper management and manipulation of wildland vegetation and in changing our behavior.

Fuel is required for any fire to burn. With regards to wildfire, fuels almost always consist of vegetation, both living and dead (trees, shrubs, dried grasses, fallen branches, etc.) Houses, when involved in a wildfire, become a source of fuel. The amount, size, moisture content, arrangement, and other fuel characteristics influence ease of ignition, rate of fire spread, length of flames produced, and other fire behaviors.

When people are living in a fire environment, the human-built environment becomes an important factor in predicting the loss of life and property. Untreated wood shake and shingle roofs, narrow roads, limited access, lack of firewise landscaping, inadequate water supplies, and poorly planned subdivisions are examples of increased risk to people living with the threat of wildfire.