The trout streams of southeastern Minnesota are different that those found along the North Shore of Lake Superior. That's largely a result of things that happened thousands of years ago to shape the area's geology. While most of Minnesota was once covered with glaciers that left behind deposits of rocks and sand and soil known as drift, southeast Minnesota was untouched by those processes. Sometimes referred to as the Driftless Area, this part of the state has numerous streams fed by cold, clean groundwater cutting its way through limestone bedrock. The groundwater that feeds these streams helps maintain stable habitat conditions favored by trout and the insects they feed on: 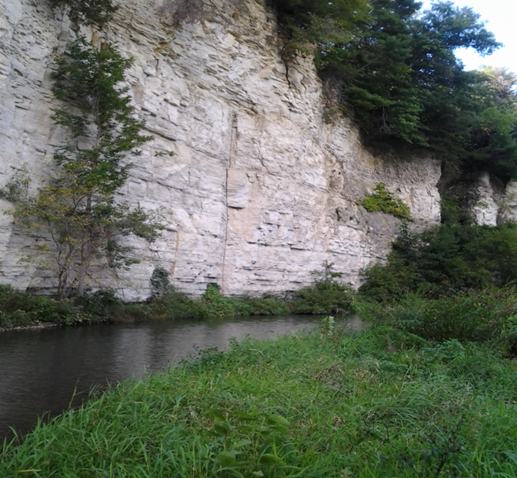 Because of this combination of conditions, southeast streams are able to support a greater abundance of trout than streams in other parts of the state, and the fish grow more quickly, too.

A product of their environment

Children, it's often said, are a product of their environment. The same is true of trout streams. The environment of a trout stream, though, isn't just the water and the shoreline. It's the sum of all that happens on all the land within the stream's watershed. Sometimes land use practices can present major challenges for the health of streams. In areas where there's significant development, for instance, storm water running off lots of pavement and roofs can carry pollutants and warm the stream beyond what's healthy for trout. In areas where agriculture is the dominant land use, other problems can arise:

The Minnesota Department of Natural Resources is working diligently in cooperation with a variety of partners including landowners, nonprofit organizations and other government agencies to conserve and enhance southeast Minnesota's unique coldwater resources.

You can find all three of Minnesota's trout species in southeast streams: brook trout, the only native species; brown trout, most abundant, with reports of 30-inch monsters caught each year; and rainbow trout, stocked in catchable sizes where angling pressure is high.

Boasting more than 700 miles of designated trout streams, southeastern Minnesota is an angler's paradise for anyone willing to park the boat and do some walking and wading. With 221 miles of angler easements – land along streams that's privately owned but open for fishing – access to trout streams is readily available. State forests and state parks such as Whitewater, Forestville Mystery Cave and Beaver Creek Valley also provide quality coldwater angling opportunities. The DNR publishes a booklet of maps highlighting where to access streams in the southeast. The maps also are available online.

The DNR has in recent years greatly expanded the seasons for trout fishing in southeast Minnesota. All trout streams in Houston, Fillmore, Dodge, Mower, Olmsted, Winona, Goodue and Wabasha counties are open for catch-and-release fishing from January 1 until the harvest season opener on the Saturday closest to April 15. Once the harvest season ends September 14, catch-and-release fishing is resumes until October 15. For select streams located in state parks (Beaver Creek Valley, Whitewater, and Forestville), as well as within the city limits of Chatfield, Lanesboro, Preston and Spring Valley, catch and release fishing is allowed from October 16 until December 31. Any day of the year there is a place to trout fish in Southeast Minnesota.