Minnesota Department of Resources Conservation Officer Mitch Boyum has been named the 2019 DNR Conservation Officer of the Year, an award presented to an officer each year for outstanding overall career performance. Enforcement Division Director Rodmen Smith presented the award earlier this month at the division’s annual awards ceremony and training conference at Camp Ripley. 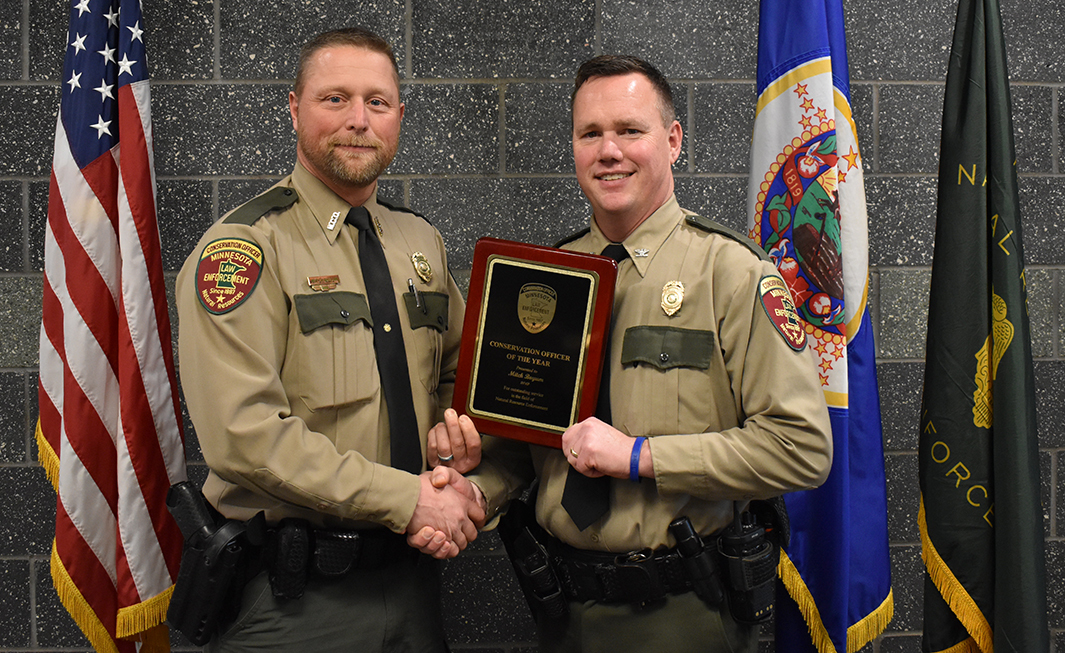 Boyum, a conservation officer since 2000, patrols the Rushford area in southeastern Minnesota. He has worked extensively on enforcement issues related to chronic wasting disease, assists in teaching new conservation officer candidates at Academies, and is dedicated to helping youth learn about and enjoy the outdoors.

"Throughout his career, CO Boyum has proved himself to be an exceptional officer," Smith said. "He understands the unique position conservation officers hold in their communities and is a positive reflection not just of the Enforcement Division, but the department as a whole."

Other Enforcement Division honorees include:

Boat and Water Safety Achievement Award – Nick Klehr
CO Nick Klehr, who patrols the lake- and river-rich Litchfield station, has prioritized boat and water safety education and enforcement since he became a conservation officer in 2014.

"CO Huener’s passion for waterfowl – and his understanding of the importance of protecting the wetland habitats upon which they rely – are evident in his waterfowl-related work," Smith said.

Willard Munger Wetlands Achievement Award – Shane Vernier
CO Shane Vernier, who patrols the Willmar area, is the recipient of this year’s Willard Munger Wetlands Achievement Award. The award, which recognizes an officer who’s particularly devoted to water resource protection, is named after the longtime state House of Representatives member who was focused on conservation and the environment.

"The water in CO Vernier’s patrol area receives heavy use, including from agricultural operations and people out recreating, but he does an outstanding job of making sure those valuable water resources are protected and preserved," Smith said.

Enforcement Education Achievement Award – Jen Mueller
CO Jen Mueller, a regional training officer who works with volunteers to deliver the Enforcement Division’s safety programs, is recognized for her commitment to education. Throughout her law enforcement career, she’s prioritized education as one of the most important aspects of her job.

"Officer Mueller provides education and training to other law enforcement personnel and members of the public alike," Smith said. "There’s no doubt Minnesota is a safer place because of her dedication."