The Minnesota Department of Natural Resources has confirmed the capture of a silver carp on the St. Croix River. The invasive carp was caught by a commercial fisher near Prescott, Wisconsin, during routine spring netting. 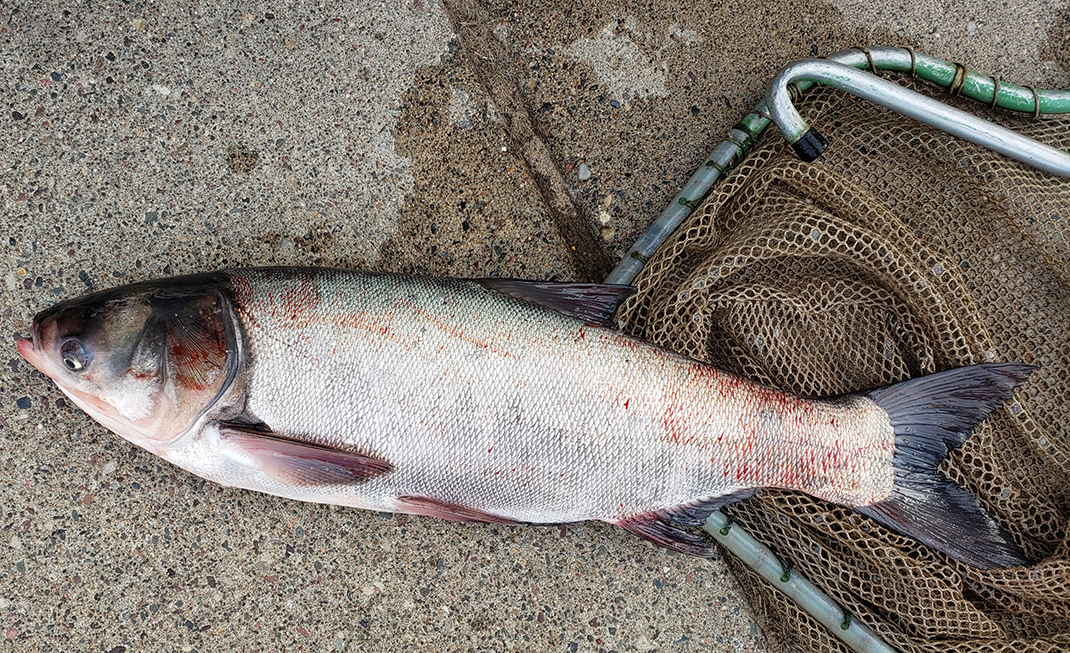 "Captures of individual invasive carp are disappointing but not surprising," said DNR invasive fish coordinator Nick Frohnauer. "This silver carp was captured in an area that is heavily fished in the spring, as it is an overwintering area for several species of fish. In 2017, two silver carp were captured at this same location."

The most recently captured silver carp was a 26 1/4 inch male weighing seven pounds.

The commercial fisher had informed the DNR area fisheries office that his crew would be netting in the area. Upon discovering the silver carp in the catch, the commercial fisher immediately contacted the DNR.  A DNR invasive carp specialist secured the fish and transported it back to the area office for further processing. DNR staff are working with the commercial fisher to conduct additional netting at the location of this discovery.

"In this instance, there was one invasive carp out of the hundreds of fish handled in the haul," Frohnauer said.

Invasive carp progressed upstream since escaping into the Lower Mississippi River in the 1970s. These large fish compete with native species and pose a threat to rivers and lakes. No breeding populations have been detected in Minnesota waters.

Individual invasive carp have been caught as far upstream in Mississippi River Pool 2 near the Twin Cities (bighead, grass, and silver), the King Power Plant on the St. Croix River by Oak Park Heights (bighead), and just downstream of Granite Falls in the Minnesota River (bighead).

The DNR Invasive Species Program has built partnerships with state and federal agencies, conservation groups, university researchers and commercial businesses to prevent the spread of invasive carp. The 2015 closure of the Mississippi River lock at Upper St. Anthony Falls in Minneapolis was a major accomplishment of these efforts.

The DNR is actively engaged with several prevention efforts.

Invasive carp captures must be reported to the DNR immediately. Call 651-587-2781 or email [email protected]. People who think they may have captured an invasive carp should take a photo and transport the carp to the nearest DNR fisheries office or make arrangements for it to be picked up by a DNR official.

For more information about invasive carp go to mndnr.gov/invasive-carp.