It was two decades ago – maybe more – when Mike Shelden knocked on the door of a fish house, identified himself as a conservation officer, and let himself in. The angler inside sat with his back to the door, tending more lines than the two that were allowed. The man didn’t even bother turning around. 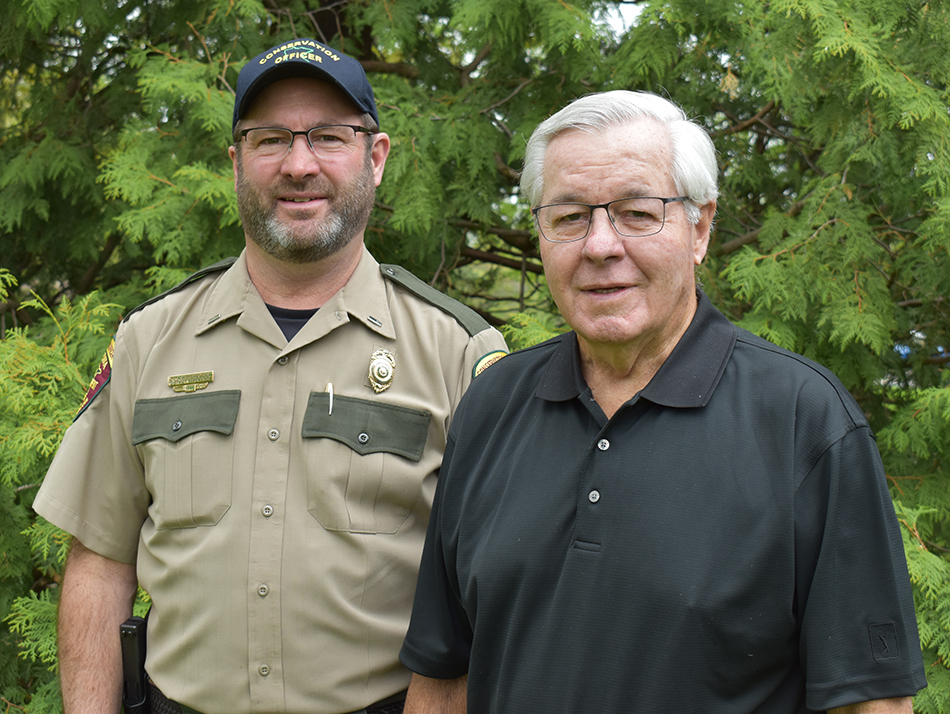 "So, are you the big one or the little one?" he asked, not as a swipe at Shelden’s size but as a legitimate question.

After all, a Shelden has patrolled the Alexandria area for the past 51 years – first Duane and then, beginning in 1996, his son Mike. Until now. The May 28 retirement of Lt. Mike Shelden, who wrapped up his career in the Alexandria station as the District 3 supervisor, means for the first time since 1968, there won’t be a Shelden protecting the area’s people and natural resources. It’s a bittersweet moment for father and son. Sure, there were too many middle-of-the-night wake-up calls to count and anniversary dinners interrupted by well-meaning folks who just wanted to chat about deer hunting. But being a conservation officer was a cherished way of life – pretty much all Duane and Mike and their wives and children have ever known.

While each Shelden got his start in another part of the state – Duane in the metro area, Mike in Appleton – they’ve become synonymous with the Alexandria area, recognized for their work in the community, their commitment to education and their fair approach to natural resources law enforcement. Both are recipients of a number of awards for their professional efforts, and are the lone father-son combination to have been named the Enforcement Division’s Conservation Officer of the Year (Duane in 1995, Mike in 2006).

"Duane and Mike exemplify what public service is all about," said Col. Rodmen Smith, DNR Enforcement Division director. "Their commitment to Minnesota’s people and natural resources is a legacy that will live on."

Lt. Jeff Johanson, the training coordinator/supervisor for the Enforcement Division who worked alongside Mike Shelden in the neighboring Osakis station for years, says he’s a devoted family man who cares deeply about other people.

"And professionally, Mike is a role model for what a successful conservation officer should be," Johanson said. "He has a relentless work ethic, knowledge, appreciation and passion for our mission and the state’s natural resources, and the ability to build positive relationships with others."

Shelden grew up in Alexandria, rode around with his dad as a youngster, and knew before he was a teenager he wanted to follow in his footsteps. During his first 10 years on the job, Mike was stationed in Appleton and Morris. The two worked together routinely, especially during the summer fishing season and the winter ice-fishing and snowmobile season. When Duane retired and Mike had the opportunity to transfer to the Alexandria station, he jumped at it.

"There were a few times people would say, ‘Well, your dad would have let me go on this one.’ And I’d say, ‘I bet that’s not the case,’" Shelden said. "It was an easy transition moving back to Alexandria, and part of that was because Dad was a very diligent worker. People were used to being checked and held to a standard where they were expected to do the right thing. He paved a pretty easy path that way. Then before long you’re writing a ticket to a guy one day and seeing him in church the next. Those things happen – you just have to do your job, be consistent, and treat people with respect."

As successful as Mike was at ensuring people followed the law, he also focused heavily on education. He believed interacting with people outside of enforcement checks would help him build relationships that would deter violations and make people more likely to call him when they saw something that might be amiss. Given the heavy development of lakeshore in the Alexandria area, Shelden was a trailblazer among conservation officers when it came to enforcing rules meant to protect shorelines and aquatic habitat. He went so far as to assist in the development of a course for real estate agents that explained aquatic plant management laws and the importance of aquatic vegetation.

He participated in the safety courses – ATV, firearms and snowmobile – that are a big part of conservation officers’ work, and regularly spoke to school children about conservation and the environment. He also developed "Buck Fever" and "Fishing Fever" presentations that he’d give to employees of local businesses. He’d talk to hundreds of people at a time about safety-related topics and regulations, then hang around afterward to answer people’s questions individually. The programs became so popular he had to bring in other officers to help out.

Of course, part of the job is to catch people breaking the law. One of the biggest and most complex cases he worked involved an aquaculture operation. In essence, people were catching largemouth bass and then using them for commercial purposes. In the end, the defendants pleaded guilty to 16 charges, lost equipment, and were fined about $10,000. The Douglas County attorney at the time, Chris Karpan, was quoted in news stories as saying much of the reason the case was resolved quickly "and with the almost unprecedented cooperation of the defendants was Shelden’s belief in treating people fairly and decently."

Shelden readily admits he goes into retirement with a mix of emotions. He’ll remain in Alexandria – his mom and dad still live there, too – and he’ll still be active in teaching people about the outdoors and natural resources. But he won’t wear the badge anymore and he’ll have to get used to a phone that’s far more silent than it’s been for the past 33 years.

"I feel like I’m getting an award for 10 years of service; truthfully, the years have flown by," Shelden said. "It’s been a dream come true to have the opportunity to do this job. There wasn’t a day I woke up and wanted to do anything else."

Note: An open house to celebrate Shelden’s career and retirement is set for Saturday, June 15, at the Legacy of the Lakes Museum in Alexandria. It runs from 3 to 6 p.m., with a program beginning at 4:30. Everyone is welcome to attend.