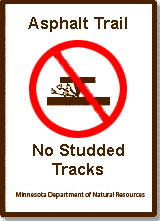 I have studs on my snowmobile and still want to enjoy Minnesota's snowmobile trails. How does the metal traction device (stud) law affect me?

A person operating a snowmobile with metal traction devices on any paved trail that is designated closed to stud use is guilty of a petty misdemeanor punishable by a fine of no more than $50 for the first offense, no more than $200 for the second offense, and no more than $500 for the third and subsequent offenses.

Non-metal plastic or nylon studs are not restricted.

Is there a penalty for not complying with Minnesota's metal traction device law?

Yes. Total fees assessed upon conviction for this offense may vary depending on where the offense occurred.

May I cut the studs off, without totally removing them from the track and still be in compliance?

Yes, as long as they are shorter than the track.

May I screw out the studs and put in plastic inserts to protect the threading?