Outbreaks can begin suddenly or develop slowly over a period of several years. Populations in northern Minnesota peak every 10 to 16 years. As suggested by the chart below, forest tent caterpillar (FTC) populations could be building towards a 2014 or 2015 peak level of defoliation. 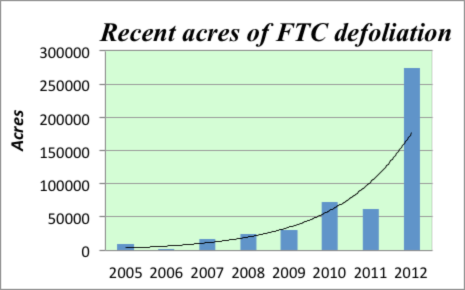 During outbreak peaks, forest tent caterpillars can number from 1 to 4 million per acre. They create a nuisance to people living or vacationing in forested areas from late May to mid-June.

In the west-central counties, FTC populations may synchronize with northern outbreaks or they may have small, localized outbreaks that pop up and collapse quickly. These outbreaks occur in oak, basswood, and aspen along lakeshores and woodlands and cover a relatively low number of acres.

Populations collapse due to starvation, predation, and parasitism. Populations of the "friendly fly," a native parasite, build up as caterpillar populations peak and can themselves become a nuisance.