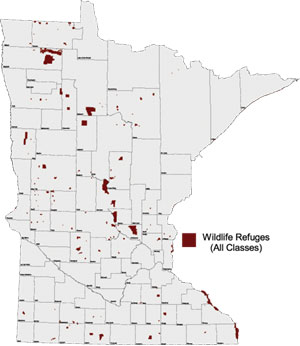 A 1985 inventory of all refuge types in Minnesota documented 116 waterfowl refuges totaling slightly over one million acres or 2% of the state. Because type and ownership take on many forms, management intensity can vary considerably. Areas owned by the federal or state government or private entities are often actively managed with water level manipulation and farm programs. Others, such as statutory, open-water, or feeding and resting areas, are often passively managed. As of 2003, the Division of Wildlife is again inventorying waterfowl refuges in Minnesota. The inventory will provide an up-to-date picture of the spatial distribution and habitat quality of existing refuges and point to areas with inadequate refuge coverage.

During the mid-1970s, the DNR developed a small system of waterfowl refuges in north-central Minnesota to augment existing refuges for ring-necked ducks. At that time, pressure on the waterfowl population was increasing. Growing use of ATVs, four wheel drive vehicles, and in some cases float planes created easier access to remote bog lakes that were providing security for waterfowl. Increased hunting pressure drove many birds out of the area. So, with the cooperation of local hunters and Leech Lake reservation officials, four refuges were established in high harvest areas. The new refuges complemented nine existing security areas and strengthened traditional migratory use by ring-necks and other waterfowl. Ring-necked ducks now remain in large numbers throughout most of October in north-central Minnesota; mid-October surveys frequently tally around 500,000 ducks.

There are two classes of refuges with the goal of either restricting hunting or restricting access (trespass).

State Game Refuge M.S. 97A.085
State game refuges prohibit the hunting or trapping of some or all wild animals within the refuge. An example of a partial restriction would be a state goose refuge: all types of hunting are allowed except goose hunting. These refuges may be open or closed at the discretion of the DNR commissioner.

State game refuges may be designated by the DNR commissioner if one of the following three conditions is met:

Before designating a state game refuge, the DNR commissioner must hold a public hearing within the county in which the majority of the proposed refuge is located.

Migratory Waterfowl Refuge M.S. 97A.095 Subd. 1
No trespass is allowed during the waterfowl hunting season. A migratory waterfowl refuge must be part of a state game refuge. It may be designated by the DNR commissioner after receiving a petition from 10 resident, licensed hunters and consideration by the DNR.

State Duck Refuge M.S. 97A.083, 97A.137
No trespass is allowed from September 1 through the end of the waterfowl hunting season. A state duck refuge must be within a state wildlife management area. It may be designated by the Division of Wildlife.

State Wildlife Sanctuary M.S. 97A.083, 97A.137
No trespass is allowed at any time. A state wildlife sanctuary must be within a state wildlife management area. It may be designated by the Division of Wildlife.

For regulations on specific state and federal refuges please refer to the current hunting regulations.