A plan for wolves

The DNR is updating the state’s wolf management plan.

Although Minnesota has an existing wolf plan, periodic assessments are needed to evaluate the plan’s efficacy and make improvements where needed.

The DNR’s wolf plan is 20 years old. It was developed through extensive public input, supported by the federal government and was intended to provide guidance for Minnesota to transition from federal to state wolf management authority.

The wolf status has fluctuated, and with it so has the proportional amounts of state and federal management authority and activities.

Nevertheless, there may be new information and strategies for improving wolf management.

Although much of the plan is still relevant, the wolf planning process is intended to identify how the plan can be improved and potentially set goals and objectives for improving wolf management strategies.

Path to an update 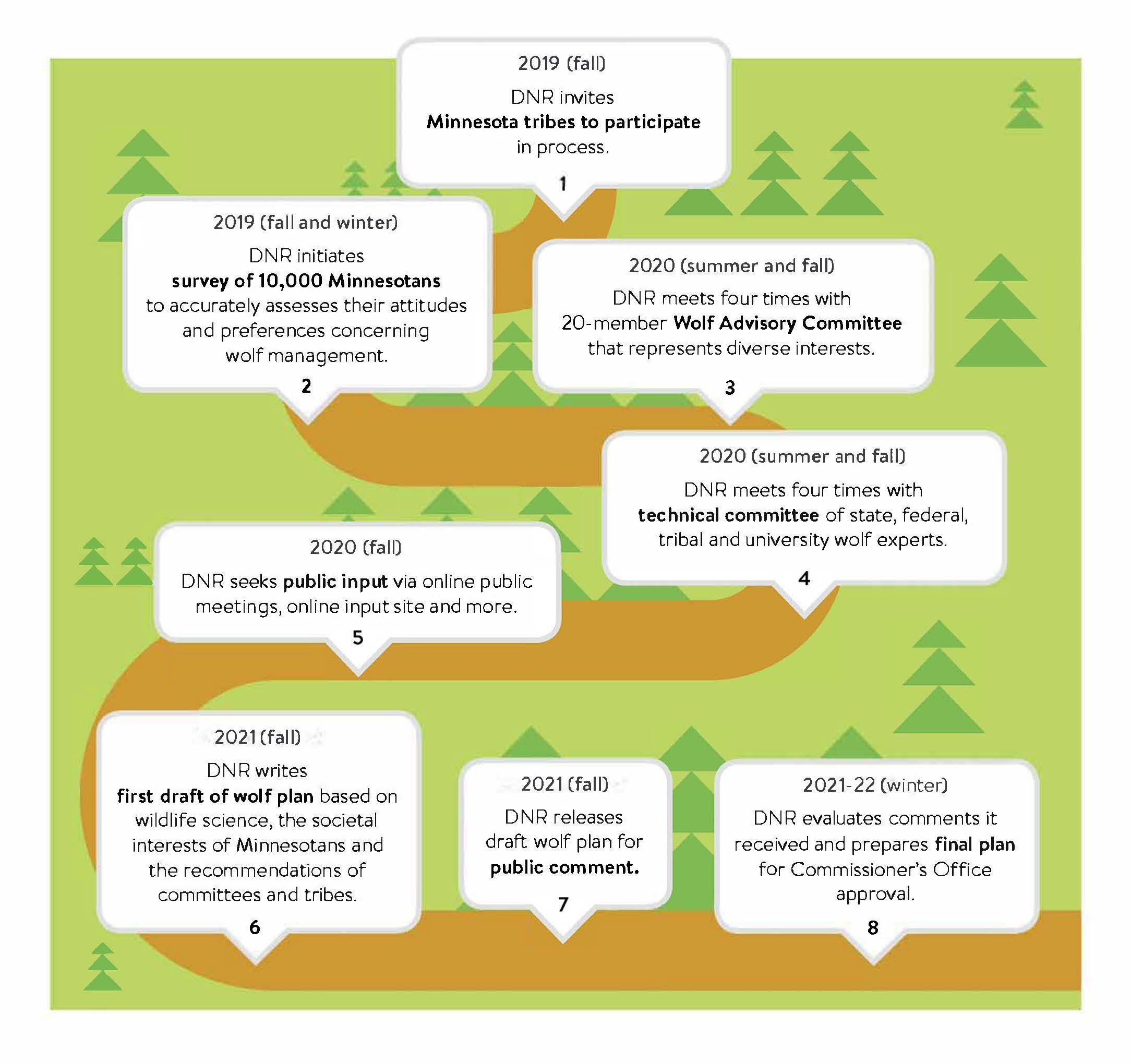 The time has come to make technical revisions, identify strategies and objectives to improve wolf conservation, and evaluate public attitudes that may influence how wolves are managed.

The wolf population made a remarkable recovery under the Endangered Species Act, and has been considered one of the most successful species recoveries since the law was passed.

In 2021, wolves were removed from the Endangered Species Act, and wolf management reverted to state and tribal authority. However, there still needs to be direction from the plan on how we best manage the Minnesota wolf population regardless of the legal status.

What does the wolf plan do?

The wolf plan describes and provides guidance on how the state manages wolves. This includes wolf population monitoring, population management, depredation control, public safety and more. Updates to the plan are expected to be completed in March of 2022 following a public review process.

How is the DNR collecting input?

The DNR is collecting input in five ways:

The Department of Natural Resources wants you to contribute to the new Minnesota wolf plan. To receive updates on progress and how to provide input subscribe to our wolf newsletter.

What do Minnesotans value?

To ensure that wolf plan authors understand Minnesotans’ current values, beliefs and attitudes toward wolves, the DNR contracted with the U.S. Geological Survey through the Minnesota Cooperative Fish and Wildlife Research Unit at the University of Minnesota to survey nearly 10,000 Minnesota residents.

The survey focused on Minnesota households, resident adult firearms deer hunters and livestock producers. The report is available on the DNR website.

Yes. The DNR is committed to working with tribal governments. While Native American people and tribes have individual perspectives, history indicates that tribes in Minnesota generally did not consider wolves to be a threat or game, but held the wolf in high regard for spiritual and traditional purposes. Native Americans still hold wolves in high regard today.

Will wolf experts weigh in, too?
Yes. A technical work group will review wolf plan components, provide assessment and evaluation of the plan and make recommendations on population monitoring, research and management, and evaluate recommendations for sustaining wolf populations in Minnesota. This expert group is comprised of agency and organizations involved in wolf management and research in Minnesota.
Who is on the Advisory Committee?
The committee consists of 20 stakeholders from throughout the state. The DNR selected committee members as part of an intentional effort to include diverse perspectives, including hunting and trapping; wolf advocacy and animal rights; livestock and agriculture; forestry, conservation and environmental protection; and local government. The committee has been charged with providing perspectives, reacting to suggested changes, broadening our understanding about how Minnesotans experience wolves, and identifying what areas of wolf management they would like to see changes being made, particularly around areas where there may be controversy.