From the air Leech Lake resembles a Rorschach inkblot. From a boat, the irregular shape of this 112,000-acre northern Minnesota lake often hides more than a century of development along its shores. In places, the lake's untamed character is more than an illusion, according to Harlan Fierstine, a retired fisheries biologist who spent 23 years as the Leech Lake area supervisor with the Department of Natural Resources. During a recent outing, he and his granddaughters watched a gray wolf pursue a deer across a cabinless point of land. But on this calm, sunny mid-July morning, Fierstine and I are searching for muskie—an equally formidable predator that swims at the top of the food chain.

For the state's muskie propagation program, the DNR takes close to 1 million eggs and milt from muskies in Leech Lake's Miller Bay every four years. Most go to the hatchery in Park Rapids. Some go to hatcheries in St. Paul and Waterville. Ten to 50 percent of the eggs successfully hatch. When the Park Rapids fry reach fingerling stage, the DNR stocks 10 percent of them back into Miller Bay. The rest go to several broodstock lakes, where fingerlings mature and become the annual source of eggs for propagating muskie.

Though unsuitable for natural reproduction, Lake Rebecca near Rockford has served as the main broodstock lake since 1987. Every spring the DNR takes an average of 930,000 eggs from Leech Lake fish that have reached sexual maturity in Lake Rebecca. Those eggs go to hatcheries in St. Paul, Waterville, and Park Rapids. After the eggs hatch, muskie fry are moved to rearing ponds located around the state where they grow into fingerlings (10 to 12 inches long). Each year the DNR releases around 25,000 fingerlings in roughly half of the state's 100 managed muskie lakes. Most of the stocked lakes receive muskie fingerlings every other year.

Because DNR fisheries staff can catch so many spawning muskies in Miller Bay, they can afford to take fewer eggs from each fish. This increases the genetic diversity of the muskies being reared for broodstock. 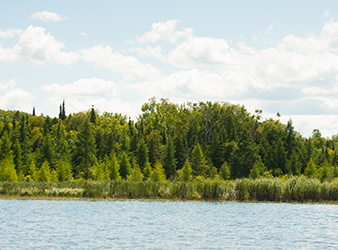 In a public-private partnership, the DNR acquired three acres of land with 600 feet of shoreline on Leech Lake's Miller Bay to protect critical fish and wildlife habitat. The Leech Lake Area Watershed Foundation contributed a $25,000 donation from the Hibbeln family and a $10,000 grant from the Hugh C. Becker Foundation, administered by the Twin Cities Chapter of Muskies, Inc. These funds helped offset the price tag of $263,500. The donations, when given to the DNR, triggered a match of $35,000 from the Reinvest in Minnesota critical habitat match program. Most of the funding for this project was provided by the Clean Water, Land and Legacy amendment's Outdoor Heritage Fund.

Our first stop is Pelican Island, a short boat ride from the public access at Stony Point. Fierstine hands me a 7-inch-long inline spinner with a silver blade trailed by a treble hook, which is adorned with brown deer hair and a bit of pearlescent tinsel. "I caught a 50-inch fish on it last week," Fierstine tells me. His statement is not boastful; rather, it's a way for my soft-spoken fishing guide to say, "I know this lure works."

So I clip the spinner, called a bucktail, to a heavy steel leader, then haul the stout baitcasting rod over my head and heave the bait shoreward. The bucktail arcs through the air, jangling like cheap silverware, and lands with a satisfying splash. I lower the rod tip and crank the lure back to the boat. Before lifting it out of the water, I move the lure in several large figure 8 patterns—a technique that sometimes triggers a following muskie to strike. Fierstine and I will repeat these motions hundreds of times today, with the knowledge that boating a single fish will exceed our expectations.

The pursuit of muskie is famous for its long odds. For the persistent, the payoff is the thrill of experiencing the raw power and savage ferocity of this legendary gamefish. But staying focused during the fishless hours, days, or even seasons is one of muskie angling's biggest challenges.

"It could happen on the next cast," says Fierstine. "You just don't know which next one."

Fierstine and the rest of Minnesota's muskie anglers have reason to remain optimistic despite the fickle nature of their quarry. Muskie fishing is the best it's ever been across the state, and Leech Lake's fish play a central role by contributing superior muskie genetics.

The DNR began using the progeny of Leech Lake's muskies for its stocking program in the early 1980s, after research confirmed that the lake's fish grow faster and larger than muskies from other watersheds. In the decades that followed, restrictive harvest regulations and a strong catch-and-release ethic among muskie devotees allowed the potential of these genetically distinct fish to be realized. In their native waters and the 46 lakes and two rivers where they are stocked, muskies bearing the DNA of Leech Lake fish often attain lengths of 50 inches or more. But for all the awe-inspiring brawn of a trophy muskie, those prowling Leech Lake's waters rely on a specific and relatively fragile habitat to reproduce. Managing muskie here means protecting that habitat.

In 1979 pioneering DNR muskie researcher Robert Strand decided to fish for the secret. Strand and a group of volunteer anglers caught 15 muskies on Leech Lake over the course of a season. Each fish was surgically implanted with a transmitter, and 14 fish survived until the next spring. Using boats and airplanes, researchers then followed those muskies to their spawning areas.

They discovered that the muskies disperse their eggs offshore in 3 to 6 feet of water over chara, an algae known as sandgrass to some anglers. With this knowledge, DNR fisheries staff could finally obtain enough eggs and milt from Leech Lake muskie to use in the state's propagation program. (Since the 1950s, the program had relied on much smaller, slower-growing muskies taken from Shoepack Lake on the Kabetogama Peninsula.)

Even the best of the six muskie-spawning locations uncovered by Strand's research presented logistical challenges, according to Doug Schultz, the DNR's current Walker area fisheries supervisor. "It was a miserable job," he says about gathering eggs and milt in spawning areas in Sucker and Steamboat bays. Being far offshore, the operation required handling large nets in open water at the mercy of the wind. "And because our nets weren't oriented to shore, our catch rates weren't all that good," Schultz says. "A lot of fish were just swimming around the nets."

Thanks to tips from anglers, biologists discovered a far more favorable location for trapping spawning muskies in 2005. Pat Rivers, then DNR large lake specialist at Leech Lake, recalls setting test nets in Miller Bay. "We caught oodles of fish," he says. "There were obviously fish in there seeking to spawn. That following year, we decided we were going to go all in on Miller Bay. Our catch rates were 10 times what they were in Sucker and Steamboat."

Following that success, the largely undeveloped 200-acre Miller Bay with its thriving beds of chara took on a new significance. "This isn't just a small bay on a big lake," says Rivers, whose current role at the DNR includes protecting sensitive shoreline through land acquisitions. "It's a small bay that affects muskie management across the state."

While the discovery of Miller Bay solved one challenge for the state's muskie propagation program, protecting it presents a new predicament that is familiar on many other Minnesota lakes. "The really good lands that are in private property have already been developed, so developers are going to turn to what's next," says Rivers. "Development of sensitive bays is always going to be a challenge for us because that's where development pressure is turning."

Turbulence from boat motors easily uproots the slow-growing chara. "If you've got a connection from a shallow protected bay to the main lake, people are going to get to the main lake one way or another. And they're not going to let a small plant get in their way," says Rivers. "There are places on Leech Lake where development makes a lot of sense. And there are other places where the concern for the habitat and the sensitive nature of that habitat warrant protection."

The key to ensuring the health of habitat in Miller Bay is to limit development. Since learning of the importance of Miller Bay, the Leech Lake Area Watershed Foundation has been working with the DNR to conserve as much of the bay's 2 ½ miles of shoreline as possible. "We set about contacting landowners in the bay and explaining the importance of the bay to them," says Paula West, the foundation's executive director. "We let them know that we were there to help them with any conservation objectives they might have."

In the fall of 2013, a family agreed to sell the DNR a three-acre parcel with 600 feet of Miller Bay shoreline. The DNR designated this public land as an aquatic management area. Prior to this recent land purchase, the Leech Lake Area Watershed Foundation helped the U.S. Forest Service acquire 6,600 feet of shoreline on Miller Bay. West is working with other landowners who may have an interest in selling property or signing up for conservation easements along the bay.

As the length of Minnesota's muskies has grown, so has the number of anglers pursuing them. A study published in 2003 estimated that between 30,000 and 80,000 anglers ply Minnesota waters for muskie. The latest tally in 2007 found 108,000 resident anglers reported fishing either casually or avidly for muskie.

My aching wrist and shoulder remind me that I fall into the category of casual muskie angler as I watch Fierstine methodically cast, retrieve, and smoothly circle his flashy double-bladed bucktail at the boat. The cool air that lingered near the lake's surface when we set out has been chased away by the glare of the afternoon sun. For our efforts, we've seen two small fish, both in the neighborhood of 30 inches long.

Fierstine fires up his outboard motor, and we skim east to Bear Island. There a loon, bobbing on the boat's wake, assesses us with a sidelong stare before resuming its own search for fish. The drone of distant outboard motors is barely audible over the indignant squeal of ring-billed gulls and the chatter of common terns. It's a Tuesday, and we have the lake mostly to ourselves.

Fierstine taps his foot on a control pedal, and the trolling motor quietly whirs back to life. We begin snapping casts toward submerged boulders that extend in a line off the island's southern tip. Before long, I get my first glimpse of what I came to see. A long olive-hued shadow has materialized behind Fierstine's bucktail. The following fish stops 5 feet short of the boat. Fierstine circles his lure, trying to entice the thick-bodied, 50-plus-inch muskie to attack. His efforts appear to be met with a weary glance as the torpedo-shaped predator moves unhurriedly back into its shadowy lair among the boulders.

"I guess he just came out to get us excited," Fierstine says sanguinely. "That's part of what keeps you coming back."

Common wisdom on the lake holds that calm, sunny days make for tight-lipped muskie, according to Fierstine. "But there is always an exception," he adds.

Our lures get the attention of two more muskies during our nine hours of diligent casting, but Leech Lake offers us no exceptions. We count the fish we saw as a minor coup, but here even a follow from a muskie holds a deeper meaning. Like watching a wolf trotting along an undeveloped shoreline, it's an affirmation that the water these native muskies inhabit is still wild enough.