Drum roll, please. A round of applause. This issue of Minnesota Conservation Volunteer celebrates a new milestone, 75 years of telling the story of Minnesota's bounty of natural resources. The first issue, 5,000 copies, went to schools, libraries, and conservation groups; today the Volunteer's circulation tops 120,000, including nearly 3,000 schools and public libraries. 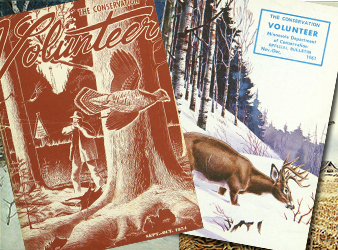 The Era of Wildlife Art

From the 1950s to the 1980s, the cover of Minnesota Conservation Volunteer magazine was often a scene rendered by one of the state's many talented wildlife artists. Take a look back at a selection of covers and read what the magazine had to say about the art and the artists.

Every other month for 75 years, never missed a beat, 458 issues to date. Three-quarters of a century, a remarkable ride.

As we planned for the magazine's 50th anniversary, 25 years ago, I sat in the editor's chair, a vantage point for appreciating the magazine and how it began. That first year, 1940, President Franklin Roosevelt won reelection for a third term, 30 million homes had radios (no TV), and the population of Minnesota was 2.8 million. Today, the population is closer to 5.5 million people.

During those 75 years, moments occurred to shape the Volunteer into the magazine we know today. Consider the page size, for instance. Why this digest size? In 1940 the printer's flat-head, sheet-fed press could handle only 5½ by 8 inches. "Just the right size to slip into a side pocket for a weekend at the cabin," the printer's son told me.

The size has worked out just fine. While I waited my turn for the barber's chair, a man took the seat next to me, pulled the Volunteer from his side pocket, opened it to a Young Naturalists story, "Night Fliers," and read about bats (May–June 2013).

How and why the magazine started is another moment in this story. My neighbor Ralph, 94 years old, tipped me off to the magazine's conservation backstory.

"Help me move a piano!" he'd call from over the back fence—code for "Come over for a drink and we'll talk." Ralph told me tales about the early 1900s boom across the St. Croix River a mile north of Stillwater. Cooks in the lumber camps gave Ralph and his pals cookies to eat while they watched lumberjacks corral white pine logs floating down the St. Croix. They'd sort them by owners' marks, then herd them into rafts for the sawmills at Stillwater.

In Ralph's time, stands of white pine grew in every Minnesota county east of the Mississippi. Often 100 feet tall, 2 to 3 feet across, the trees were ideal for cutting into planks to build towns pushing the frontier west.

"Centuries will hardly exhaust the pineries above us," boasted the Minnesota Pioneer during those heady years. The prophecy of Minnesota's first newspaper was off by a few centuries. In 1899 a record harvest of more than 2 billion board feet floated down streams and rivers to the sawmills. By the 1930s the pine forests had been logged.

"Lumbermen knew that the virgin forests were going to disappear," wrote Minnesota historian William E. Lass, "but they simply went on doing what they had always done."

Conservationists remembered the reckless misuse of the white pines, as well as the depletion of wildlife and other resources. In 1931 the new Department of Conservation set out to manage Minnesota's forests, lands, waters, and wildlife.

In October 1940 the first issue of the Volunteer appeared. Its mission: "Conservation Education." So it began. The director of the department's Drainage and Waters wrote a story called "Water Planning and Rainfall." Illustrations included five black-and-white photos of Carlos Avery Game Farm and a drawing of pintail ducks. Contributors "volunteered" stories—no payment. To attract readers, subscriptions were offered free.

In the July–Aug. 1956 issue, the Volunteer's first color-photograph cover appeared: two boys standing at the Itasca State Park marker commemorating the headwaters of the Mississippi River. Color photographs did not appear on inside pages until 14 years later. In the March–April 1970 issue, a four-page insert displayed color photographs of six species of Minnesota mushrooms.

In the late '70s and into the '80s, readers saw a change in the Volunteer's color photos. The editor who preceded me, Charles Wechsler, knew Minnesota photographers whose photos were good enough to appear in National Geographic. A snowy owl poised on a barn roof against a winter moon; an alpha male wolf gorging on a fallen deer; snowfall on pines reflected in a still pond; a yawning fox. As associate editor then, I watched Chuck select color images. He'd insert cardboard-mounted 35mm transparencies into a slide projector. Click-slide, click-slide. Then suddenly an image held on the screen. "There's the cover!" It conveyed joy, triumph, even a note of reverence for a stunning image. Appreciative readers began referring to the Volunteer as "Minnesota's National Geographic."

"There's the cover!" was the moment when a visual style began to emerge. Color photos for covers and inserts boosted the magazine's mission of conservation education.

Kathleen Weflen became editor in 1989, guiding the Volunteer into the computer era. Soon the computer and desktop publishing had replaced the typewriter and typesetting. Text could now be "typeset" right on the screen and photos digitally sized and positioned. The magazine became full color. And its first art director joined the editorial staff to design each issue.

The computer and the Internet expanded the reach of the Volunteer mission. The magazine's website appeared in 1999, publishing stories from the current issue. Before long, it began adding slide shows and videos.

Today, the magazine's newly redesigned website includes an archive that enables readers to call up back issues and stories from 1940 to the present. Say you enjoy walleye fishing. With a few keystrokes on your home computer, you can find dozens of stories on our state fish. Remember Minnesota's renowned conservationist Sigurd Olson? A search of the archive turns up 17 stories and short items, from 1945 to 2002.

Readers can find the magazine's annual report and see what it costs each year to publish a magazine that prints and mails three-quarters of a million copies.

Glad to Thank You.

Readers' support has turned out to be the driving force that has allowed Minnesota Conservation Volunteer to celebrate the 75th anniversary issue you are now reading.

Longtime readers may recall the envelopes that began to appear in select issues in the 1980s. The founders' idea of a free magazine had run its course. The Volunteer began asking readers to donate to the Volunteer Fund to offset rising printing and mailing costs.

The envelopes brought readers' checks and also something else, gratifying notes of support: "Hurrah! We're delighted to contribute." … "If you need more, holler." … "You asked for $10. I'll send $20. Maybe someone else is a little short right now." … "Some of us take the resources of Minnesota for granted. Your magazine lets me see our state from a different perspective." … "The Volunteer is so wonderfully Minnesota."

Readers' financial support proved to be the turning point in the magazine's long story. In 2003 the DNR discontinued its financial backing, and the magazine became reader-supported. The Volunteer had to begin raising money for all its expenses—including salaries and benefits for staff members—"a daunting, if not impossible, task," said editor Weflen, who also became chief fundraiser.

From that crucial moment, the Volunteer emerged as a reader-supported, nonprofit state magazine, the only state conservation magazine to claim that distinction.

Conservation education. It's as important today as it was 75 years ago. But there's a difference. The Volunteer today is less an educator and more a fellow traveler. "I have a story you should hear. It's about a prairie of wildflowers untouched by the blade of a plow. I have a picture to show you. It's a quiet lake on a morning so still you can hear the cry of a loon. Give you joy." A still lake. A loon's solitary call. Tall trees. Stars in the night sky. Nature's harmony. That too is conservation.

The Volunteer breathes aliveness. We're all in this together. You can hear it in Letters: "I keep my own lists of birds, critters, and plants discovered on our own tiny acreage." You find it in Natural Curiosities: "What happens to a fish when it swims over a waterfall?"

That's my take on the Volunteer. You may have other ideas. I'd like to hear them.

Seventy-five years. Waters, woods, and wildlife. Minnesota alive. Minnesota authentic. Slip it into a side pocket for a weekend at the cabin. Give you joy.

Send your views on Minnesota Conservation Volunteer to [email protected].