On a warm afternoon at the end of summer, I follow a trail into a forest along the Kettle River near Sandstone. The leaves of birches and maples are so dense I don't know I'm approaching the edge of the river gorge until the trail drops into a gully of coffee-colored boulders. This Precambrian sandstone was exposed at the end of the last ice age by an earth-scouring deluge fueled by melting glaciers. This sandstone formation extends across the Kettle River and into the rest of Banning State Park. In the 19th century, the sandstone there attracted large-scale quarrying. 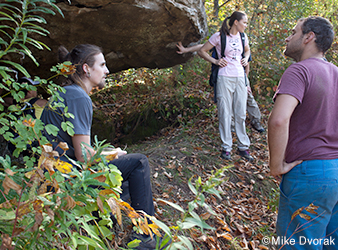 Eldon is open to the public because of conservation-minded landowners, three nonprofits, and the DNR. The previous owners had allowed bouldering. When the property went on the market, the Minnesota Climbers Association began fund raising. The association collaborated with the Access Fund, a national climbing advocacy group, and the nonprofit Parks & Trails Council of Minnesota. The council bought Eldon in July 2013 for $250,000. Climbers raised $30,000 to help with the purchase and to improve access. In 2015 the council sold the property to the DNR. Funding was provided by Minnesota's Environment and Natural Resources Trust Fund, as recommended by the Legislative-Citizen Commission on Minnesota Resources.

Bouldering at Banning is best in late summer and fall after biting insects and poison ivy decline. When the Kettle River is high, it inundates some of the Eldon site.

Because porous sandstone is most susceptible to breakage when wet, climbers must watch the weather and climb only after at least two sunny days have dried rain-drenched boulders. Broken rock could damage the climb and possibly injure a climber.

Bouldering at the state park is allowed only in designated areas. The park office issues maps and the required annual climbing permit. Vehicle permits, also required, are for sale.

Boulders, a few as big as cottages, are strewn among the trees. One of these boulders rises from the ground like a 10-foot-high turtle head. Two young men, Jose Molina and Sean Ferrell, are taking turns climbing it.

Molina sits on his crash pad—a safety cushion—his feet cocooned in tight yellow climbing shoes and braced against the base of the rock. He's patting a small cloth bag of powdered chalk onto protrusions of rock that will serve as his handholds.

"Start with a toe-hook," Ferrell advises.

"Or a huggie," Molina says.

Whichever move Molina makes is a good one because, after a couple of high reaches and some deft scrambling of feet, he stands atop the rock. He has solved the problem.

"In the last five years, there's been the largest explosion of climbing gyms and bouldering," says Nicholas Oklobzija, a local climbing expert. Unlike roped climbing and its requisite arsenal of expensive and technical gear, bouldering requires only climbing shoes, crash pad, and chalk. And while roped climbers relish heights, bouldering makes room for those who enjoy the motions of climbing more than the exposure of being high off the ground.

"I'm afraid of heights," says Emily Merhar, another boulderer at Eldon. "I get more on edge [during] roped climbing. Bouldering is more pure." For her, a problem named Best Boulder in Minnesota, on a knuckle of sandstone rising 15 feet over a spit of sand along the river, is a good fit. The problem she's climbing is graded V5. Problems in North America ascend in difficulty from V0 to V16.

Naming and grading rights go to the first person to finish a problem. The hardest climb in Eldon is a V11 called The Raven—first climbed and named by Oklobzija. Eldon has about two dozen problems, though surely more will be established this summer.

Across the river, the newly opened climbing area in Banning State Park also has about two dozen problems so far. It begins near the Teacher's Overlook picnic area and extends nearly half a mile downriver beneath the Quarry Loop Trail. Unlike Eldon, where most problems are on free-standing boulders, here the majority of climbs are on the river valley cliff.

Ferrell has high praise for the new venue. "Best climbing for 500 miles," he says. "The rock quality is good. It forms great holds." And he enjoys "the quiet of this place."

Molina starts up the steep overhang of the turtle's throat. There's not much to grab onto. He soon falls.

"How'd you do that?" he asks Ferrell, who had already scaled the rock. He wipes the bottoms of his shoes on the crash pad and tries again, clinging to the rock by his chalky fingertips and the rubber-clad tips of his toes.

"That's it! That's it!" Ferrell cries. "Heel-hook your way around the corner!"

Molina lifts a foot from a pimple of rock and falls. He sits brooding.

"You lost some skin," Ferrell says.

As Molina studies a smear of blood on his hand, the disappointment washes away from his face. His flesh has failed, but his resolve hasn't.

Ferrell and Molina climb on.

"The first time I did it, I just knew this was something I was supposed to do," Ferrell says. "It provided fitness, a social activity, the most perfect excuse to go outside and appreciate where I am. Purpose."

"There's meaning to a rock with a name," Molina says. "There's a mental and physical challenge, and it's always unique—a new puzzle to figure out. It ticks a lot of boxes."

Another day, I stroll into the boulder woods searching for a problem that will not require tendons of titanium or take me too far from the ground. I'm just looking for something fun to climb on. The sun shines warm through building clouds, and I am alone in a woods speckled with ancient boulders.

I warm up on a gently overhanging 9-foot-high shelf of sandstone with a rock fin running up its face. I latch onto the fin in a position called a lie-back, which requires me to hang from a vertical feature by my hands and arms and press my feet against the rock. My body swings to the side of my higher hand. The required balance is complex and pleasing.

Hanging in the lie-back, wondering if I am stuck, I notice flakes of lichen and constellations of cracks and nubbins. This miniature topography is easily missed from the ground. The old stony bumps and fissures, which can keep me from an express ride to my crash pad, take on characteristics of friend or foe.

I finish the problem and find another on a boulder shaped like a boat. Big enough to be seaworthy, the boulder extends from a sandstone slab foundation and ends in a bowlike overhang. The rock is furrowed with ripples that beg gripping. I consider Ferrell's assertion that this is the best climbing for 500 miles. I have heard others offer the same opinion. The fine grain of the sandstone is fantastic. It holds your grasp without abrading, and many of the holds are simply ideal—open curls of stone just deep enough for fingertips. Seemingly designed specifically for climbing, they are actually products of millennia of natural processes. This is especially appreciated because Minnesota has relatively little vertical rock, and what's here is often slippery—except up north in the Canadian Shield where the rough basalt can be as unkind to skin as a cheese grater.

I manage to palm the top of the boulder with my left hand. A plate-sized piece of moss slides off, and my hand goes with it. I fall. Vegetation loss is a concern in climbing areas. Banning State Park also contains very important natural communities, rare species, and historic sites. That's why bouldering in Banning is allowed only in a limited area, at least until the Department of Natural Resources can quantify its environmental impact.

Still struggling up the boulder, I straighten both arms out, zombielike, across its top. My toes scratch against the rock face until finding purchase. Now I can push up on my palms and clamber to the top. Rain starts to fall, and, done for the day, I climb off the rock and catch my breath under its overhang, my arms shaking from exertion and excitement.

Spider on a Web.

Across the river in Banning one afternoon, I watch a young local climbing expert named Carter Stritch move like a spider for 25 lateral feet along the roof of a deep overhang. The rock is smooth and ranges in color from rust to that of murky motor oil. He traverses the roof on a weblike network of black cracks. Later, I try it. I latch onto a bulbous wrinkle with both hands and work my feet up until I am wedged parallel to the ground. I'd pictured this was where I'd begin moving, like Stritch had, in a fluid outpouring of strength and grace. I look at the next handhold. My arms scream. I might as well be trying to reach out and grab the polished stone of the Taj Mahal.

After several ineffective lunges, I recline on my crash pad and stare at the overhang roof. My gaze traces the rock's shifting lines and colors, as I imagine a sequence of moves. If people can move in such ways for the simple purity of the experience, what other unlikely feats are possible?

The crash pad is comfortable, as is the open air and the Kettle River's rapids resounding in my ears. I know it is time to go, though I remain a while longer.