Lac qui Parle, a 5,700-acre lake in western Minnesota, takes its name from a French translation of a Dakota Indian phrase meaning "the lake that speaks." Lac qui Parle speaks in the language of birds. It is at the heart of the conservation success story of Canada geese. And it is a prime destination for waterfowl hunters in fall. Its most spectacular attraction, though, may be the spring bird migration. 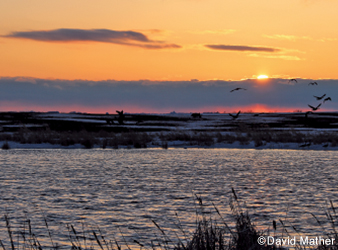 Launch a canoe in the park or the WMA. The WMA is within the upper reaches of the Minnesota River State Water Trail, which begins at Ortonville. Rent canoes or kayaks at park headquarters. Reach park and WMA staff at 320-734-4450.

From late March to early May, a visitor can watch waves of waterfowl, songbirds, and raptors at the lake on the Minnesota River, as well as the surrounding 952-acre state park and 33,000-acre Lac qui Parle Wildlife Management Area and State Game Refuge. With 253 bird species documented, this place always has something to see.

The action starts early, when spring still looks like winter. Canada geese occupy the margins of ice-free lakes and rivers on the way north to their nesting grounds. A cold snap will stop some geese and make others turn back, and soon a crowd forms on Lac qui Parle, where open water often persists near the lake's dam outlet. More than 150,000 geese can gather on the lake, according to David Trauba, Department of Natural Resources area wildlife supervisor.

The Lac qui Parle area is a bird paradise with a vast mosaic of habitat types—floodplain forest, wetlands, prairie, and agricultural land—along a major migration flyway. The DNR and Audubon Minnesota designated Lac qui Parle WMA as one of the state's 54 Important Bird Areas. DNR Nongame Wildlife Program supervisor Carrol Henderson recommends birders drive the back roads around the WMA to scout for birds. On top of the rich parade of regular migrants, nesting pairs, and resident species, unusual species such as Swainson's hawks and marbled godwits can pop up at any time, giving birders a chance to add to their life lists.

The lake's southern end attracts spectacular gatherings of migrating waterfowl. Sometimes intensely noisy, the birds' honking and quacking gives voice to the lake's name. The birds don't react to cars but are wary of humans on foot. To elude detection, walk to the park's wooden overlook, which can serve as an impromptu bird-viewing blind.

While fall migration here can last up to eight weeks, spring migration is shorter, and its timing is less predictable. Big flocks—geese, ducks, swans, pelicans, or shorebirds—can change day to day and year to year. In spring, geese and tundra swans come first, followed closely by ducks. By April, sandhill cranes and insect-eating birds, such as barn swallows and purple martins, arrive.

After the spring hubbub on Lac qui Parle dies down, the 5,000-acre Marsh Lake takes the spotlight with arrival of American white pelicans by early May. Once a rare sight, pelicans there now form one of the larger colonies in North America, hosting as many as 17,000 nesting pairs. The islands are off limits to humans to protect vulnerable nesting areas. Best viewed with binoculars or a spotting scope from the eastern side of the lake, the pelicans frequently fish below the dams on Marsh Lake and Lac qui Parle.

At the southern edge of Marsh Lake, a wooded stretch of the Pomme de Terre River offers a secluded place to explore by canoe or kayak. The river, often open when the lakes are still frozen, is a favorite spot for wood ducks and bald eagles. Eastern bluebirds build nests in hollow trees along the banks.

American golden-plovers provide a grand finale for spring migration, with a supporting chorus of songbirds. The plovers arrive in early May in small groups of about a dozen birds. These birds, Henderson says, "are flying over the prairie just like they would have done thousands of years ago."

Just 60 years ago, following a century of overhunting and habitat loss, wild Canada geese were scarce or locally extirpated throughout North America. Lac qui Parle WMA has focused on conservation through habitat enhancement and goose reintroductions, beginning in 1957. The following year, about 9,000 acres of the WMA were designated a state game refuge. Rosemoen Island, a restricted area, was the center of the goose restoration project. Using decoys and a record player blaring goose calls, then-WMA manager Arlin Anderson lured 125 migrating geese to the island from Manitoba's eastern prairie population. Later, wildlife managers also reintroduced giant Canada geese from Carlos Avery Game Farm near Forest Lake. Because of this work from the late 1950s to mid-1960s, geese are plentiful at Lac Qui Parle today, says Trauba.

Lac qui Parle has been an important place to the Dakota people for thousands of years. Today, archaeological sites of villages and burial mounds blend with the landscape. Park visitors can see interpreted sites of Fort Renville and the Lac qui Parle Mission.

Joseph Renville was a fur trader of Dakota and French heritage. From 1826 to 1846, he ran the stockaded American Fur Company post at Lac qui Parle. Renville encouraged missionaries to settle at the lake, and in 1835 they founded the Lac qui Parle Mission. The missionaries focused on translating the Bible and other religious texts into the Dakota language. These efforts became instrumental in developing the first Dakota-English dictionary.

Explorer and cartographer Joseph Nicollet wrote in his journal of a visit to Lac qui Parle in July 1838. He said Renville and Yankton chieftain Wahananton warmly welcomed him. He described the chieftain as "ornamented with the feathers of a warrior, the green glasses, a pipe and a war club in his hand, his rich leggings and his embroidered tunic, his coat of buffalo skin, telling the history of his wars."

The fur post and the mission closed after Renville's death. Nearly a century later, the Works Progress Administration built a wooden chapel at the mission site. The chapel houses a small museum, run by the Chippewa County and Minnesota historical societies. For information, call 320-269-7636.

The giant landscape model in the state park's Map Building is a destination itself. The WPA constructed the building and the 50-foot-long concrete model in 1940–1941. Designed by artist George Andriotti, the sculpted map shows the region's lakes, rivers, and dams and interprets the Depression-era Lac qui Parle flood control project.

From the parking lot, the Map Building is a quarter-mile hike through floodplain forest or a few miles if you take riverside trails. The scenic trails offer solitude and a chance to see white-tailed deer, bald eagles, and songbirds.

The map, sanitation, and kitchen buildings are listed in the National Register of Historic Places. The lower campground became the original extent of the state park in 1941. Other land acquired for flood control later became the nucleus of the WMA in 1957.