Mark Halls has found a way to improve water quality while producing profitable beef. On a September day, the Pope County farmer points out a former cornfield that is planted in a mix of cover crops—oats, turnips, rape, and canola. It's not far from the East Branch of the Chippewa River. Halls explains to neighboring cattle producer Andy Marcum that he has moved 32 cow-calf pairs through this 9-acre plot four times during this growing season. This method, called managed rotational grazing, breaks up bigger pastures into smaller paddocks. With different plant species that thrive under varying weather conditions, the field provides low-cost feed throughout the growing season. By grazing cattle here, Halls saves the expense and labor of mechanically harvesting and storing feed. Rotational grazing and continuous cover makes his hilly land more productive and less of a threat to the health of the Chippewa River. By keeping soil in place and filtering storm-water runoff, cover crops can reduce nutrient and pesticide runoff by 50 percent and sediment in water by 75 percent. 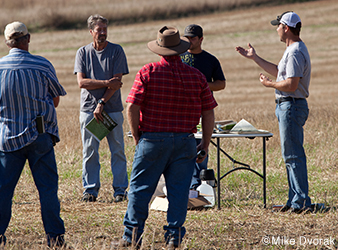 The Power of Networks

"These groups problem-solve together to find what works," says Moore.

At farm field days, landowners have discussed planting wildlife feed plots to draw deer away from cash crops and rotational grazing on wildlife refuges. Networking has helped some farmers gain access to cost-share funds to establish cover cropping and grazing systems, for example. Thus far, the landowner groups represent some 4,400 acres of land, about 0.3 percent of the 1.3 million–acre Chippewa River watershed.

Halls explains that working with the nonprofit Chippewa 10% Project helped him see the benefits of converting the cornfield. Marcum, an organizer for the Land Stewardship Project, sees cover cropping as a "gateway practice" that could lead farmers to establish perennial grasses, including native prairie species, the ultimate in long-term, water-friendly landscape cover.

"I didn't know I was being conservation minded [by grazing cover crops]—I just needed feed for my cattle," says Halls.

Launched in 2010 by the Chippewa River Watershed Project and the Land Stewardship Project, the Chippewa 10% Project helps curb the watershed's flow of polluted runoff. It does this by working with farmers to find profitable ways to keep the land covered with vegetation beyond the roughly 110-day growing season for corn and soybeans, which dominate an increasingly large swath of western Minnesota.

Finding practical ways to reduce runoff is important locally and regionally. The 1.3-million acre Chippewa River watershed covers most of Pope, Swift, and Chippewa counties and splashes over into five others in west-central Minnesota. The Chippewa River's flow averages 106 billion gallons annually, or about as much water as Minneapolis residents suck out of the Mississippi every five years. Agricultural lands make up three-quarters of the Chippewa watershed, and it is the single biggest watershed tributary to the Minnesota River, one of the most polluted waterways in the upper Midwest.

Runoff from the Minnesota River eventually reaches the Mississippi and the Gulf of Mexico. In the Gulf, water laced with fertilizer escaping crop fields has caused a dead zone, where lack of oxygen makes survival virtually impossible for aquatic life.

There is a good reason Marcum is excited about seeing more cover on Mark Halls' fields throughout the year. Research by the Chippewa River Watershed Project shows that where at least 34 percent of the land in the watershed is covered in plants year-round, water quality meets state standards for clarity and chemical contamination. On average, 24 percent of the Chippewa watershed is in grass or hay, trees, and other perennials. So adding 10 percent more coverage would tip the balance toward meeting clean water standards.

In partnership with the University of Minnesota, the Department of Natural Resources, and other government and conservation groups, the Chippewa 10% Project relies on kitchen-table conversations with farmers to explore ways to increase the amount of vegetation covering the land year-round. "We're trying to get away from prescriptive conservation practices and more toward helping farmers see options," says the Land Stewardship Project's Steve Ewest, who has done detailed mapping of the watershed.

Adding 10 percent of continuous living cover to the Chippewa River watershed can make a difference, but not just any 10 percent will do, explains Ewest. The project targets conservation practices where they can produce the most benefits, rather than applying them indiscriminately across the landscape. That's where a tool like geographical information systems technology comes in. GIS provides a 3-D map of the watershed, showing everything from drainage patterns to where erosion will likely occur. Such technology makes targeted farmland conservation more plausible by identifying strategic spots in a watershed that can produce the biggest bang for the buck, says Matt Liebman, an Iowa State University agronomist.

An extensive study of farmland conservation techniques used in Minnesota and other states in the upper Mississippi–Ohio river basin found that by targeting key areas with a mix of practices—everything from cover cropping to reconstructed wetlands—fertilizer runoff could be cut by 45 percent. (That reduction is the federal Environmental Protection Agency goal for remediating the Gulf's dead zone.) The study concluded that proper targeting could displace as little as 1 percent of cropland.

And proper targeting can help reduce "nonpoint" pollution—contamination that comes from many disparate places rather than one major source such as a sewer pipe. "What Chippewa 10% is doing is really in line with where we need to be going to address nonpoint-source pollution," says Skip Wright, a district manager for DNR Ecological and Water Resources.

Liebman knows firsthand how zeroing in on hot spots can produce outsized benefits. On a summer day in central Iowa, he gave a tour of a 200-foot-wide strip of native prairie halfway up a hillside otherwise planted to soybeans. Research shows that planting a row-cropped field to as little as 10 percent prairie species can reduce the amount of soil and nitrogen that escapes the field by 95 percent and 90 percent, respectively. The strips also provide habitat for grassland songbirds and pollinators.

Over the past few years, Marcum and Chippewa 10% coordinator Robin Moore have had hundreds of conversations with landowners in the watershed, searching for common goals and noting challenges. For example, farmers in the watershed's lower reaches—where row crops take up 95 percent of farmland and nitrogen pollution is the worst—are finding cold, wet soils can stymie conservation practices such as no-till farming.

The upper reaches of the watershed have more perennial plants and include natural lands managed by The Nature Conservancy, the DNR, and the U.S. Fish and Wildlife Service. There, the challenge comes from invasive species such as cedar, sumac, and Siberian elm. Crowding out grassland, including native prairie and pasture, these invasive plants cause problems for cattle producers as well as natural resource managers. Farmers and other landowners share the goal of healthy grasslands.

During 2014 Marcum and Moore worked with seven landowners representing 1,500 acres in the Simon Lake area. They helped with invasive species removal and set up plans that use rotational grazing and other practices to curtail plant pests while improving grasslands. Aerial drone photos help track progress. This initiative has not only helped farmers and natural resource experts join forces, but it has also cultivated connections with people who bought land for hunting and other recreation. Some of these nonfarming landowners borrow their neighbors' cattle to help trample invasives and provide the manure needed for jump-starting grass growth.

Part of the community effort means giving watershed residents an opportunity to learn what's in their neighborhood from a natural-world point of view, and thus why it's worth protecting. In July 2014 and 2015, the Chippewa 10% Project hosted BioBlitzes, daylong gatherings to inventory the plants and animals on a recently grazed prairie owned by The Nature Conservancy near Simon Lake. Farmers and townspeople hiked the land with field guides in hand, working with naturalists to identify as many species as possible.

"The more you know the plants and birds around you, the more ready you are to take care of them," says Moore.

And once you appreciate what's out there, a new world of possibilities—utilitarian and otherwise—opens up. Several weeks after the first BioBlitz, Marcum and local beef cattle producer John Reed walked a knob of glacial till covered in native prairie. Reed, who owns this land, had recently harvested prairie seed there so he could plant it in nearby grazing paddocks. He's hoping prairie plants supply feed for his cattle even during midsummer when cool-season pasture grasses go dormant. Native forbs and grasses aren't as palatable to cattle as Kentucky bluegrass is, but Reed hopes their warm-weather tolerance will make it possible to increase the number of cattle he can graze on each acre.

"I'm sure we can triple our production," he said. But the size of his herd wasn't the only thing on the rancher's mind. As he and Marcum waded through the grasses and forbs, Reed called out the names of plants—big bluestem, wild rose, purple coneflower, prairie gentian. "There's some real beautiful stuff out here," he said.