I'm sitting in a clearing in a remote corner of St. Croix State Park. Dusk falls early this November evening, and the gibbous moon sends its soft phosphorescence down through the sky. Cradling a Remington .30-06, I feel each breath coming in and out as I look across the land below. Behind me, my hunting mentor Jay Johnson whispers, "Deer coming from your right."

A few years earlier, this scene would have been unimaginable. I didn't grow up in a hunting family. Almost no one I knew hunted. I was a passionate hiker, an unabashed tree hugger—and a person really frightened of guns. I didn't understand why people would hunt and kill. I didn't criticize hunting, but I certainly didn't get it. I've always felt that deer are magical: the way they move so gracefully, appear out of nowhere, and float between the human world and the wild.

But now I was ready to shoot. To kill. 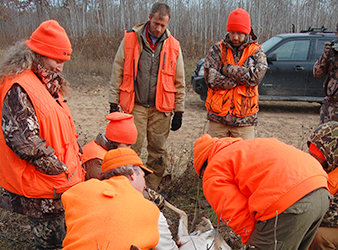 In North America, hunters have traditionally been among the strongest advocates for conservation of public land. Recruiting new hunters is one way to ensure that Minnesota's wildlife and wild lands are protected and managed well into the future.

The Adult Learn to Hunt White-tailed Deer Program was made possible, in part, through state legislation in 2013. As part of the agency's hunter recruitment and retention efforts, the legislation allows the DNR commissioner to establish special hunts for adults to learn to hunt. Previously only youth were allowed to partake in special hunts. Both adult and youth hunter-recruitment programs rely on experienced hunters to volunteer to serve as instructors and mentors.

Extending this learning opportunity to adults makes good sense, says Jay Johnson, DNR hunting recruitment and retention coordinator. Johnson had noted people's growing interest in eating sustainable foods and in sourcing their own wild protein. He saw this interest as a catalyst for attracting more people to hunt deer for venison.

Johnson believes teaching adults to hunt will have a ripple effect. "The most influential person on a youngster's recruitment into hunting is a parent or guardian," he says. "So if we can get more young adults hunting, hopefully we can influence them in a way that they will someday teach their kids to hunt."

The learning objectives of the adult program are straightforward, Johnson says: "We take people who have little skill or knowledge and ethics related to hunting, and we move them to a point of greater knowledge, ethics, and skill where they are better prepared to become hunters if they choose to. Participant evaluations tell us we are achieving our objectives."

This past spring the DNR offered a similar program to adults interested in learning to hunt wild turkeys. Both the white-tailed deer and turkey hunting programs will continue if enough mentors step forward to assist the new recruits.

To join the program as a mentor or a student, contact James Burnham at [email protected].

The idea of hunting deer didn't enter my mind for my first 35 years. But three years ago, I started studying ecology and ancient cultures more deeply, and I began to see that the human relationship with wild animals and hunting is primal. I realized that modern food systems make it difficult to be in clear relationship with the sources of our sustenance. If I were to continue to eat meat, I wanted to directly face the implications of eating creatures that once breathed and walked the earth.

In March 2014, I attended a class for beginning adult hunters held at Seward Community Co-op in Minneapolis. Johnson, hunter recruitment and retention supervisor for the Department of Natural Resources, presented the basics of deer hunting. He announced a new DNR program, Adult Learn to Hunt White-tailed Deer, which would culminate in a mentored hunt at St. Croix State Park.

After class, I spoke with Johnson and expressed my uncertainty about being ready to kill. He assured me there would be no pressure to shoot. He affirmed that taking a life was a serious thing, and that he wanted thoughtful people in the program. Ten slots were available, and I was happy to find out a week later that one of them was mine.

The core of the program would consist of four field outings: two days of hunting education and shooting practice, a scouting excursion, and, a week later, a weekend hunt. We would learn about deer anatomy, places to hunt, deer sign, tree stands, tracking wounded deer, and the ethics of hunting. We would also participate in two firearms training sessions at the Forest Lake Sportsmen's Club to practice safe and effective use of our rifles. As a mentor, Johnson would try to impart over a few months knowledge that had taken him years to learn growing up in a hunting family.

On a cool, sunny October day, Johnson and I roamed St. Croix State Park to practice some of these skills and scout for a place to hunt. Johnson detected scrapes, rubs, and other deer sign I never would have seen without his keen eye. He gave me a primer on the deer's acute senses of smell, sight, and hearing and noted the importance of staying downwind of the animal. He spoke about the deer's habits of feeding at night and bedding down during the day. He encouraged me to observe as much as possible, and the more I paid attention, the more I noticed numerous deer trails winding through the birch forest and deep tree rubs marking the territory of particular bucks. I began to see that hunting was much more than just shooting a gun. Hunting required extensive hours in the woods, walking, observing, and learning. Hunting could be a powerful way to connect more deeply with plant and animal life.

A week later, I left work early to drive north to the state park for my first deer camp. We would be participating in a special state park hunt designed for first-time deer hunters before the start of the official rifle-hunting season. Our group of 10 participants and 10 mentors stayed in state park guesthouses, where we shared lively conversation along with a delicious potluck of antelope sausage, homemade applesauce, and woodcock poppers—a snack made of woodcock breast, cheese, and bacon. I could easily understand why so many Minnesotans look forward to returning to deer camp every fall.

Well before sunrise the next morning, Johnson and I headed to our blind. The temperature had dropped below freezing, but layers of wool clothing and Johnson's engrossing stories kept me comfortable. Our trail mix tasted so great that I took some in each hand and found myself totally unprepared for the sudden appearance of a spike buck 10 yards away. I dropped my snack to the ground, just as the lucky buck bounded off into the forest.

That afternoon we moved into open country overlooking a valley. I set up with my back against a pine tree while Johnson piled brush behind me to break up my outline. We sat together in easy silence for hours and watched trees and prairie grasses sway in the wind. A wedge of trumpeter swans soared across the clear blue sky. We didn't see any more deer. But sitting there, alert, almost meditative, with so much magnificent nature all around, I felt content.

Johnson and I returned to the same spot the next morning for our second day of hunting. Deer trails crisscrossed the area, so we found it strange to again encounter no deer. After three hours of being stationary, we decided to try some still-hunting, moving through the woods as slowly as possible, frequently pausing, and hoping to catch our quarry by surprise. We walked and observed carefully for an hour before finding the reason deer were so scarce: a wolf den surrounded by scat and fresh tracks, only 100 yards from where we had been sitting earlier that morning.

Later that day, we hiked into the far northeastern portion of the park, where another mentor had spotted several deer the previous day. Johnson and I found high ground where we could see hundreds of yards into the distance. Like a Zen teacher, Johnson told me to stay absolutely still—essential for successful deer hunting. After several reminders, I finally got the message and settled into deep stillness, becoming more and more aware of everything around me.

At dusk, during the last hour of legal hunting, Johnson saw several deer moving hundreds of yards away. I had trouble seeing them, so fluidly did they blend with the darkening landscape. But after focusing my attention for several minutes, I was able to glimpse a doe in the distance, far out of shooting range. How wonderful to see this elegant creature moving gently through the dusky autumn grass.

With only five minutes of legal shooting time remaining, another doe suddenly entered my peripheral field of vision. Unaware of our presence, she came close, less than 25 yards from where we sat.

Johnson whistled lightly. The doe stopped and looked our way. Time seemed to hesitate; the scene intensified. I aimed my rifle and shot. I only faintly remember hearing the boom.

The doe dashed 20 feet, then crumpled to the ground. Dazed, shaking a little, I slowly approached the body. Johnson prodded it gently and confirmed my kill. I had shot the deer through the heart.

A mixture of awe and remorse coursed through me. As I caressed the doe's smooth, still-warm fur, I noticed her long eyelashes and the deep, dark mirrors of her eyes. I wondered how exactly she had experienced this beautiful land. I felt sad—and somewhat shocked—that I had just used a gun to end this creature's life. I breathed an apology and thanked the deer for its life.

Johnson field-dressed the deer, while I held her chest cavity open. Seeing and smelling blood, lungs, and intestines, I fully comprehended the meaning of the word visceral. Afterward, I began dragging the deer the mile back to our car. Although Johnson eventually rescued me with a cart, I felt for a while the full weight of what I had just done.

Two nights later, we completed the transformation of the animal to meat. Under the guidance of mentors, I worked at skinning and butchering my kill. I was surprised at how much time and effort this process required. It was not like watching it on TV or buying meat at the supermarket. We'd started working after dinner, and at 2 a.m. I arrived home, proud and thankful for the 50 pounds of free-range, forest-fed, vacuum-sealed venison that my family and I would enjoy over the next year.

As a teacher and student of culture and mythology, I couldn't help but bring certain philosophical reflections into my experience. I know that people have approached hunting from many different perspectives. I accept these differences but also know that I need to respect how my mind and heart make sense of it all.

It seems to me that hunting can be approached as a ceremony, an immersion into the mysteries of nature, into the sublime, multidimensional web of life and death that supports us all. I can't help but think that human life inevitably involves sacrificing and eating other living things, and that the awareness and intent with which one goes about this necessity—whether one be omnivore or vegan—is important. There's a price to pay for the way we live, and that price is something we need to see, something we need to feel.

As hunter and anthropologist Richard Nelson suggests, if we would more deeply consider the water, plants, trees, and other organisms that continually sustain our lives, we might feel more obligated to care about the well-being of the land and animals that feed our bodies and nourish our souls.