I couldn't blame the father for his concern. He'd found three badgers living in a burrow near the sauna at his rural home near Duluth. With little kids, dogs, and now a family of badgers living in close proximity to one another, he called his neighbor and my friend Julie—an environmental educator—for information. Badgers, you see, have a reputation for being ornery. 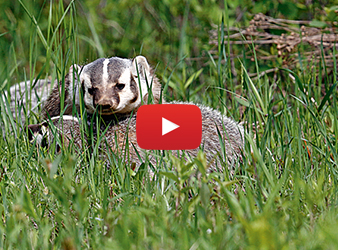 Watch a pair of young badgers frolic and follow mom around outside the den.

"Badgers are very bright," says DNR assistant regional manager Chris Weir-Koetter, who has done extensive research on them. "They have to be: They are predators and must problem solve in order to capture their prey underground. One badger I observed dug a tunnel parallel to a ground squirrel runway and waited until the squirrel zipped by. The badger then burst through the thin dirt tunnel divider and grabbed it."

The DNR classifies the badger as a species of greatest conservation need under the State Wildlife Action Plan. Habitat fragmentation on the prairie, where badgers are most commonly found, poses the biggest threat.

While trappers may legally take badgers, they rarely target them these days. More badgers are probably killed by people who fear them.

"Badgers just want to be left alone," Weir-Koetter says. "Yes, they'll bluff charge, but there's no record of anyone ever being mauled by one."

If you spot a badger, email its location to the DNR at [email protected]

Julie allayed her neighbor's fears and then called me, knowing that I'd welcome a chance to photograph the badgers. I went to the den site on a day in early June and, with the landowner, gingerly crept to a spot within sight of the den. A female badger and two cubs were sunning themselves. The cubs were nearly as large as the mother—old enough, from what I had read, that they would move on soon to forage more widely. I encouraged the landowner to be patient and keep clear.

Over the next few weeks, I enjoyed photographing the badgers as they explored and played. The landowner and his family grew to enjoy them too.

Bad Rep, Bum Rap. The American badger (Taxidea taxus) has a reputation for ferocity. That is a bum rap. Weighing 17 to 24 pounds and measuring 20 to 35 inches long, an adult badger is armed with impressive inch-long claws and sharp teeth. This low-slung, slow-moving animal snarls and hisses when surprised and defends itself with vigor when cornered. But a badger never goes out of its way to seek trouble. We rarely know a badger is around until a sudden encounter with us or our dog. Left alone, badgers are remarkably peaceful—except to their prey.

Found in all parts of Minnesota except the far northeast, badgers feed largely at night on a variety of other animals. The fastest-digging animal on the planet, the badger tunnels after its primary prey—mice, ground squirrels, gophers, and other rodents. It also goes after snails, grasshoppers, bird eggs, insect larvae, and honey.

Badgers dig dens as deep as 10 feet below ground, with 30 feet of tunnels in a typical den system. They often have more than one den within their home range of about a square mile, moving between dens once a month. Although not true hibernators, they spend almost all winter underground, mostly asleep.

Badgers mate in August or September. After developing a bit, embryos stay dormant until implanted in the uterus in mid- to late winter. Then they develop in just six weeks. Baby badgers are born between March and June. Blind and nearly hairless, they are nursed for up to three months. They will leave their mother when they are 5 months old.

Family Antics. I visited the site almost daily, concealed from the badgers by brush and camouflage clothing, frequently waiting for hours while providing breakfast for clouds of mosquitoes. Many days, I did not see the mostly nocturnal badgers.

On those lucky mornings when the badger family showed up, I often chuckled at their antics. Like many young animals, the badger siblings played, although in slow motion. They wrestled with the speed of sloths. One would raise its paw at another and, instead of delivering a quick whack, would let it fall in a leisurely thump. Sliding down the slope from the den entrance, they looked like they were moving on molasses.

The cubs often teased their mother, who lay patiently as sharp baby teeth tugged on her loose, elastic skin. I saw her reprimand a cub only once, when it tried to nurse. She gave it several quick nips. The ensuing squall indicated the cub understood the free lunch was over.

Eventually the cubs began to explore farther from the den. Low, squat, and wide, they resembled furry amoebas shambling through the grass.

Although badgers have excellent hearing and sense of smell, their eyesight is poor, and the cubs often peered in my direction, trying to make out what I was.

One morning, the family emerged from the den, climbed down the slope, paused for a few minutes in a grassy patch, then disappeared into the aspen forest. It was the last time I, or the landowners, saw any of them.