The little cabin on Sullivan Lake in Morrison County is trim and tidy, with a fresh coat of green paint, a meticulously mowed lawn, and a rock-rimmed fire ring that looks like a great place for a marshmallow roast. But as Paul Kuske, conservation officer for the Department of Natural Resources, hops out of his patrol truck for a closer look, the scene loses a bit of its luster: Singed bits of newspaper skitter across the grass, propelled by a late-summer breeze coming off the lake.

Rummaging through the ashes, Kuske soon identifies the remains of household garbage, including melted plastics. A brass nozzle protruding from a tubular chunk of charred material tells him that a garden hose was torched.

Of Minnesota's 87 counties, 31 have passed no-burn resolutions that ban all garbage burning and close a loophole that allowed farmers to burn agriculture-related waste. These resolutions help clear up confusion about burning laws and hold all citizens in the counties to the same standard. Some MPCA solid waste officials hope for statewide no-burn legislation. 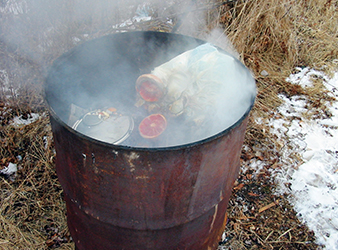 Enforcers can do only so much to cut down on illegal burning. But anyone can replace old habits with new ones:

Burning things such as plastics and rubber releases the potent carcinogen dioxin and other toxic compounds into the air, soil, and water. Almost all garbage in the modern waste stream releases toxins when burned, and these toxins can harm human health as well as local wildlife and habitat. Garbage burning also starts wildfires every year in Minnesota.

All morning Kuske patrols the county, pointing out evidence of garbage burning in open fires and, more commonly, in burn barrels—usually repurposed 55-gallon drums. One barrel has boxes and garbage bags sticking out the top and an inventive PVC-tube air intake at the base. One is made from a clothes-dryer drum with ventilation holes blasted by bullets. Another, crammed with toy packaging and half-burned fireworks, looks like an old-fashioned woodstove. All are illegal.

Burning garbage, whether in a fire pit or a burn barrel, has been against the law for decades in this state. But it appears that many Minnesotans are still unaware, confused, or defiant when it comes to burning garbage. In a 2010 survey conducted by the Minnesota Pollution Control Agency, 33 percent of rural Minnesotans said they sometimes burn trash. Kuske and MPCA inspector Jake Brady are two of the faces of the state agencies that enforce Minnesota burning laws.

Where There's Smoke. All across Minnesota, people are burning garbage. They are jamming cabin trash into barrels and igniting it like Grandpa did. They are tossing cans, bottles, bait containers, and spent shotgun shells onto campfires. They are cleaning out their barns and garages and basements and making bonfires of abandoned belongings. They are stacking up pallets way out back, setting them ablaze, and tossing an old couch on top—after midnight. Sometimes a landowner demolishes an entire house or building, burns the debris in a pit, then buries the ashes. The toxins produced by these burns add up to a major source of pollution.

"The open burning of household waste here in Minnesota contributes to 50 percent of the known dioxins generated in the state," says Henry Fisher, MPCA coordinator for illegal burning abatement. Nationally, garbage burning is the largest source of human-caused dioxin emissions, according to the U.S. Environmental Protection Agency.

Dioxins occur naturally but in much smaller and more dispersed amounts than those released when people burn plastics or chlorinated compounds. Dioxins are ubiquitous in the modern waste stream because plastics and chlorine are ubiquitous in modern consumer products and packaging. Even a sheet of lily-white paper emits dioxins when burned. "Chlorine is used to essentially bleach paper," says Fisher. "It's used to clean just about everything that we put out for consumption."

Dioxins released by the low burning temperature of a garbage fire become airborne and land on land or water. They persist in the environment and bioaccumulate, ascending the food chain as they enter the bodies of successively larger animals. Human beings take in dioxins when eating fish, meat, and dairy products derived from creatures that have been exposed to the chemicals.

Dioxins, in addition to being carcinogenic, belong to the class of chemicals known as endocrine disruptors, which can harm human health in very small concentrations. "Studies have shown that it also affects the reproductive aspects of fish and birds and mammals," says Fisher. "Those dioxins don't have to fall far from burn barrels that are out in the backyard, next to the lakeshore, to have an impact on the whole food chain."

Trash burning can emit many other toxic compounds. Benzene, linked to leukemia, is in polystyrene-foam products such as coffee cups and packing foam. Formaldehyde is a carcinogen that can also irritate skin, eyes, nose, and throat. It is in pressed-board products such as plywood, particleboard, and fiberboard, often used in household furniture. Plastics and dyes may contain polycyclic aromatic hydrocarbons, also carcinogenic. Many other toxins join the mix if the burner tosses things like batteries, electronics, paints, or herbicides onto the pyre. And virtually any fire produces fine particulates that can enter lungs. If anyone is under the illusion that their trash fire is harmless, they are almost certainly wrong. As one awareness-raising MPCA campaign says: "If you're burning garbage, you're making poison."

Know the Laws. It's pretty cut-and-dried what can and cannot be legally burned in Minnesota. A wood-fueled campfire is OK—provided it's in a ring no more than 3 feet in diameter, the flames reach no higher than 3 feet, and a 5-foot area around the fire is cleared of combustible material.

The only type of household waste that's legal to burn is clean, unpainted, untreated wood scraps. If an area has a temporary burn ban because of dangerously dry conditions, no fires are allowed.

It's also legal to burn brush such as dry leaves, plant clippings, and other yard waste if you obtain a permit to use either an open fire or a burn barrel constructed to legal specifications. (Local fire wardens and the DNR issue $5 annual permits. A permit isn't needed for any open fire if at least 3 inches of snow cover the ground or if you're using a legal burn barrel between 6 p.m. and 8 a.m.)

In his 27 years as a conservation officer, Kuske has never seen a burn barrel built to legal specs. Most owners of illegal barrels, when questioned, say they use them only for yard waste. It usually takes only a peek inside to see otherwise.

Why do so many Minnesotans burn their trash? For many rural residents responding to that question on the MPCA's statewide burning survey, it comes down to "habit and convenience," says MPCA solid waste supervisor Mark Rust.

For many people, he says, it's an unexamined family practice to burn garbage at the cabin, rural home, or farm. Some claim they don't know the law, though it's been on the books since the 1980s. A few are well aware of the law and determined not to follow it. Some rural residents are a long way from garbage and recycling drop-off sites. Some say they can't afford the waste hauling fees in their area.

Several MPCA staff members work to raise awareness about illegal burning and address the barriers to proper waste disposal. They've produced fliers, web pages, and other materials stressing the harms of burning. They created a costumed character named Bernie the Burn Barrel for events. They work with county health officials and public health boards. One MPCA initiative helped Chisago County implement a "burn barrel buy back" program. It invited residents to turn in their barrels, no questions asked, in return for a six-month, half-off discount on garbage hauling.

In Lincoln and Redwood counties in southwestern Minnesota, Fisher worked with local officials and waste administrators to establish waste and recycling drop-off sites. The cost for the disposal is spread via a modest tax or fee throughout a township or county.

"It makes it affordable," says Fisher. "We found in those counties that if you implement a strategy that works with local communities and townships to provide convenient, affordable garbage collection and recycling, folks will no longer burn and they will participate."

Sparking Changes. When DNR conservation officers and local law enforcement authorities write a ticket for illegal burning, it's typically a misdemeanor, with fines seldom topping $2,000. The MPCA focuses on investigating larger-scale violations and can issue civil penalties starting at $3,500. Spring and fall—when people tend to do cleaning, decluttering, and yard work—are the busiest periods.

Kuske takes a keen personal interest in trash burning. "It's a pet peeve of mine. I hate the smell of burning garbage," he says. "And it's incredible how much backyard burning goes on in this state."

For years, Kuske taught a class on illegal burning at the DNR's conservation officer training academy, urging recruits to take burning violations as seriously as those involving fish and game. He puts those lessons to use on his home turf, a central Minnesota county with many farms and rural residences as well as lake homes and cabins. "Morrison County has a real vast history of burning," he says.

On one Fourth of July weekend, Kuske came across a group of partiers ready to toss a match into a huge fire pit containing three mattresses and a living-room chair. He has discovered burn barrels being used right next to propane tanks.

As Kuske drives around peeking into burn barrels, he also knocks on doors and chats with property owners, amiably reminding them that burning garbage isn't OK and discussing other options for disposal. Most are receptive, but a few seem guarded and uneasy. One man, after Kuske prods him for information about his trash burner, answers with a staged Germanic accent, only half-jokingly, "I know noth-ink."

Brady works in the part of the state where the MPCA investigates more illegal burning than anywhere else: the south. Based in Rochester, Brady covers a 20-county area. Only two counties in his area have enacted a "no-burn" resolution to close a loophole allowing farmers to burn agriculture-related waste. The loophole, say Brady and his colleagues, creates confusion about burning laws and fuels an erroneous perception that farmers and their rural neighbors can burn just about anything. Inspectors once found a charred horse carcass in the rubble of a garbage fire. Brady describes investigating a property that had become a dump-and-burn site for debris from foreclosed homes.

Most of Brady's tips about illegal burning come in by phone. Many tipsters are reporting their neighbors and don't want to be identified. About half of the trash burners Brady investigates have valid burn permits to burn plant material or untreated wood, but they have violated permit terms by tossing garbage into the mix.

Unlike Kuske, Brady doesn't carry a badge or a sidearm, so he sometimes asks local law enforcers for backup when he senses that a confrontation with a burner might turn threatening. But most of the time, the young Marine veteran relies on his empathetic manner to get to the bottom of an investigation.

"When you start talking plastics and other kinds of toxic materials, most people understand it. And I'm pretty sure a majority of them know it's bad," says Brady. "Usually, by the end of the conversation, they're saying, 'We apologize, we didn't really understand the effects, we'll stop this now.'"