It's a pleasant October day in western Minnesota, perfect for a hunter to follow a brown-tailed dog that is following his nose that is following a rooster pheasant through bluestem. If I look at our immediate surroundings of native grasses and wildflowers, I can imagine I'm seeing prairie as Native Americans and early settlers once did. However, if I lift my eyes, I see a horizon fringed with drying cornstalks and last year's gray hay bales. In the distance, a combine cuts its way through a sea of soybeans.

Most habitat for pheasants, as well as native grassland species, occurs in the western and southern agricultural regions of the state. In most counties throughout the ring-necked pheasant's range, land ownership is private. In contrast, large federal, state, and county land holdings in the forested northeast provide plenty of wildlife habitat and public access for hunting. 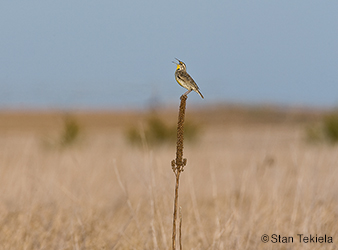 In recent years Grant and Dawn Breitkreutz of Redwood Falls have changed their farming operation to improve their economy. At the same time, they've noted a dramatic increase in wildlife. Grant sees pheasants flying around constantly when he's in the fields with his cattle. Deer are also common. Plentiful wildlife shows them how healthy their land has become.

The Breitkreutzes, who farm their own 280 acres as well as rented land, moved away from the more traditional corn and soybean rotation to a more diverse multiyear rotation of row crops, small grains, and cover crops. After they harvest commodity crops, they plant cover crops. Their cattle graze the cover crops and add manure to the fields. Because of this high-quality forage, their cattle put on more weight and have fewer veterinary bills, according to Grant Breitkreutz.

DNR area wildlife manager Jeff Zajac helped the Breitkreutzes extend their conservation grazing plan to include parts of the adjacent Cedar Rock Wildlife Management Area. Their cattle now get fresh forage and help improve these public lands for wildlife. The DNR calls this the working lands approach to grassland habitat management and conservation.

The Breitkreutzes aren't the only ones seeing more birds on their land. They frequently see people stopping along the road to watch birds on their grasslands.

This year marks the 100th anniversary of the first successful release of ring-necked pheasants (Phasianus colchicus) in Minnesota. The Department of Natural Resources introduced this species, native to China, to provide hunting opportunities. Those first birds found a landscape that looked very different from farmland today. Back then, farms had a greater variety of row crops and small grains. Fields were smaller with brushy fencerows. There was more livestock and, therefore, more pastures and hayfields.

In this diverse agricultural landscape, pheasants found seeds, grains, and insects to eat and wetlands with cattails for winter cover. During the first pheasant hunting season in 1924, hunters harvested 300 roosters. By 1931 they took over a million birds. A decade later the harvest peaked at 1.8 million roosters.

Today, grassland habitats, as well as wetlands, are getting harder and harder to find in western Minnesota. Native prairie remains on only 235,000 acres of the original 18 million acres. The federal Conservation Reserve Program, which compensates farmers for planting and maintaining grassland habitat, has dwindled. In 2007 Minnesota had more than 1.4 million acres enrolled, but CRP has only about 595,000 acres today. In 2016 many landowners who wanted to enroll in CRP were turned away due to an acreage cap on that program.

As I drove with my dog to our favorite wildlife management area this morning, we saw only two crops—corn and soybeans. Roostertails of dust followed tractors plowing under crop residue and waste grain, leaving the soil bare until spring. We passed a backhoe scooping eroded topsoil from a ditch and another piece of equipment installing drainage tiles to speed water off the land—a benefit to crops but a detriment to grasslands. We saw no livestock or pastures or brushy fencerows. No grass, no cattail-rimmed wetlands. Roadsides were mowed down to putting-green height. Not a friendly place for a pheasant—or any grassland bird—to nest, raise a brood, or survive winter.

On the recommendation of the hunting community, Gov. Mark Dayton hosted a pheasant summit in December 2014. Around 300 people met in Marshall to discuss the state of pheasants, habitat, and Minnesota's hunting heritage. From this meeting came the state's Pheasant Summit Action Plan. It aims to put more grass on the land, improve wildlife habitat, and boost water quality to boot.

The plan of action calls for enrolling more land in conservation programs and habitat easements, acquiring more state and federal public hunting lands from willing sellers, maintaining grassland buffers along waterways, improving roadside habitat, and continuing the Walk-In Access program for public hunting on private land. The plan also calls for more research on grassland wildlife and better communication about the importance of grasslands to Minnesotans.

Private Lands. Pheasants are farmland birds. In the farmland region, the large majority of land is in private ownership. In the state's nine southwestern counties, public wildlife lands cover an average of only 2 percent of the landscape. While wildlife agencies and conservation organizations are ready and willing to help improve habitat, the fate of pheasants and other grassland wildlife is in the hands of private landowners and the agricultural policies that dictate many of their decisions.

As the pheasant plan acknowledges, one of the best ways to get private grasslands on the landscape is through the state's Farm Bill Assistance program. Farm Bill biologists work out of county Soil and Water Conservation District and Natural Resources Conservation Service offices. In 2015 they worked with 17,847 landowners and developed 3,493 contracts for enrolling lands in habitat programs covering 68,293 acres.

In coming decades, grasslands are likely to remain a small percentage of the agricultural landscape, so the plan calls for increased management and a greater variety of management practices to make those acres as productive for wildlife as possible. Grassland management increases the diversity of native plants through prescribed fire, tree removal, invasive species control, and conservation grazing.

Complex Key. A key feature of the pheasant plan is developing complexes of grassland habitat intermixed with row crops and small grains. Research shows that many grassland birds do best on landscapes of at least nine square miles with at least 25 to 40 percent grassland. DNR staff, Farm Bill biologists, and other conservation professionals identified 9-square mile complexes in each county that already had some conservation lands. These are areas where they can build on previous conservation efforts. The plan's goal is to permanently protect through acquisition of public lands or conservation easements 40 percent of the land within each complex.

Larger areas stand a better chance of offering hilltop grasslands with short grass, lowlands with tall grass, wetlands with cattails, and brushy areas. They also allow a greater diversity of management. Landowners can burn part of an area, graze livestock on part, and cut hay on part. Agencies will work with landowners in these complexes to develop a working lands approach to conservation. Working lands integrate parts of the agricultural economy such as grazing, haying, and seed harvest into grassland management on both public and private lands. Integrating conservation lands with agriculture has a number of ecological and economic benefits. Hayfields with short grass make ideal places for some native species such as prairie chickens to do mating displays in early spring. They make good nesting habitat for species such as meadowlarks and upland sandpipers. Unburned, ungrazed grass makes ideal nesting cover for pheasants and mallards. Burned, lightly grazed grass provides good brood-rearing habitat. Cattail margins of wetlands and brushy lowlands offer winter cover.

Another key feature of the pheasant plan is its report card. Starting this past spring, the DNR will report annually on the status of each action item to Minnesotans. Poor grades do not indicate failure; they help conservationists identify areas that need more resources.

Grassland Links. Loss of grasslands has hurt native bird species, pollinators, and water quality, as well as pheasants. Between 2007 and 2014, populations of dickcissels declined by 72 percent, grasshopper sparrows by 50 percent, bobolinks by 45 percent, and meadowlarks by 22 percent. Pollinators, such as honeybees and native bees and butterflies, have declined alarmingly in recent years. Native wildflowers provide nectar and pollen for pollinators. According to a 2012 study from Cornell University, pollinators contribute as much as $29 billion to the national agricultural economy. Without pollinators, we would find less food at the grocery store, and food would be more expensive.

In September 2014 the Minnesota Pollution Control Agency released a report saying that no lakes and few streams in southwestern Minnesota met basic health standards for fishing or swimming. Grasslands help protect water quality by filtering snowmelt and rainwater. Research in Iowa has shown that strategically planting just 10 percent of a field in grass effectively filtered contaminants in runoff. Grassland eliminated 95 percent of sediment, 90 percent of phosphorus, and nearly 85 percent of nitrogen from the water leaving the field and going into ditches, rivers, and lakes.

More effective buffers were the number one item voted on by Pheasant Summit participants. In January 2015, a month after the pheasant summit, Gov. Dayton announced his initiative to require buffer strips of grass and other vegetation along ditches, streams, and other waterways to improve water quality.

Writing in 1945 about the plight of the pheasant's native cousin, the greater prairie chicken, Missouri wildlife biologist Charles Schwartz said: "The future of the prairie chicken in Missouri is in the hands of all people of the state, but it depends most of all upon those who use the soil." That was also true in Minnesota then, and it's still true today.