Joe Swintek picks up his slender, wooden bow where its long, graceful curve crests and forms a smooth handgrip for his left hand. He plucks a homemade tamarack arrow from his bison-hide quiver and nocks it on the taut striped bowstring. Holding the bow in front of his body with his left arm extended, Swintek inhales as he draws the string back with the three middle fingers of his right hand. With the string just touching the corner of his mouth, he gazes at the turkey-shaped target 15 yards away and pauses. He feels the slow, steady building of tension in his back and the tremendous power stored in the string. Perfectly still, he exhales and releases the arrow. 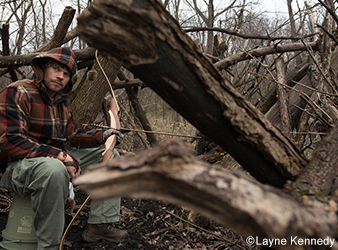 See more images of traditional bows and the archers who embrace the simplicity of their form.

The arrow makes a satisfying "thump" as it cleanly pierces the center of the mark. Only the fletching juts out from the bale. Swintek steps back five yards, grabs another arrow from his quiver, nocks it, and aims again.

Swintek and his brother Dan shoot scores of arrows like this every day for months to get ready for fall deer hunting. They hunt using traditional bows made with basic design principles dating back thousands of years.

Today the term bowhunting usually refers to hunting with a compound bow, which has mechanical features that improve performance and accuracy. Traditional bowhunting refers to shooting an arrow from essentially just a stick and a string. Every fall in Minnesota roughly 100,000 deer hunters use modern compound bows, but very few take to forests and fields using traditional bows.

In order to kill prey ethically with minimal suffering, traditional bowhunters must get within 20 yards. Most try to get even closer. Compare this with a compound bowhunter, whose effective range stretches to 40 yards and beyond, or with a firearms hunter, the most skilled of whom can make a kill from hundreds of yards away. Traditional bowhunters choose a tool that requires significant preparation, patience, and strategy to wield effectively.

Shooting a traditional bow affords the freedom to sidestep the relentless speed of modern life, slow down to the pace of nature, and delight in the simple, delicious sensation of releasing an arrow into flight.

New Recruits. Joe Swintek, whose wiry frame seems barely able to contain his abundant energy, started shooting a traditional bow in 2010 after he lost vision in one eye and became unable to properly sight his compound bow. He felt disappointed to give up the compound bow, which he had shot competitively for five years. But he discovered a new passion when his brother Dan brought him a traditional bow and told him, "You gotta try this!"

Traditional archery is often associated with an older generation, those who came of age before the advent of the compound bow in the late 1960s. The brothers, who are in their early 30s, perceive rising interest in traditional archery and hunting among their peers. They share their knowledge and enthusiasm for the sport on their YouTube channel, S3 Archery, which boasts over 1,900 subscribers and more than 200,000 views worldwide. Video segments cover topics such as draw techniques and considerations for purchasing a bow.

The Swinteks practice shooting an hour a day because they enjoy it and because achieving high proficiency with a traditional bow demands years of dedicated training. Like many traditional bowhunters, they enjoy stump shooting—roving through the forest and shooting tree stumps. Stump shooting enables bowhunters to gain valuable shooting experience in diverse, real-life terrain and develop the skill of instinctive aiming.

On family property near Park Rapids, they hunt turkey and deer while sitting in natural blinds made of brush and dead oak branches. The brothers wear plaid woolens, like hunters of an earlier era. (Bowhunters are not required to wear blaze orange in Minnesota.) "We want to feel like it's 1920," Joe admits with a grin. They employ no electronic aids, such as rangefinders or trail cameras, and try to stay downwind and stay still to avoid alerting wildlife of their presence.

The need to get closer to game intensifies sensory awareness. Joe recalls when a chickadee perched on his nocked arrow, a foot from his face. And he remembers a May morning when 20 turkeys circled his blind for over 90 minutes. He didn't have a good shot, so he sat utterly still and listened to the vigorous scraping of turkey wings on the ground and the "absolutely mesmerizing gobbling." He watched the antics of a strutting tom with a 10-inch beard and fully fanned tail feathers shimmering in the soft, early morning light. The tom was striving mightily to impress the hens and show his dominance over nearby toms.

Equal Playing Field. For Terry Banitt, the allure of traditional archery includes the deep satisfaction of getting into the woods as much as possible. "Our lives are getting so busy," says this soft-spoken, solidly built man. He describes traditional bowhunting as "the ultimate challenge" and believes that it "equals the playing field" with the quarry.

Introduced to the sport at the Rochester Archery Club over 25 years ago, he practiced daily for six months before hunting for the first time. Today Banitt owns and operates The Footed Shaft, a brick-and-mortar store dedicated exclusively to traditional archery. He continues to shoot 50 arrows a day, five days a week, year-round on his six acres near Whitewater Wildlife Management Area. "I love watching an arrow fly," he says.

Banitt spends hundreds of hours every year scouting and hunting deer. He dons full camouflage to watch animals interact from a front-row position. He recalls sitting in a river valley at sunrise when he saw a rutting buck with steam coming out of his mouth charging after a doe. He chuckles as he recalls watching a weasel climb into a hole in an oak. He then saw a "couple mice come bailing out," followed by the weasel, which promptly captured and devoured the mice. Banitt says he felt lucky to observe a master hunter at work.

Three years ago Banitt's wife, Barb, started shooting traditional bow. "I love shooting," she says. "It's cheaper than a psychiatrist." She also likes observing squirrels and raccoons while sitting in her tree stand. She is pleased about what she sees as a revival of the tradition and credits The Hunger Games books and movies with their archer heroine for inspiring young women to buy their own bows.

Cultural Renewal. Dawi Huhá Máza, bow maker, hunter, and Dakota studies teacher at Augsburg Fairview Academy in Minneapolis, became interested in the traditional archery of the Dakota Indian people in 2009. But at first, he says, "I couldn't even find resources on my own people."

Dawi says he felt "a deep, burning desire to hold in my hands the shape and style of a bow that my ancestors held." Searching on the Minnesota Historical Society website, he found photographs showing traditional Dakota bows carved from a single piece of wood. Later, at the Minnesota History Center 2012 exhibit on the U.S.–Dakota War of 1862, he met the museum's collections manager and had the opportunity to examine Dakota bows seized by U.S. soldiers as battlefield goods. He took note of their unique traits, such as the length of the bow and the shape of the tips.

Dawi began making traditional Dakota bows. He uses elm due to its strong, interlocking grains and its traditional use among Dakota people. He teaches bow making in private lessons and at youth camps. Bow making and shooting have brought him peace in times of personal turmoil, he says. From Dawi's perspective, bows are wakan—"incomprehensibly mysterious and powerful."

Gaining Meat. For Chad Holm, shooting and making bows exemplifies values of integrity, hard work, and ethical participation in "the age-old tradition of gaining meat." He strives to uphold and pass on this hunting ethos to his teenage son, also a traditional bowhunter.

Holm, a physical education teacher in Brainerd, started making his own bows in 2000 and began producing them for others in 2006. Holm-Made Traditional Bows now turns out 65 bows a year.

Holm selects exotic woods for their vibrant colors. He shapes and grinds the bow pieces in his workshop and hand sands each limb to silky perfection.

Building community around traditional archery is important to Holm. He often attends traditional shoots—gatherings where archers swap stories, buy and sell equipment, and fling arrows at life-size, three-dimensional, animal-shaped targets scattered throughout woods and fields. He enjoys playing shooting games with his friends and spending long hours in the woods during the three-month archery deer season.

Holm believes the limitations of traditional bowhunting intensify the experience. Many times he has passed up a shot on a deer or a turkey because it was outside his 15-yard range."The richness of the process and heritage," he says, matter more than bagging quarry. "Hunting is one sport where we don't have to keep score."

Shooting a traditional bow hearkens back to a slower time and a simpler world, drawing one into awareness of the moment and the natural wonder all around.