Name. The Bohemian waxwing is a winter visitor from the far North. Bohemian refers to the birds' wide-ranging nature as flocks search for fruit in winter. The name derives from a term for the nomadic Roma people. The term waxwing comes from the red-tipped wing feathers of both the Bohemian waxwing and the cedar waxwing, a year-round resident of Minnesota. 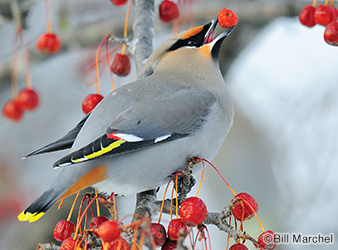 Appearance. The Bohemian waxwing's rusty-red undertail is a key distinguishing feature. This rust color also tinges its forehead and cheeks. Its chest, back, and much of its belly are brownish gray. Like the cedar waxwing, the Bohemian sports a black, wedge-shaped mask and chin. Both species have tails tipped in bright yellow. The wings of the Bohemian show white barring and yellow edging.

Range. Bohemian waxwings are circumpolar in distribution. In North America they nest from interior Alaska, east to the western shore of Hudson Bay, and south into the Rockies of the United States. Come winter, large flocks range across the northern United States, including the northern two-thirds of Minnesota. Some flocks may arrive in December, but numbers peak in February. Flocks may contain several hundred birds, including a few hardy cedar waxwings.

Feeding behavior. Though they eat insects in summer, Bohemian waxwings feed mostly on sugary fruits. Popular choices are tiny apples from flowering crab trees, plums, cherries, and berries of mountain ash. Once a fruit tree is discovered, they descend in waves from perches in tall trees nearby. They can strip a tree of fruit within hours. Because they swallow their food whole, they prefer smaller, softer fruits. If fruits have not yet softened by freeze and thaw cycles, they will quickly abandon the tree, but they may return in a few weeks to test the fruit again. Bohemian waxwings have large livers that convert fruit sugars to energy and metabolize the alcohol created by freeze fermentation. These gregarious birds call constantly. Calling may help keep flocks together as they roam in search of food.

Nesting. Bohemians nest in coniferous forests, often near water. Many may nest near each other to take advantage of the short period when fruit foods are available. The Bohemian waxwing is one of the few passerine species that does not hold a nesting territory and lacks a true song, which is a means of declaring a territory.

Status. The International Union for Conservation of Nature estimates a global population of Bohemian waxwings at more than 3 million birds and lists it as a species of least concern. The abundance of Bohemian waxwings in Minnesota depends on the severity of the winter and the availability of food farther north.