The sad, soft cooing of the mourning dove is often the first sound my dog and I hear when we step outside on summer morning walks. Many evenings, doves are the last birds we hear through the open bedroom window. Mourning doves bookend warm days.

Mourning doves are one of the most easily recognizable birds. Many people know their sleek gray shape, long neck, streamlined body, and even longer pointed tail in flight or resting on utility lines. People also know their mournful call and the whistling sound made by their wings when they take flight. Mourning doves occupy almost every habitat in North America except the oldest forests, from southern Canada to the Caribbean Islands and Central America, and from the Pacific to the Atlantic oceans. They can be found almost anywhere in Minnesota. 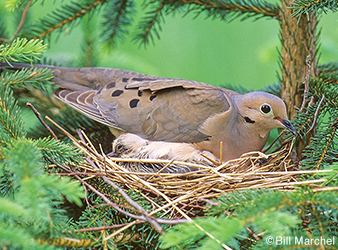 A mourning dove's life begins as an egg in what can only loosely be described as a nest. It looks more like a few randomly placed sticks balanced on a tree branch with a pair of eggs delicately balanced in the middle. The eggs, unlike most eggs laid in open nests, are bright white. Both parents incubate the eggs for about 14 days. Although many young birds are somewhat odd-looking for the first week after hatching, a young mourning dove truly has a face that only a mother could love.

Most young birds need lots of protein to grow fast in these first few weeks, and their parents bring them a diet that is almost entirely insects. But mourning doves are granivores—seed eaters—even at a young age. Doves primarily forage on the ground for the seeds of annual plants. To get the protein the young need, both parents shed the lining of a part of their digestive tract called the crop and regurgitate this to feed the nestlings. This whitish substance is referred to as crop milk.

The young birds grow fast enough on this diet that they leave the nest about 11 to 15 days after they hatch and are independent of their parents less than a week later. Like most birds, doves have relatively short lives, few living to see their first or second birthdays.

Almost immediately, the adults will begin building another nest. Some mourning doves can have as many as five clutches of eggs per summer. Since Minnesota is at the northern end of their range and has shorter summers, our birds probably have fewer clutches. Dove pairs are monogamous during the nesting season, and some will retain their pair bond for years.

Doves are migratory, but more and more, a few birds stay in Minnesota year-round. In mild winters they are able to find enough to eat at backyard feeders.

Doves play an important cultural role around the world. In the Bible, a dove brought the olive branch back to Noah. Today we contrast the hawks of war with the doves of peace. Doves, pigeons, and their relatives have adapted to urban and suburban habitats worldwide better than any other group of birds.

In another role that is sometimes overlooked, mourning doves are an important member of Minnesota's wildlife community and a renewed part of the state's hunting tradition.

Mourning doves are the only North American bird that is classified as both songbird and gamebird. Mourning doves generally offer the first hunting opportunities of the fall, with their season opening on September 1 in most states. In 2015, hunters harvested 13,157,300 mourning doves nationwide and 96,550 doves in Minnesota.

Mourning dove hunting can be controversial. Many people see these birds as songbirds, better spotted through binoculars than over the barrel of a shotgun. Today, 10 states including Michigan, New York, New Jersey, and the New England states classify doves as songbirds and do not have a hunting season.

A close relative of the mourning dove, the passenger pigeon, was once the most abundant bird species on earth but was extinguished by 1914 because of hunting and habitat loss. While it's hard to compare doves and pigeons in this context, the passenger pigeon's fate shows us that we can't take any wildlife species for granted no matter how abundant they are now.

Birdwatchers also help keep track of doves. In the 2017 national Great Backyard Bird Counts, mourning doves were the third most reported species. According to the USGS Breeding Bird Survey, mourning doves have been the seventh most abundant species in Minnesota over the past decade. In 2015, there were an estimated 266 million mourning doves nationwide.

One potential emerging threat to mourning doves is the rapid expansion of Eurasian collared-doves across Minnesota. Although no research has shown that this invasive species is harming the native dove population, wildlife managers are keeping an eye on it.

Banding is one of the most familiar types of wildlife monitoring. Scientists have been banding birds in this country for more than a hundred years. Bird banding helps us learn about flyways and other migratory routes as well as the life spans of birds. Minnesota started a mourning dove banding program in 2007. Annual dove banding starts on July 1 and goes until August 20, 10 days before the hunting season opens. In 2015, Minnesotans banded 388 mourning doves. Banders include volunteers and staff from the U.S. Fish and Wildlife Service and the DNR, led by bird banding coordinator Bruce Davis. As the former dove banding coordinator, I have participated many times.

Trapping and researching wildlife populations often involves extended trips to the wilderness. Not so with doves. Banders spend the last few days of June looking in exotic locales such as gravel parking lots, grain elevators, and their own backyards for concentrations of doves. Banders place birdseed at promising sites to make them even more attractive. Once doves are predictably coming into the bait piles in early July, the traps are set out.

Once the doves are in the trap, I open the door on top and quickly but gently place a hand on the dove's back, with a finger along each side of the neck and the remaining fingers and thumb wrapped around the bird, gently holding the wings to the body. With the head and wings immobilized the bird can't struggle or hurt itself.

The first job is to put a numbered aluminum leg band on the bird and record that number on a datasheet. Then we determine the age and gender of the bird. In most birds, we can tell hatch-year or juvenile birds from adults.

Hatch-year birds have a light buff tip on their wing covert feathers, the shorter feathers on the front of the wing that cover the bases of the longer flight feathers. Once we determine age, we assign gender. Adult males have bluish iridescence on the neck, pinkish iridescence on the chest. The females are drabber. The distinction can be hard to make, even for an experienced bander. We record the gender of hard-to-identify and juvenile birds as unknown.

The DNR sends banding data to the USGS Wildlife Research Center in Patuxent, Maryland. Any hunter who shoots a banded bird can submit the number to the lab and find out when and where the bird was banded. The record lifespan for a banded mourning dove is 31 years.

As climate changes and land-use patterns shift as a result, band returns will be one of the best tools we have for studying how these changes are affecting mourning doves.

A Bird in the Hand

One of the joys of hunting is the possession. But for many of us there is also a sadness. A bird falls from the sky, my dog delivers it to my hand, and for a minute I hold the bird and admire the tapestry of color on each feather and the mosaic of feathers across the body. But the body is limp, the head flops against the chest, and those wings will never catch the wind again.

With banding, I momentarily possess the bird. I can hold it, study and admire the bird up close and in detail. But instead of placing a limp body in the game pouch, I open my hand and the bird wings off into the sky. That combination of selfish possession and selfless release may be a part of what conservation is all about.

As a warm summer day descends into cool evening, a geriatric retriever and I sit in the yard, listening to the wind hiss through the trees and rattle through the corn, observing swallows and nighthawks in the sky above chasing invisible insects, and waiting for the evening's first fireflies. We hope some doves, out for a quick bedtime snack, will walk into that trap in the driveway.