My father loved the natural world, especially when it came to finding good things to eat. In a family of six living on his railroader's salary, wild harvests were welcome additions to the family table. Beyond fish caught and game shot, fungi, plants, nuts, and fruits provided more reasons to get outdoors in every season.

Spring was for morels in the woods, followed by wild asparagus along roadsides, fencerows, and field edges. Early July was for "black caps," as Dad called black raspberries. Fall was for walnuts and hickory nuts.

But my favorite gathering season was wild plum time. 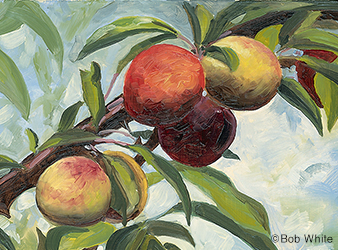 With some scouting and planning, you can find and harvest your own wild plum bounty. Wild fruits may be gathered in Minnesota state forests, state parks, wildlife management areas, and on some other public lands. Check with the land manager to make sure it's allowed before you gather.

Look for wild plum thickets in spring, when the profuse white mounds of blossoms form before leaf-out and give away locations. Each flower features five elegant white petals with a clump of delicate, yellow-tipped stamens bursting from the middle. Some wild plum blossoms feature red sepals, which can give flowers a pink tinge close up. Flowers clump at the ends of branches.

It's easy to spot fruiting trees at plum time, too, which occurs from late August to mid-September in Minnesota. Dress in long-sleeved pants and shirts to protect against thorns, poison ivy, and any wild parsnip you may encounter. A bucket or mesh sack holds your harvest as you work from tree to tree and thicket to thicket.

It's easy to glean the edge of a wild plum patch. But much plum bounty comes when you ease into a thicket. Either way, the perfect plums are the ones still on the branch but that fall off at a gentle touch. Ripe plums already on the ground can be good if they are very freshly fallen, before they start decaying and getting mushy.

Back home, wash the fruits and go to work processing them into wild plum creations within a day or two. Don't refrigerate wild plums, as the chill will make them mealy. 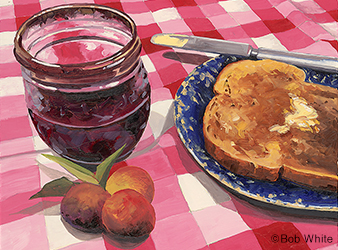 Bring plums and water to boil in a large pot. Reduce heat, stir in sugar, increase heat, and bring mixture back to a full boil. Add lemon juice to prevent foaming. Immediately mix in pectin, stirring for 1 minute. Remove pot from heat and let mixture cool. Sterilize jars in boiling water. Pack jars with plum mixture to within ¼ inch of top. Top jars with lids and rings. Fill a pot half full of water and bring to a boil. Place jars in boiling water and boil for 10 minutes. Remove jars with tongs; cool on a towel on the countertop. Notes: Follow standard safe canning procedures. Increase sugar for sweeter jam; decrease sugar for tarter flavor. Try flavoring your jam with cinnamon, nutmeg, ginger, or orange peel.

Wild Plum Sauce
Bring 2 cups of water and 2 cups of sugar to a boil, then keep stirring for 5 minutes. Add a pound of pitted skin-on wild plums and simmer for 10 to 12 minutes. Cool and freeze in plastic containers. Expand recipe as needed for bigger batches.

Dried Plums
Take the pits out or leave them in and dry in a food dehydrator. The natural sugars will intensify. Ya, it's a prune!

Part of the attraction was the weather. In Minnesota, wild plums ripen during that bridge time when the days bask in summerlike warmth but the nights cool off with a hint of autumn, spurring the fruits to set their sugars and color up to reds, yellows, and purple-blues. The sun takes on the orange glow of a new autumn, but the air feels like old summer—thick and moist and full.

Sometimes we'd locate a thicket on a fall deer hunt or a winter rabbit hunt, noting its location for next plum season. Scouting locations was easier in spring. A plum thicket's mound of white blossoms beckoned us for a return visit in four months' time when the foliage was green and jungle-like, the plums plump and ripe.

The other part of the attraction was the bounty itself. I still love that burst of sweet-tart flavor that fills my mouth when I bite into a fresh wild plum that has plopped off the branch at my touch. In a good plum year, we'd bring our harvest home by the bucketful and go to work making jam with Mom.

The first step was dumping the plums into cool water in the kitchen sink to wash and sort. We'd throw out the mushy specimens and set the hardest ones aside to ripen.

Mom would simmer the prime plums in a syrup boiled from water and cane sugar. She'd include a few hard plums to add extra tartness. The resulting mash was then strained of pits and skins, and the remaining extrusion of plum meats and juice served as the basis for a year's supply of wild plum jam.

I have since expanded my wild plum repertoire to plum sauce, dried plums, and plum wine. And I have grown in my appreciation of this native plant's importance to wildlife, to the American Indians who used it for food and medicine, and to the early Minnesota pioneers who found wild plums abundant on the landscape.

Minnesota's primary wild plum, the American plum (Prunus Americana), exists as a small tree or large shrub. In Minnesota, wild plum trees can grow up to 24 feet tall, with branches sporting spines two to three inches long. Like their relatives cherries, peaches, and apricots, a plum is a drupe, a fleshy fruit surrounding a single hard stone, pit, or seed.

Before European settlement, American plum was found across the southern and western half of Minnesota—our prairies and savannas. It needs sun and prefers moist soil, and its seeds are often spread by plum-eating wildlife. Once a few seedlings establish themselves, aggressive suckering expands the colony. Thickets achieve a mounded look, with the original plum trees tallest in the middle, and new saplings and seedlings progressively shorter toward the clump's edges. Wild plum trees also grow individually.

In spring, fragrant white blossoms surge forth before the landscape fully greens up and leafs out. Later, the sharply toothed leaves are smooth and shiny on top with a papery or hairy texture below. In fall, just after fruiting, wild plum leaves splash brilliant reds, oranges, and yellows on the landscape.

Minnesota is also home to the closely related Canada or red plum (Prunus nigra), which grows in the northern and eastern part of the state. This small tree prefers medium shade and is often associated with edges and transition zones related to birch, aspen, ash, maple, hawthorn, elderberry and sumac. Red plums taste like American plums.

A dense framework of thorny branches, growing low to the ground, offers safety and cover for cotton-tailed rabbits and white-tailed deer. Sharp-tailed grouse and prairie chickens rely on plum thickets for escape cover and winter roosts, as do the ring-necked pheasants that were introduced after much of the prairie was cultivated. Ruffed grouse love the dense edge cover a wild plum thicket offers. Shrub-nesting songbirds such as American goldfinches, chipping sparrows, and northern cardinals use small plum trees.

In season, wild plums are eaten by wild turkeys, raccoons, opossums, skunks, black bears, foxes, coyotes, squirrels, cottontails, and whitetails. The plums have a carbohydrate content of 20 percent, among the highest of any fruit; this really puts fat on any creature lucky enough to find a productive thicket.

The Plum in History

Minnesota's native Dakota people used wild plums as a food source during the fruiting season. In years of abundance, the Dakota dried plums with or without pits for future eating.

Wild plum trees also provided medicine for American Indians. Bark from American plum roots was scraped off and boiled to make a salve for abrasions and cuts. Crushed fruit was mixed with salt to soothe and treat mouth sores. Ground bark and rootlets served as a diarrhea remedy.

It's no accident that wild plum parts offer tonic and healing value. The plums themselves serve as both an astringent and a sedative. The bark and roots contain phloretin, an antibacterial agent.

When Minnesota's early pioneers arrived, they found the wild plum abundant. In an 1855 letter about the Cannon River valley to his father-in-law, John Wesley North wrote: "The whole valley of this river is beautiful and very fertile. The … wild plum grow there in great abundance, and furnish fruit to the settlers."

Ludvig Larson broke ground in northwestern Minnesota, but he found time to turn wild plums into a cash crop. In Pioneers of the Valley: Bicentennial History of Polk County, Minnesota, his son notes: "When the wild plums were in season, there would be many bushels in the buggy to be sold to Arneson Mercantile Store of East Grand Forks."

Not every interaction with wild plums was under happy circumstances.

During the U.S.–Dakota War of 1862, 11-year-old Merton Eastlick's mother sent him escaping across the prairie of what is now Murray County, in charge of his infant brother. During the journey, Merton found and ate wild plums, according to one account.

Farther north, my friend Charlie Ek's Finnish grandparents homesteaded near Embarrass, where danger of a different sort lurked: "We picked wild plums on the family farm," he told me, "while Grandpa kept a watch on the bears that frequented the same patch."

When summer grows old and the lush landscape begins to harken of autumn, wild plums turn red and blue and purple where fragrant white blossoms welcomed springtime so long ago. It is now that I return to carefully marked locations to harvest the colorful bounty hanging heavily from the branches, and then turn the wild fruits into sweet-tart creations that will grace my table through the winter.

Wild plum season holds a special place in my heart. When working in sultry, thorny thickets and then carrying out a bucket full of plums, I honor the American Indians and early pioneers who harvested a similar crop so long ago, as well as my own heritage.