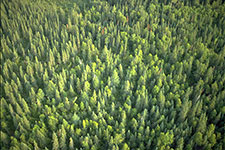 Duluth Pack approached the Future Forest Fund with an idea: to donate one tree for every Duluth Pack-branded item it sold throughout Arbor Month. The company promoted its "Buy A Pack, We Give Back" idea on social media, in newspapers, and on the radio—with great success. It ended up selling enough items to plant 2,400 red maples in Cromwell, which is near Duluth. The area needed to be reforested, after emerald ash borer forced the harvesting of all black ash. The promotion was a win-win for the company, its customers, and Minnesotans: Duluth Pack engaged its customers in the importance of planting trees during Arbor Month, and the people of Minnesota reaped the benefit.

"There is truthfully nothing more rewarding than giving back and making a difference,' says Tom Sega, the president of Duluth Pack. "A priority of ours at Duluth Pack is encouraging our customers to get out and connect; with the outdoors more than ever. The Future Forest Fund has helped us engage with the community and individuals and fulfill our mission of maintaining Minnesota's wilderness areas so that everyone has a place to go adventure."

Now in its third year, Duluth Pack's Arbor Month efforts have supported the planting of more than 10,000 seedlings.