In estuaries, water flow and the natural movement of sediments combine to provide unique, productive, shallow water habitats. Over the past 100 years, a legacy of historic commercial uses of the estuary disrupted and altered these natural habitats as shorelines and near shore areas were dredged and developed, and chemical contamination impacted the waters. 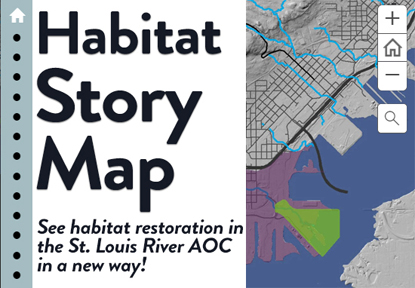 People recognized that legacy sediment contaminants needed to be remediated and damaged habitat needed to be restored. The St. Louis River Estuary was designated an international "Area of Concern" and a partnership of federal, state and tribal agencies is working together to restore the estuary.

As the St. Louis River estuary was developed into a shipping harbor, habitat needed to support Common Terns was lost. Ironically, material dredged to form the shipping channels was stockpiled to create Interstate Island, which became one of only two remaining Common Tern nesting sites in Lake Superior and is a designated state Wildlife Management Area. In recent years, the water level in Lake Superior has been rising causing inundation of the island, loss of nesting area, and more predation of terns by gulls. Common Terns are listed as Threatened in Minnesota and Endangered in Wisconsin. Restoring habitat for this important species is being done under the St. Louis River Area of Concern program to address legacy impacts to wildlife populations.

In 2015, MNDNR completed Phase 1 restoration to protect the Common Tern nesting area from rising waters. Scroll down to the “Completed Projects” portion of this website for more information on Phase 1. MNDNR is working in partnership with the Minnesota Land Trust, Wisconsin DNR, the University of Minnesota Duluth’s Natural Resources Research Institute, U.S. Fish and Wildlife Service, and the U.S. Army Corps of Engineers to further restore, protect, and enhance this critical habitat. Phase 2 kicked off in spring of 2020, and will be completed in fall 2020. During Phase 2, we will increase the island’s elevation to eliminate flooding and enhance the Common Tern nesting area with rock, sand, cobbles, driftwood, and new fencing. Clean harbor dredge materials will be placed to expand the island’s footprint, creating additional habitat for gulls and migratory shore birds. Lastly, we will create a long-term management plan to maintain the island as suitable Common Tern nesting habitat into the future. Watch a short video about the planned work.

This $1,600,000 project is being completed with support from the following:

At nearby Kingsbury Bay, excessive sediment deposits have reduced wetland quality by significantly shallowing the bay and supporting non-native cattails. Removing excess sediment will help establish a variety of native wetland plants, create more open-water habitat, and increase recreational opportunities. Clean sediment removed from Kingsbury Bay will be used at Grassy Point to restore areas where wood waste was removed. Kingsbury Bay was selected for restoration through the Natural Resource Damage Assessment (NRDA) settlement process for the St. Louis River Interlake/Duluth Tar Superfund site. Future work upstream in the Kingsbury Creek watershed aimed at reducing excessive sediment loads into the creek and bay has been selected for funding through NRDA.

Why is this project being done?

The DNR will restore degraded wetlands at Grassy Point and Kingsbury Bay. At Grassy Point, sawmill waste deposited in the late 1800s and early 1900s is being removed. At Kingsbury Bay, excessive sediments supporting non-native vegetation will be excavated. At both sites, the DNR will create shallow sheltered bays and restore valuable wetland habitat. This habitat restoration project is one of many projects taking place in the St. Louis River estuary that will help get it delisted as an Area of Concern.

How long will this project last?

The project began in June 2019 and is currently scheduled for completion in December 2020.

Where is the funding coming from?

What kinds of wildlife will benefit from this restored habitat?

How will the construction schedule impact my neighborhood?

Barges will be used to excavate and transport most of the materials involved in this project. Large dump trucks will be required to bring in sand/gravel, haul away non-native vegetation, and transport some sediment from Kingsbury Bay for restoration use at Grassy Point. Hauling will be short-term, and routes may impact the Irving neighborhood, Indian Point Campground, and Grand Avenue. Frequent construction updates will include the most current haul routes.

What recreational trails and facilities will be impacted by the construction?

How can I get regular updates about this project?

Check this website regularly and sign up for St. Louis River Area of Concern updates via GovDelivery. (include link here)

MNDNR is currently working to restore Kingsbury Bay, an 80-acre shallow bay in the St. Louis River estuary that has received excessive sediment inputs from Kingsbury Creek. Decades of sediment accumulation filled the bay’s open water wetlands, converting them to shallow stands of non-native cattail. MNDNR began restoring Kingsbury Bay in 2019 by dredging sediments to create open water and wetlands supporting native plants. Restoration of Kingsbury Bay is an element of the Natural Resource Damage Assessment (NRDA) settlement for the St. Louis River Interlake/Duluth Tar Superfund Site. In order to increase the resiliency of this restoration work, the Trustees for the NRDA process consider it important to also address the underlying causes of excessive sedimentation in the Kingsbury Creek watershed.

Working on behalf of the Trustees, MNDNR began a process to assess the Kingsbury Creek watershed and select one or more projects to reduce future sediment loading the creek, while also considering the ecological functions and biological habitat of the stream system. In 2019, Barr Engineering Co. completed a feasibility study of the Kingsbury Creek watershed. They identified stream reaches and watershed areas that are contributing excessive sediment, and recommended conceptual plans for restoration or stabilization of these areas. In 2020, the NRDA Trustees worked with MNDNR and a team of local resource managers to review the feasibility study and select one or more projects to implement. In 2020, Barr Engineering Co. will produce final plans and specifications for the selected projects. Construction of the selected projects is anticipated to begin in 2021 and will be funded through the NRDA settlement and the MN Outdoor Heritage Fund.

Chambers Grove Park is located on the upper end of the estuary near Duluth’s Fond du Lac neighborhood. This is a critical spawning area for Lake Superior’s migratory fish species including lake sturgeon, walleye, and longnose sucker, as well as resident species such as smallmouth bass and white sucker. The city park was built adjacent to the river in the 1960s and the shoreline was stabilized with a wall of steel sheet piling and a wooden boardwalk. Prior to restoration, the area lacked spawning habitat for lake sturgeon and the wall along the shoreline eliminated the shallow, slow-moving water important as fish rearing habitat.

Restoration included building instream rock riffles to establish spawning habitat for fish and creating a natural shoreline. The project also improved recreational access for fishing, canoeing, kayaking, and established ADA-compliant fishing platforms in several locations along shoreline. The DNR completed the project in 2015 with funding from the National Oceanic and Atmospheric Administration through the Great Lakes Restoration Initiative and by Minnesota’s Outdoor Heritage Fund. Following habitat restoration, the City of Duluth has invested significantly in the park, adding amenities such as restrooms and a playground, a pavilion, and picnic areas. Parking and wayfinding signs were also upgraded.

Construction of Phase I restoration at Interstate Island in 2015.Photo credit: The Minnesota DNR via Northern Images

Formed in 1934 when the St. Louis River navigation channel was dredged, the Interstate Island Wildlife Management Area rests on the Minnesota-Wisconsin border and is co-managed by both states. The island is federally listed as critical habitat for piping plover. It is also one of only two nest sites in the Lake Superior watershed for common terns, a species listed as endangered in Wisconsin and threatened in Minnesota. In 2015, the DNR rebuilt the height of the island to restore the sandy, wind-swept habitat needed by these uncommon birds. Fencing and string grids were improved to protect terns from predators. The DNR wildlife managers continue to monitor the island for tern reproduction rates and signs of attempted nesting by plovers. The project prevented the loss of crucial nesting habitat during a time of extremely high water levels in the St. Louis River Estuary and Lake Superior; it was funded by the US Fish and Wildlife Service and Minnesota’s Outdoor Heritage Fund.

The DNR and the Minnesota Land Trust have secured additional funding to implement Phase II restoration. They will completely repair the island from damage due to continued high water and ensure its long-term viability as a key nesting site for colonial waterbirds. Designs are underway and construction is estimated to be completed by November of 2020. The project will be funded by the Minnesota Outdoor Heritage Fund, NOAA, USFWS, and EPA.

Pre and post-construction of the main stem (left) and tributaries (right).

Knowlton Creek is a designated trout stream and tributary to the St. Louis River. Developments within its watershed and a major flash flood in 2012 resulted in severe damage to the stream channel and a large sediment deposit near Tallas Island. Although Knowlton Creek historically supported trout and water temperatures were suitable, trout had been missing from the stream.

The DNR worked with the Spirit Mountain Recreation Area (SMRA) and City of Cloquet to re-design water systems and reduce erosion impacts to the creek and its tributaries. The DNR also repaired 6,500 feet of degraded stream channel, restored 8 acres of wetlands, reduced sediment inputs to the St. Louis River Estuary, and re-established a naturally reproducing brook trout population by creating suitable habitat and removing barriers to fish migration. Completed in 2017, this project was designed through a partnership between the Clean Water Legacy fund and the US Army Corps of Engineers.

Funding for construction was provided by US Environmental Protection Agency, Minnesota’s Outdoor Heritage fund and the National Fish and Wildlife Foundation.

Radio Tower Bay was the site of two sawmills in the late 1800s. A railroad line once crossed the river there on wooden pilings. Concrete foundations from abandoned radio towers are found in the bay. The sawmills dumped waste slab wood and sawdust directly into the water, greatly reducing the quality of underwater habitat for fish.  The waste wood made the bay nearly inaccessible for recreation.

Phase I of the project removed the wooden pilings that once supported the railroad line. Phase II removed 115,000 cubic yards of the century-old wood waste and restored 30 acres of sheltered bay habitat. Sheltered bay habitat is considered the most biologically productive habitat in the estuary. The bay was restored to a depth of approximately five feet, allowing for aquatic plant regrowth, improved aquatic habitat, and better recreational boating access. The project was funded by National Oceanic and Atmospheric Administration through the Great Lakes Restoration Initiative and Minnesota’s Outdoor Heritage Fund.

St. Louis River Estuary: the Stories and the Science