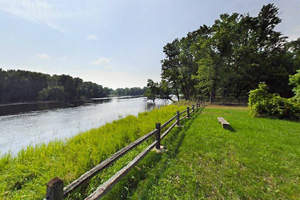 Welcome to Crow Wing State Park. From camping to hiking to historic sites, there is so much to explore! This area was once the bustling riverfront of Crow Wing in the mid-1800s. Imagine trade goods being transferred and distant news arriving at this frontier settlement. Today it is quiet, a place of solitude as one looks across the Mississippi River to Crow Wing Island. 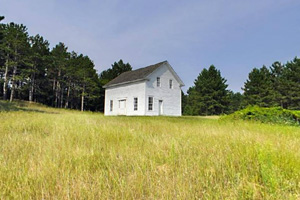 Built in 1849, by fur trader Clement Beaulieu, this is the only remaining building from the original townsite of more than 500 residents in the mid-1800s. The house is the only structure of that era still standing north of St. Anthony Falls. Many other buildings from the old townsite were dismantled and carted away as the Northern Pacific Railway located ten miles upriver at a crossing later named “Brainerd.” 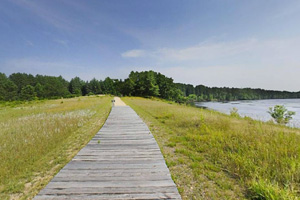 A boardwalk once ran in front of several stores in the original town; this replica of the original boardwalk features several interpretive signs explaining the history of “Old Crow Wing.” Stroll along the boardwalk and experience a natural vista where the Crow Wing River flows into the mighty Mississippi. 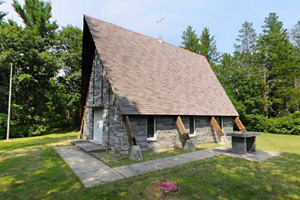 Missionaries came to Crow Wing and mission churches were built.  In August 1852, Father Pierz established the Catholic mission. This chapel sits at the site of the first church that Father Pierz built in 1867. The chapel and grounds are still owned by the St. Cloud Diocese. 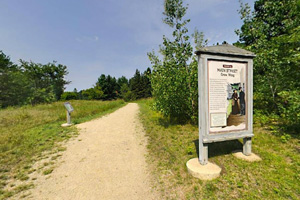 Welcome to the Main Street Crow Wing Self-guided Trail. Signs along the trail allow you to learn about Crow Wing State Park’s fascinating history, including fur-trading posts of the 1820s, the Red River Oxcart Trail, and the village known as “Old Crow Wing.” In the 1860s, this bustling center of trade and travel boasted a truly “international” population of over 500 people. When the railroad bypassed the community in favor of a river crossing where Brainerd is today, the village of Crow Wing faded into history. This important site is listed on the National Register of Historic Places. 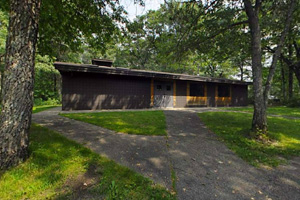 The park picnic shelter is a hub for family reunions, small wedding receptions, and graduation celebrations. It is well-lighted and offers indoor restrooms, electric outlets, and seating for about 60. Contact the park office to reserve this space. Near the picnic shelter and adjacent to the Red River Trail is the Oxcart Kiosk, which provides a historical depiction of life along the Woods Trail more than a century ago. 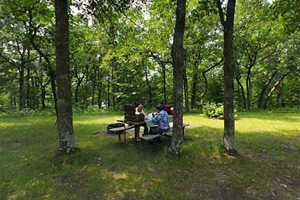 Start your visit to the park with a picnic at one of the shaded tables provided in this area. You’ll find ample parking for groups of friends or family reunions. The trailhead to historic sites and other park trails begins here. A short walk will lead you to the banks of the Mississippi River. 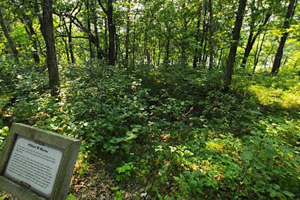 This cellar depression marks the home of William Whipple Warren, author of the book, “History of the Ojibway People.”  Originally published in 1885, the book is still in print today. 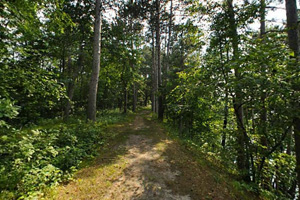 According to 19th century historian, William Warren, this was the scene of a major battle between the Dakota and Ojibwe in 1768. From this vantage point, it was reported that the Ojibwe were successful in their attack on the Dakota warriors who had earlier taken captives from Big Sandy Lake. The victory established Ojibwe control of the area. A nearby interpretive panel describes the location’s significance. 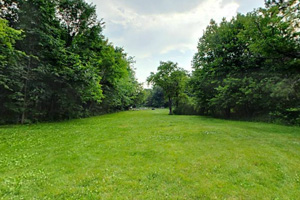 Located next to the Mississippi River, this rustic site is great for family get-togethers or an outing with good friends. Perfect for groups of up to 75, there is space for more than a dozen tents on the lawn or six to eight campers or RVs in the parking area. Bring your own camp games of soccer, bocce ball, or badminton. 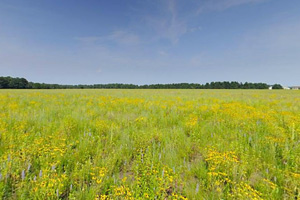 This view of flowers and grasses is just a glimpse of the landscape that existed on this sandplain prior to European settlement. Now it is being restored with several native species from this region, including: brown-eyed Susan, giant blue hyssop, blazing star, little bluestem, and Indian grass. 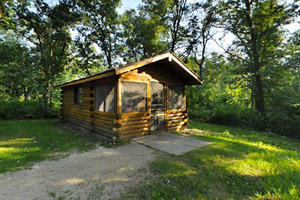 Enjoy a night of camping in a snug camper cabin. You and your family or friends will experience an outdoor adventure without having to setup a tent. The cabin sleeps up to five people. Mattresses are provided, but bring your own bedding. Cook your meals over the outdoor fire grill. 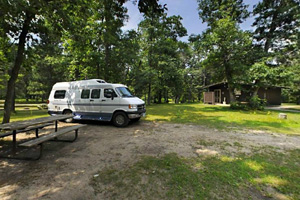 The campground offers 59 campsites, 12 of which are electric. A seasonal shower building is set among large oak and pine trees and is close to many of the campsites. 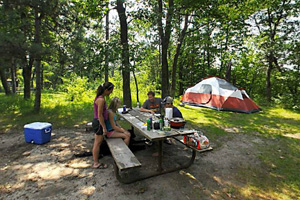 Enjoy camping with family or friends, or have a solo experience during the week when fewer campers are present. Several campsites are more private and some are close together so families can visit easily. Each campsite has a picnic table and fire ring. Campers can take a short walk from the campground to overlooks and trailside vistas, or to the boat landing for a view of the Mississippi River. 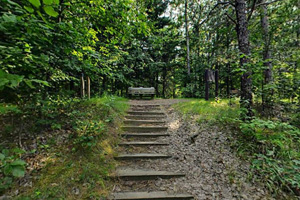 From this point, one can see over a mile upriver. Local lore has it that this may have been a vantage point for Ojibwe scouts as they watched for the arrival of Dakota warriors with captives from Big Sandy Lake. Further downstream, you can visit the site of the Battle of Crow Wing. 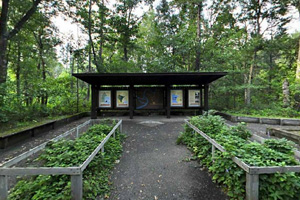 A large timbered kiosk provides an orientation with a map, text, and pictorial graphics of the park’s natural, scenic, and cultural features. Visitors may also explore a small garden of typical northern Minnesota woodland wildflowers. 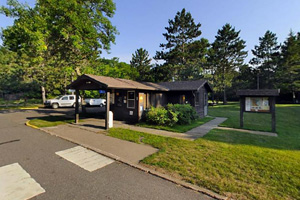 The park office is conveniently located along the main entrance road. Stop in with questions, to buy a permit, to register for a campsite, or to rent a canoe. Maps for hiking, directing you to the boat landing, or guiding you through the historic townsite can be obtained here. 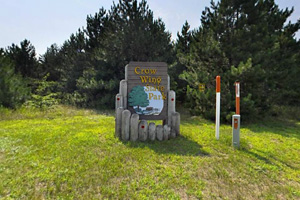 Crow Wing State Park has a rich history. Here at the confluence of the Mississippi and Crow Wing rivers, the oxcart trade between Winnipeg and Saint Paul grew for a quarter of a century. Later, when the railroads bypassed Old Crow Wing, the village became a part of our Minnesota history.