Welcome to the Hill Annex Mine State Park virtual tour! You'll see will see a landscape once altered by mining. Historical mine buildings, equipment and displays tell the story of life on the Mesabi Range. We hope the tour prompts you to visit the park in person sometime soon. 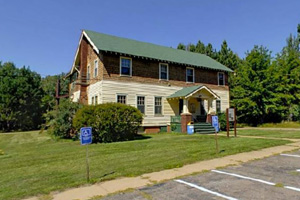 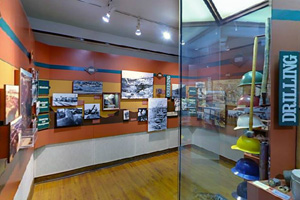 Interpretive displays inside the clubhouse share the unique geology and history of this mine on the Mesabi Range. The Hill Annex Mine produced 63 million tons of iron ore and was the sixth largest producer in the state. Mining began here in 1913 and continued until 1978. 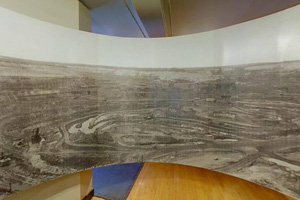 A large panoramic photo of the Hill Annex Mine in the late 1940s wraps around the exhibit space inside the clubhouse. Visitors may also explore other historic photos or venture upstairs into several rooms that depict aspects of the mining experience. 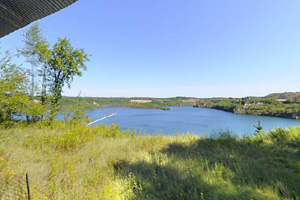 Water fills the old mine pit creating a lake. Visitors at the park experience a landscape altered by mining. 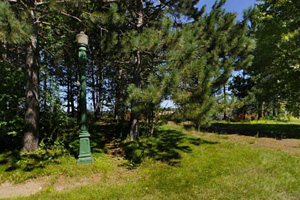 Visitors will find evidence of eighteen company owned houses that used to provide location housing for mine managers, engineers, and their families. Look for a street light, sidewalks, and a portion of a street that now serve as clues to this area’s past use. 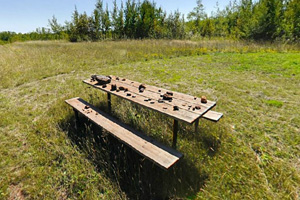 This is a portion of the Cretaceous pile where fossil hunting tours are conducted. This area was once a shallow sea during the earth’s Cretaceous period. Today, visitors may discover marine fossils in this area. Examples of these fossils are spread on a nearby picnic table. 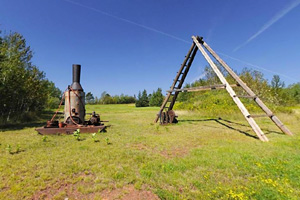 Mining equipment from days long gone have been placed where visitors can view them. This steam drill and large, wooden tripod were used for exploratory drilling in the early days of mining. They helped determine where iron deposits were located under the surface. 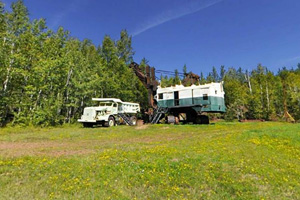 All of the historic mining equipment placed in this area had unique features, and many were adapted by the miners who used them. A nearby drill was once used to drill out a pattern of blasting holes which were then loaded with explosives. The blasting crew would get into the small, metal blasting shack (seen nearby) for protection as they set off the explosives. The electric shovels would then move in to load the blasted material onto dump trucks. 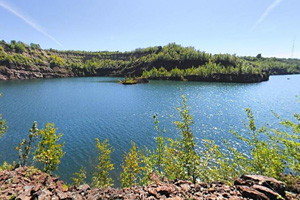 A viewing platform looks over an old mine pit now filled with water.  Hidden beneath the water’s surface is an old loading facility called the "A Pocket." Dump trucks would unload into the A Pocket where a conveyor would take material to the surface. 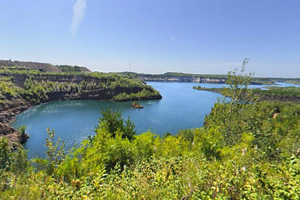 A view from the shoulder of a gravel road shows the Hill Annex mine and two adjoining mines. The mines are now filled with water and connected by the pit lake. When they were actively mining, water would be pumped out of the mines so that work could continue. When the mine shut down in 1978, the pumps that kept it dry over the decades were stopped and water seeped back in. Today, visitors may see osprey, gulls, and loons at the pit lake. 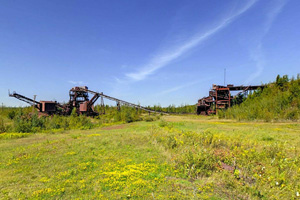 This ore processing area was put into use in the late 1940s, after the rich direct-ship iron ores had been depleted. Today, visitors can view historic mining equipment at this location. This includes the D Pocket, the Crusher, and the Heavy Media Plant. 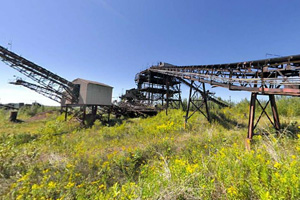 This scene reveals a close-up of the D Pocket, a loading facility that was used if the A Pocket or conveyor were not working. Dump trucks would have to slowly wind their way out of the mine pit to use D Pocket and keep production going. 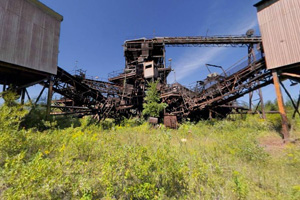 This scene reveals a close-up of the crusher. Coarse material would come out of one end of the crusher and fine material out the other end. Coarse and fines would then go by conveyors to be processed for shipment. 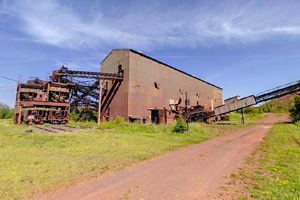 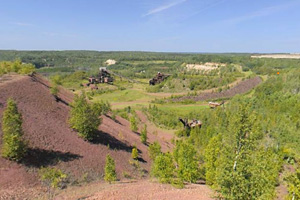 A view of the area can be seen from atop one of the huge piles of rejected rock created by the old mine. In the distance, the construction site of Essar Steel (a new-age mining facility) can be seen. 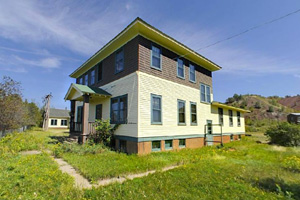 From this historic mine office building, the mine managers and engineers had an excellent view of the mining operation. 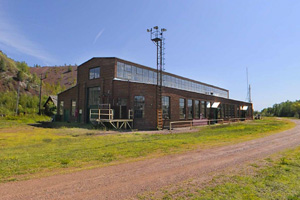 Just steps from the mine office building, visitors will see a historic brick train shop with large glass windows and a nearby historic wooden water tower. 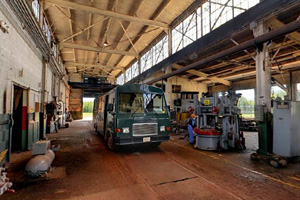 Inside the train shop

Within the train shop, visitors will notice a wood-block floor and railroad tracks running through the building. In the early years of mining, locomotives were driven into this building for repair. 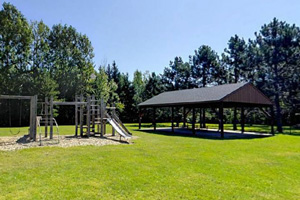 This city park adjoins Hill Annex Mine State Park. With a small playground and picnic tables, it is a nice spot for picnicking and relaxing. At one time this was the site of the Calumet School. 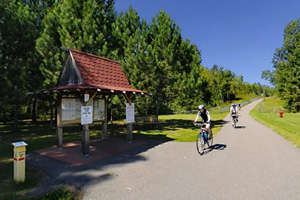 Hill Annex Mine State Park is a good entry point to the Mesabi bike trail. Visitors may also glimpse the historic Calumet Depot at this location. The depot was moved to this site from the railroad tracks.