Welcome to the Temperance River State Park virtual tour! On this journey you'll watch the river rush and plunge to Lake Superior, take in the dramatic and stunning force of the water from a trail overlook, and peek inside the gift shop where you can pick up treats or souvenirs. Enjoy your virtual tour, and come visit the park in person sometime soon!

Two park visitors watch the Lower Falls cascade through the bedrock under the lower bridge. Located just upriver of the river mouth, the Lower Falls is one of several waterfalls that were formed when the Temperance River cut its path down to Lake Superior. 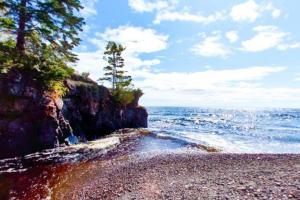 The Temperance River empties into Lake Superior at the southern edge of the park. The river was named slightly ironically, as it was said to flow so strong that there was no build-up of debris at the mouth, creating no "bar." 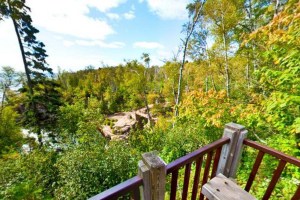 A small viewing platform overlooks the Lower Falls and the river mouth, with Lake Superior in the distance. From here, park visitors may catch a glimpse of some of the wildlife that inhabits the forests of Temperance River State Park. 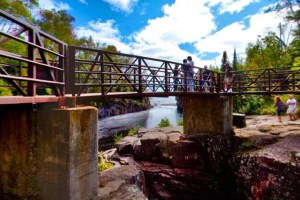 Visitors walk across the iron and stone bridge that spans the gorge over the Lower Falls. The Lower Bridge is a great place to get a birds-eye view of the fascinating rock formations and potholes formed by the Temperance River. 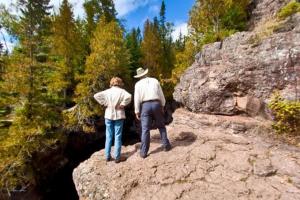 The Temperance River cuts through igneous bedrock to form this deep, narrow gorge. Formed about 1.1 billion years ago, this bedrock has been carved away by swirling water, creating large potholes and deep channels. 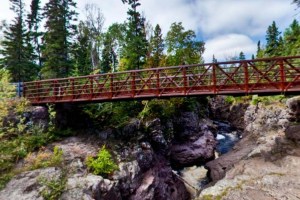 From the east side, the Upper Bridge is set high over the river as it rushes through the gorge. Campsites, hiking trails and picnic areas are located on both sides of the river. 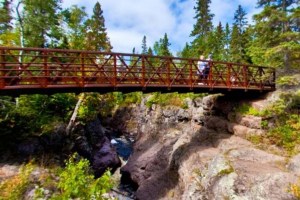 Seen from the west side, the Upper Bridge stretches over a wider part of the gorge. This trail is part of the paved Gitchi-Gami State Trail that runs through Temperance State Park. 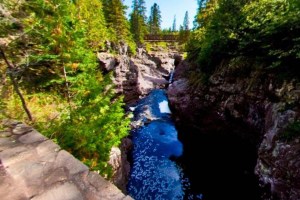 The river flows deep within the Upper Gorge at this overlook upriver from the Upper Bridge. The Superior Hiking Trail runs along the river on both sides, connecting Temperance River State Park to parks and communities along the Lake Superior shore. 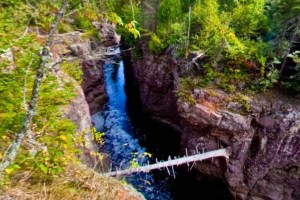 A fallen tree spans the river across the rocky outcrops along the Upper Gorge at this overlook. The Temperance River is a designated trout stream, with brook, brown and rainbow trout having been stocked in the waters over the years. Brook and brown trout have now been established as natural populations. 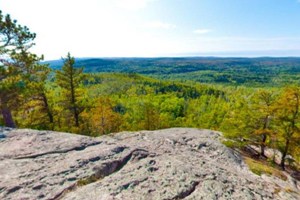 Carlton Peak looks out over the dense forests of Temperance River State Park. This peak is formed of a hard rock called anorthosite, several blocks of which were carried up from the depths of the earth by molten basalt lava. 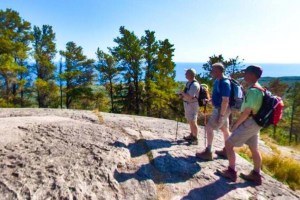 On the east side of Carlton Peak, hikers look out over Lake Superior in the distance. This high knob of anorthosite rock is located in the northeastern part of the park at an elevation of 1,526 feet. 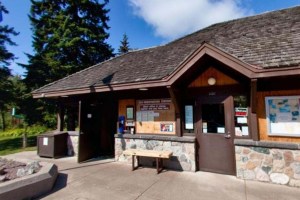 The gable-roofed park office is papered with informational signs and notices. Located near the Upper Campground and a short distance from the Temperance River and Lake Superior, visitors can find park and area information inside. 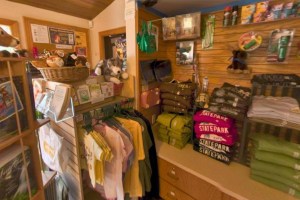 Apparel, postcards and memorabilia fill the shelves in the gift shop. This small store is located within the park office, where you can also buy firewood and ice during the summer season. 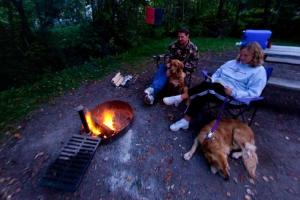 Campers sit in front of the fire in a wooded campsite located in the Lower Campground, their two dogs lying at their feet. The park has two campgrounds which encompass 52 sites, 18 with electrical hook-ups. 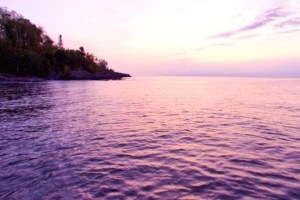 The sun lends the water a pinkish-purple hue as it rises over Lake Superior. Temperance River State Park is a perfect place to camp and picnic while enjoying the beauty and majesty of this Great Lake.