Symptoms of a twolined chestnut borer infestation are first seen in mid-July. The first branches to be attacked are usually at the top of the crown or fully exposed to sunlight. Leaves on infested branches die, turn orange, and remain on the branches for weeks or months. The persistence of dead leaves is one characteristic that distinguishes twolined chestnut borer attack from oak wilt infection. After a year of infestation, the top third of the crown will be dead and leafless, and the leaves on the middle third or bottom two-thirds will die and persist in the canopy for several weeks or months. In its second summer of infestation, the canopy often has three layers—dead, red, and green.

This factsheet details how to distinguish between twolined chestnut borer and oak wilt. 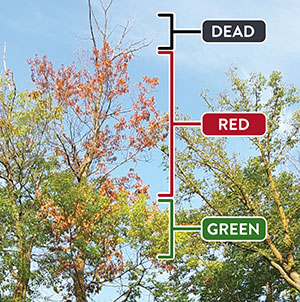 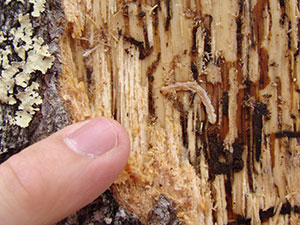