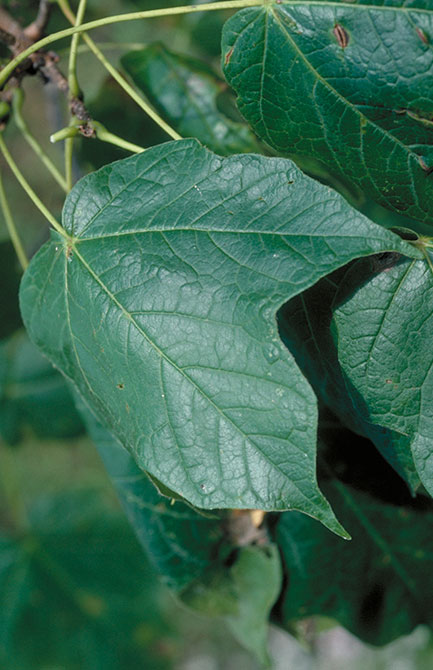 Click on the images help you identify an Black maple.

Resembles sugar maple so closely that some botanists consider it a variety of the latter rather than a separate species. However, because it shows quite distinct characteristics, it can be considered a separate species. Although commonly smaller than the sugar maple, it can reach heights of 80' to 100' with a diameter of 24" to 36"; when grown in the open, it has a tall, dense, compact crown, but in the forest a tall trunk supports a shallow, flat-topped crown.

On young trunks and on branches, the bark is thin, smooth, and pale gray; on old trunks it is deeply furrowed and dark. Twigs are usually stouter than those of sugar maple and have conspicuous warty lenticels.

Simple, opposite on stem, usually three lobed (a characteristic that further helps to distinguish this tree from sugar maple) with each lobe tapering to a slender point; smooth or wavy margins; drooping sides; dark green above, yellowish green below; yellow, orange, or deep red in autumn.

Samara occurring in double-winged, U-shaped pairs; the wings, about an inch long, are slightly more divergent than those of sugar maple; a smooth, bright red brown seed is enclosed at the base of each wing.

Similar to that of sugar maple and used for the same purposes, both woods being sold as hard maple; also used for the production of maple syrup and sugar; desirable as a shade or ornamental tree because of its dense foliage and fall coloring of bright yellow, orange, or scarlet.