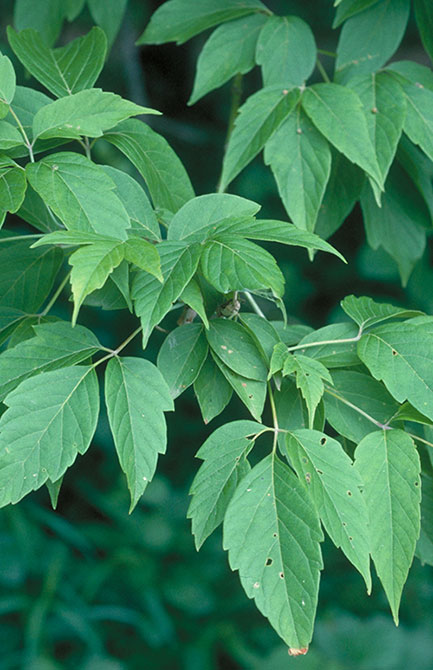 Click on the images help you identify an Box elder.

Height 30' to 50' on favorable soils with a diameter of up to 36"; rather bushy on unfavorable soils; limbs and branches fragile; tree somewhat subject to fungus disease and attack by insects.

Opposite on stem, length 5" to 8", pinnately compound with three leaflets (rarely five to seven) that are smooth, lustrous green with irregularly toothed margins (often three lobed); yellow in autumn.

Samara, 1" to 1-1/2" long; V-shaped pairs are winged and similar to that of sugar maple but smaller; ripens in late summer or early fall; often stays on trees all winter.

Common throughout the state; less abundant in northeastern part; grows naturally along streams and in cool ravines; a fairly rapidly growing tree, prolific in reproduction; however, many young trees are destroyed by grazing and cultivation; hardy tree for severe locations; shade tolerant.

Creamy white, soft, light, and close-grained; decays rapidly in contact with heat and moisture; used occasionally for fuel; has no general commercial value.