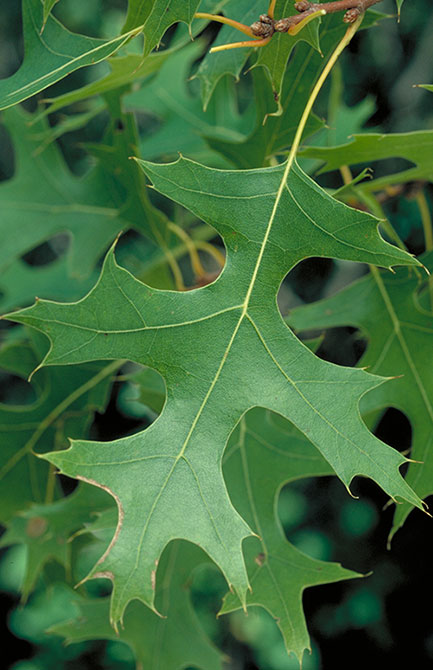 Click on the images help you identify an Northern pin oak.

Height 40' to 65' with a diameter of 24" or occasionally larger; trunk tapers rapidly; branches droop at ends forming a narrow, open crown.

Simple, alternate on stem, length 3" to 6"; somewhat oblong or oval; usually has seven lobes, each one bristle-pointed and separated by rounded openings cut nearly to the midrib, giving the leaf a very deeply cut or lacy appearance; bright red and hairy in early spring, turning green later, and a bright scarlet in autumn.

Bitter acorn that takes two years to mature; length 1/2" to 1"; reddish-brown, about half enclosed in its cup.

Usually grows on dry ridges in the southeastern part of the state and as far north as Cass Lake, except on limestone soils; not abundant in Minnesota; shade intolerant, moderately fast growing.