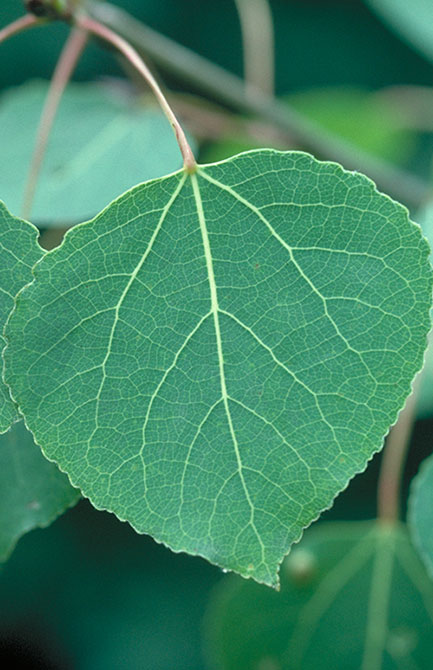 Click on the images help you identify an Quaking aspen.

Small to medium size; may reach height of 65' and diameter of 12" to 20", but usually somewhat smaller; open, rounded crown; young branchlets are reddish brown and shiny, becoming gray and roughened after first year.

Thin, white to gray green, almost smooth with black areas around base of limbs; becomes grayish and warty or deeply furrowed.

Simple, alternate on stem; small, broadly oval, short pointed at end and finely toothed along margin; green and shiny above, dull green below; usually ranges in size from 1" to 2" but often 4" or more in length as well as in width on vigorous young shoots. Leafstalks are flattened at right angles to leaves, causing leaves to quake or tremble in a very slight breeze.

Ripens in late spring (May or June) before full expansion of leaves; consists of cottony mass (catkin) containing tiny round light brown seeds that usually germinate in a few hours after they release from the tree.

Found in all parts of Minnesota; one of the first species to appear after cutting or fire; found commonly on cutover land; grows well on sandy, gravelly soils but thrives better on good soil; shade intolerant, fast growing.

Light brown, surrounded by heavy, nearly white sapwood; light, soft, not strong; used extensively in the production of pulpwood for book and magazine papers and for low-grade lumber.