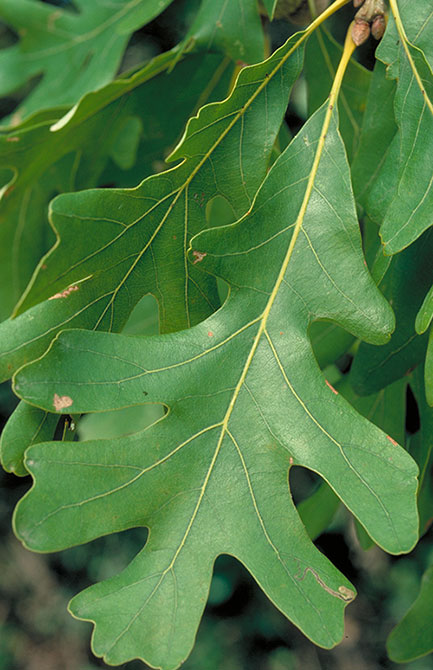 Click on the images help you identify an White oak.

Height 60' to 80' with a diameter of 24" to 36", although it can grow larger; tall and narrow-crowned in the forest; short in the open, crowned by a broad, rounded top with limbs spreading irregularly; well-grown specimens are strikingly beautiful.

Simple, alternate on stem, length 5" to 9" and about half as broad; crowded toward ends of twigs, deeply divided into five to nine fingerlike lobes; young leaf yellow or red while unfolding, later becoming light green above and much paler below; turns red or brown in autumn; sometimes remains on tree most of the winter.

A light brown acorn maturing the first year, length 3/4" to 1", about one-fourth of it is enclosed in a bowl-shaped cap. A valuable fall food source for many wildlife species.

Abundant in southeastern Minnesota as far north as the Twin Cities, often forming woodlands almost to the exclusion of other trees; less abundant northward to Mille Lacs and northwestward to the vicinity of St. Cloud; absent from the northern and western parts of the state; grows on heavy, well-drained acid soil; slow growing; difficult to transplant after passing seedling state. A fine permanent tree that should be planted wherever there is available space and the soil is suitable.

Light brown, hard, durable; one of our most useful woods for heavy construction; used for ships, railway ties, interior finish, furniture, and fuel.