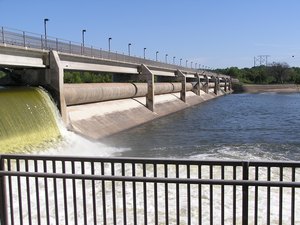 The Coon Rapids Dam is located on the Mississippi River between the City of Brooklyn Park in Hennepin County and the City of Coon Rapids in Anoka County. Northern States Power Company built the dam in 1913-14 for hydropower generation and operated it for this purpose until 1966. The dam and associated property was donated to the Three Rivers Park District (then known as the Hennepin County Park Reserve District) in 1969.

The dam was modified in the mid 1990's to provide a new walkway and new gate system. In 2005, a major scour hole on the downstream side of the dam was repaired. When new scour damage was confirmed by an underwater sonar scan in 2009, a decision was made to look at all issues of concern related to the dam: scour damage, longevity and operability of the rubber gates, and the need to prevent the passage of invasive fish species.

The Coon Rapids Dam Commission was formed by the 2010 Legislature to study options and make recommendations for the future of the dam. In early 2011 Stanley Consultants completed a preliminary design report on the ability of the dam to act as a fish barrier and suggested structural improvements for the prevention of fish migration. An appropriation of $16 million was included in the 2011 1st Special Session in July of 2011 to implement the recommendations. 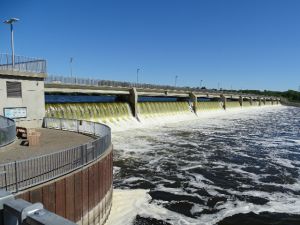 In March of 2012, Stanley Consultants was selected as the best of three proposals to perform the design work and construction engineering for the dam rehabilitation. Stanley Consultants completed the design work in 2012, including gate procurement, surveying, structural investigation, hydraulic modeling, geotechnical investigations, and submittals of the 30%, 65%, 95%, and 100% completed design documents. Construction of the two year project started in 2013, with the General Construction contract awarded to Kraemer and Sons. Installation of five new water control gates and construction of a new stilling basin on the Anoka County side of the dam were completed before the high spring river flows in 2014. Installation of four new gates and the rehabilitation of an existing gate on the Hennepin County side were completed in the spring of 2015. The pool level at the dam will be maintained at or near elevation 830.1 feet MSL (1929 datum).