More about the Mississippi River: Little Falls to St. Cloud 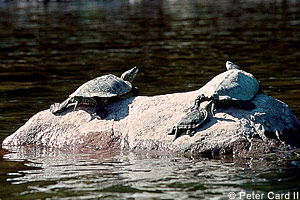 Water characteristics - check the river level report.
The Mississippi River drops six and a half feet for every river mile between Little Falls and Royalton. The flow of the river along this segment becomes more complicated than the upper stretches due to the presence of dams. Nearing these dams are rapids and therefore portaging should take place with plenty of distance before the dam. There are areas which allow for fun camping such as Seven Islands midway between Little Falls and St. Cloud.

Landscape - The falls are the result of an outcropping of a metamorphic bedrock formation. The formation can be seen at Pike Creek, in Charles A. Lindbergh State Park. The creek bed at the swing bridge on Lone Eagle trail is covered with boulders that are fragments of this bedrock formation and other types of rock imported by the glacier. 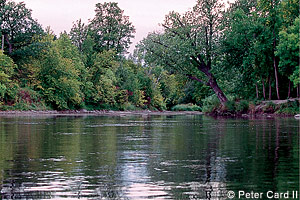 Shorelands are covered in mixed hardwood-conifer forest.Nearby, grassland prairie contains sparse vegetation, but is rich in wildflowers. Oaks and hazel are found in depressions on the prairie. The prairie becomes oak savanna forest in scattered groves, with aspen, chokecherries, and prairie willows.

Fish and wildlife - Watch for deer, muskrat, otter, fox, red tail hawks, eagles, kingfisher, and turtles along the shoreland. The open grasslands are important nesting areas for birds and grazing areas for large animals. Bison, elk, and antelope historically lived here. Further downstream, south of the buildings on the protected MacDougall Homestead, is a heron rookery which stands on top of the 60 foot bluff overlooking the river.

The relatively shallow riffles on much of the river harbor large quantities of food for smallmouth bass and walleye, and the fishing for these species is reputedly excellent.

The Minnesota Department of Health has guidelines for consuming fish taken from Minnesota's lakes and rivers. Go to the Fish Consumption Advisory Page to find out more. 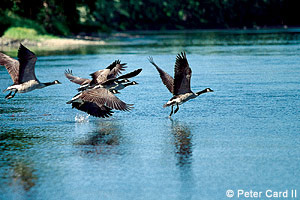 Cultural Information - Below Little Falls and the dam is Charles A. Lindbergh State Park. The park, established in the 1930s, was named not for the famous flier but for his father, who was a progressive Republican congressman from the area. The old Lindbergh family residence, the boyhood home of Charles Lindbergh Jr., is one of the park's main attractions.

From the Sartell dam to St. Cloud the Mississippi takes on a distinctly urban character; houses and factories line the banks. In the 1850s and 60s, St. Cloud's position near what was then the upper limit of Mississippi river traffic brought the town into prominence as an outfitting post for fur traders. Furs from territories to the west and north were loaded onto steamboats which brought supplies for wilderness forts and Canadian Posts of the Hudson Bay Company. The last regular upriver steamboat trip was made in 1874-by that time the railroad had replaced the riverboats. The control dam in St. Cloud was built later.