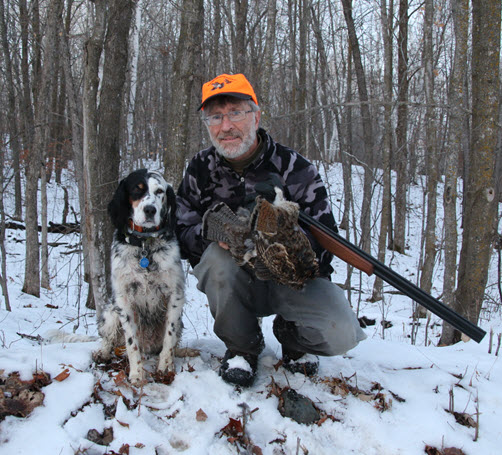 I would call myself a reactivated hunter in a sense. I grew up appreciating the outdoors and I always gravitated toward being outside. In high school, I would walk through the woods with my friends and occasionally flush out a grouse and do some general small game hunting. We didn’t hunt much with dogs – one friend had a cattle dog, a farm dog, that would occasionally find something for us.

Once I had my own family and we decided to get our own dogs, I gravitated toward bird hunting dogs because when I was young, I thought it would be fun to hunt more with dogs. We bred our English Setter dog, Tuli, and she had a litter of 10 pups. We told our daughter she could pick one to keep if she wanted, so she picked one and named her Olive.

When Olive was three years old, I went to visit some friends in Duluth and brought both dogs with. I thought, well, while we’re up here I should take the dogs grouse hunting. Tuli was limping and had a cut on her foot so I left her in the car (which she wasn’t very happy about), and took Olive grouse hunting for the first time by herself. She found eight or nine grouse and pointed about four of them herself. I said, “oh, I’ve got a good grouse hunting dog here.”

I decided that to be fair to Olive, I had to get her grouse hunting as much as I can. My goal is to get her out at least once a week in the fall and I’ve had a lot of fun hunting with her. Grouse are a difficult bird to hunt because they’re small and like to hang out in the thickest brush and woods you can find. A lot of times you’ll approach them from one side, and they’ll flee out the back area and you’ll barely get a glimpse of them. Olive will go around the other side where the grouse are and push them back my way. Realizing how good a grouse hunting dog she is has gotten me back into grouse hunting.

If you want to get outdoors, find somebody to go with – a mentor, a friend, or a family member. You can also do it on your own. There’s a lot of social media connections, different Facebook pages and websites you can search and find. We’re very fortunate to have a lot of quality places to go and enjoy nature in Minnesota. The DNR has a Recreation Compass page where you can pull up a map of Minnesota, search different areas, and find all the different lands you could go to.

I would also say to not give up. Once you start doing something, you get a better feel for it, you get more comfortable with it and it makes it easier to do more of it. There was a fellow who posted on a pheasant hunting Facebook page that it was his fourth year pheasant hunting, and he had just gotten his first bird. That was pretty great of him to stick to it. A lot of people, if they went out several times and didn’t get anything, they’d feel dejected and give up. Don’t give up, keep trying. If it’s something you really enjoy, stick with it and the success will come sooner or later.