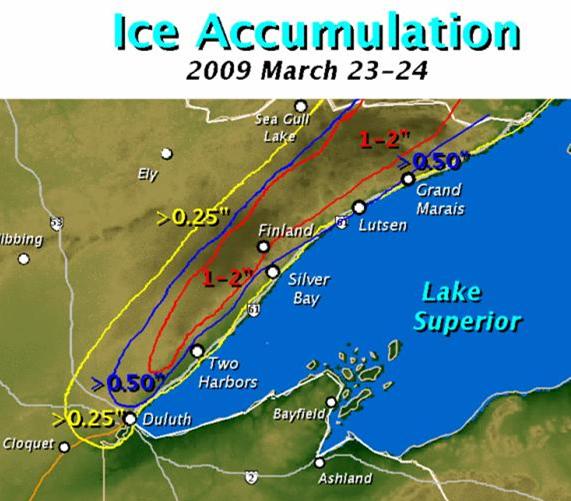 A vigorous area of low pressure moved from western Nebraska on March 22 to Sioux Falls South Dakota by the morning of March 23. An area of moderate rain mixed at times with snow marched across Minnesota out ahead of this low pressure. Cold, dry air was entrenched over the Arrowhead associated with a very strong area of high pressure that was over southern Hudson Bay on March 23rd. The area of moderate rain reached Northeast Minnesota after midnight on March 23rd. The surface air was warm enough in places like Ely and Hibbing to have only minor accumulations of ice. However, along the North Shore, the surface air temperatures remained below freezing during the day of March 23. Moderate rain continued through the day and tapered off by the early morning hours of March 24th. Two day precipitation totals include .91 inches at Grand Marias and 1.94 inches at Duluth. The .91 inches at Grand Marias was all freezing rain.

As the ice began to build up on March 23, power outages began as tree branches snapped and downed power lines. Some of the places hardest hit were Two Harbors, Finland, and Grand Marias. 2,000 people were without power in Lake County. Spectacular wintry scenes greeted residents in towns along Highway 61 north of Duluth. The crashing sounds of tree branches could be heard in the woods at Wolf Ridge Environmental Learning Center.

One unusual aspect of this storm was the amount of ice that accumulated near the shore of Lake Superior as photographs from Split Rock Lighthouse can attest. In past ice storm events in the Arrowhead, ice amounts were much less near the shore due to the warmer waters of the great lake. Despite the fact that the winds were from the east or "off the lake" the temperature of the lake was cold enough to not warm the air along the shore. Indeed, ice coverage was significant in western Lake Superior during on March 23.