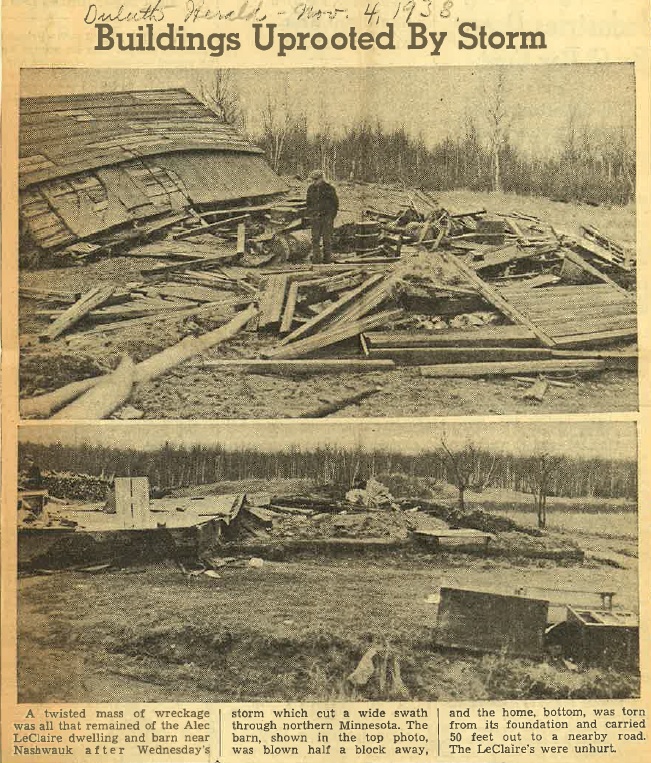 November 2, 1938 Tornado. (Note in the caption it says there were no injuries. There was one person injured.)
Courtesy: Duluth Herald

All but one of the November tornadoes have occurred after dark, with the ones in 2012 touching down from 11-11:30pm. Given the time of year with the extended darkness, there could be other tornadoes in the past that were missed because they were not seen.

There's been two strong November tornadoes in Minnesota. The latest Minnesota tornado on record is November 16, 1931 near Maple Plain in Hennepin County. There happened to be a Weather Bureau Volunteer Observer in Maple Plain at the time (Geo W. Richards) and he described the tornado: A tornado swept 3/4 mile south and east of this station at 9:35pm moving from sw to NE and NNE. ...a few hundred feet wide and four or five miles in length. (The tornado) Demolished and damaged several barns, machine sheds and windmills. One half mile of (Great Northern Railway) telegraph poles laid flat. Estimated loss by the observer was $10,000 to $15,000. Mr. Richards noted it was 66 degrees at 9pm before the tornado and wound up with 2.33 inches of rain, an impressive amount of rain for mid-November.

Another Minnesota November tornado touched down at 5:30pm November 2, 1938 near Nashwauk in Itasca County and moved northeast into St. Louis County. This tornado had a path length of 32 miles and was more destructive than the one at Maple Plain. This is the only Minnesota November tornado on record to cause an injury when it struck the LeClaire dwelling and barn near Nashwauk. The tornado tore the home from its foundation and carried it fifty feet to a nearby road. Mrs Axel LeClaire suffered cuts and shock, but the rest of the family escaped unhurt. Two horses owned by the LeClaire's were killed. The torando went on to lift the roofs off three other homes and destroyed a railroad trestle in a two block wide path of damage. A three inch plank from the York Mine in Itasca County was found a half mile away and a piece of timber that was ten inches in diameter and fifteen feet long was picked up and carried 300 feet, driving it into a farm road to a depth of six feet. The Weather Bureau noted that losses would have been greater for this tornado had it struck a more populated region.

On November 1, 2000 at 4:25pm a small tornado touched down 2 miles east southeast of Prinsberg in Kandiyohi County. No damage was reported.

A vigorous storm system brought warm, muggy air into Minnesota during the day on Saturday, November 10, 2012 setting record highs including 69 degrees at the Twin Cities International Airport. As darkness fell, a line of thunderstorms moved across the state with heavy rains, some hail and spawned four weak tornadoes. One tornado briefly touched down in Burnsville, another in Eagan, a third in Mendota Heights and finally one in Mahtomedi.