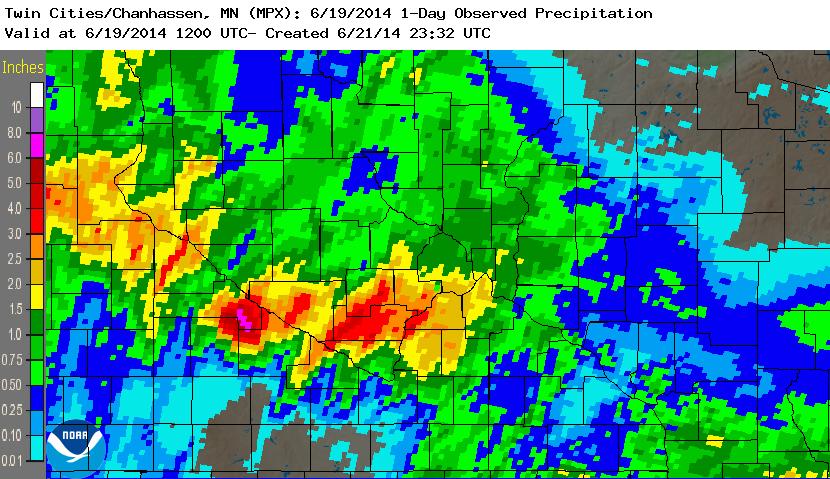 The rains just keep on coming.  After going through two consecutive nights were some pretty impressive rainfall totals resulted from training thunderstorms, Thursday, May 19th saw even more rain.  The surface low pressure system that sat over southeastern South Dakota and caused the heavy rains Tuesday and Wednesday created more issues as it slowly moved into extreme northeastern Nebraska and into Iowa.  As the South Dakota front worked into the western Minnesota area, another line of strong thunderstorms developed and even spawn a small tornado in Benson, MN. As the front propagated, heavy convection and already saturated conditions on the surface helped to develop even more precipitation in areas that were already under flash flood watches and warning.

Places like Eden Prairie saw at much as 5.47 inches of rainfall according to one CoCoRaHS station. Minneapolis/St. Paul officially tallied a total of 4.13 inches of rainfall, the highest one day total in five years.

The after affects of this event coupled with the two events prior led to widespread flooding throughout the Minneapolis and St. Paul areas.  The Minnesota River caused flooding in areas of Scott and Carver counties.  Many area roadways were washed out and closed down due to the potential driving hazards.