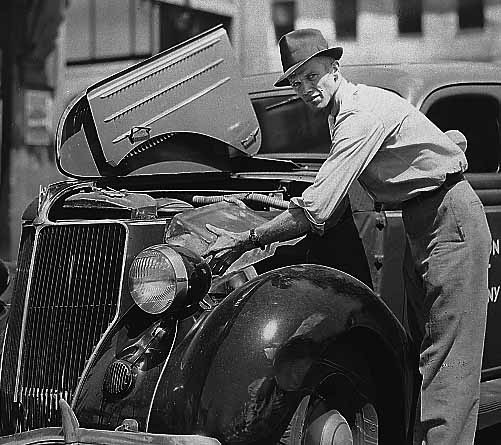 Cooling a Car in the 1930s
Courtesy: Minnesota Historical Society

Hitting 100 degrees is not a common occurrence for the Twin Cities metro area and happens in about one in five years. The most recent 100 degree readings occurred on July 4th and 6th of 2012. The hottest temperatures in the Twin Cities occurred in July 1936, during the Dust Bowl era. An all-time record of 108 degrees was observed on July 14, 1936. A high of 106 was recorded for each day from July 10th through the 12th in July 1936. In total an impressive 8 days in July 1936 were above 100 degrees, with another day in August also above 100, making for a record 9 days with temperatures at or above the century mark. July 1936 is also the hottest month ever recorded in the Twin Cities, with an average temperature at a very warm 81.4 degrees. In addition to the heat, only 0.11 inches of precipitation fell, making this the driest July as well. The Dust Bowl Era produced many record hot temperatures in the Twin Cities, including the only 100 degree day observed in May.

Combinations of high temperatures and high dew points lead to very high "heat index" values. Like the wind chill factor, the heat index attempts to describe "what it really feels like." Just as the wind can make winter air feel colder, too much moisture in the summer air can make the it feel hotter. The highest heat index for the Twin Cities is 119 degrees, occurring on July 19, 2011. Just before 4pm the air temperature was 95 degrees, with a dew point topping out at an unbearable 82 degrees. More recently, a heat index of 112 degrees was recorded in the Twin Cities on the Fourth of July in 2012, as an air temperature of 101 degrees combined with a dew point temperature of 72 degrees.

Just about any type of weather can occur in Minnesota and the Twin Cities. Although heat waves are uncomfortable and even dangerous, they are not unusual here.