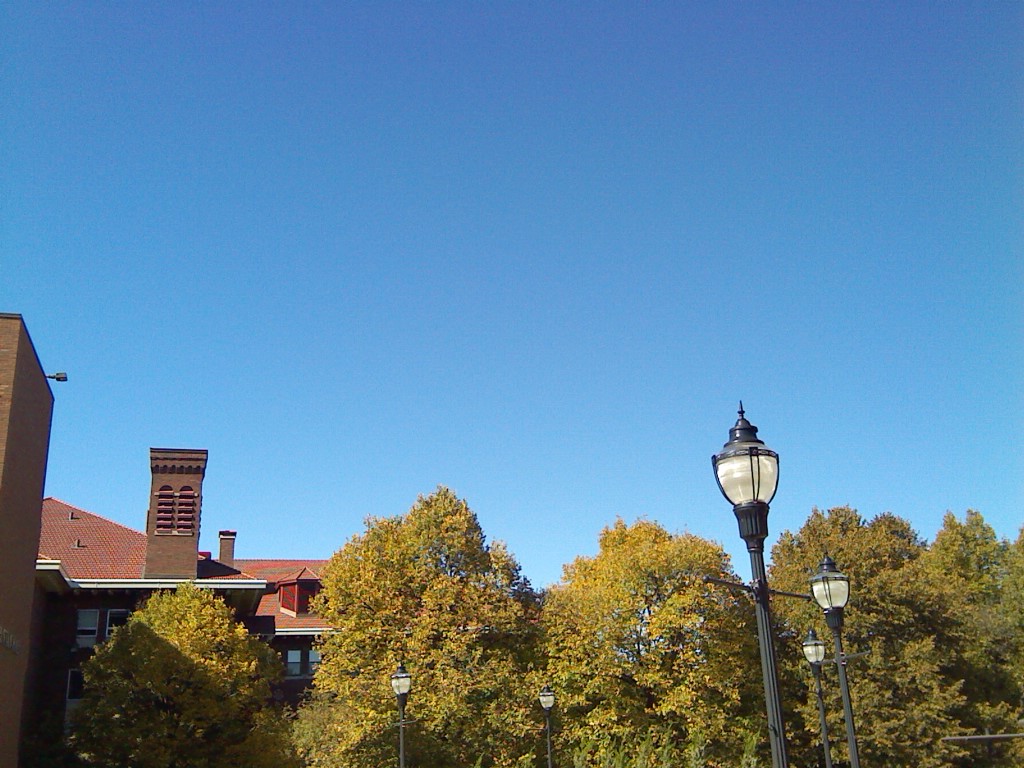 Fall is a season of enormous change in Minnesota, as we shift from the long days and warmth of summer, to the short days, long nights, and eventual cold of winter. Therefore, the season brings us a full spectrum of weather conditions, often convincingly summer-like at the beginning, and unmistakably winter-like at the end.

Our climate is too varied to deliver us the exact same weather at the same time every year, but careful observers may have noticed that one type of fall weather occurs with striking  regularity and reliability.

Indeed, the tendency to have clear skies and tranquil weather during the end of September and early October is a remarkable and lesser-known oddity of our regional climate. Yes, fair, cloudless, and traditionally pleasant weather is more common during this period than any other time of year in the Upper Midwest!*

The late Dr. Don Baker and his colleagues first discovered this micro-season of agreeable, even blissful weather during the early 1980s. They observed that from the Canadian border down into Missouri, clear days (those with no cloud cover between sunrise and sunset) were by far most common from the middle-late part of September through much of October, with a sharp spike centered on the period between September 27th and October 3rd. 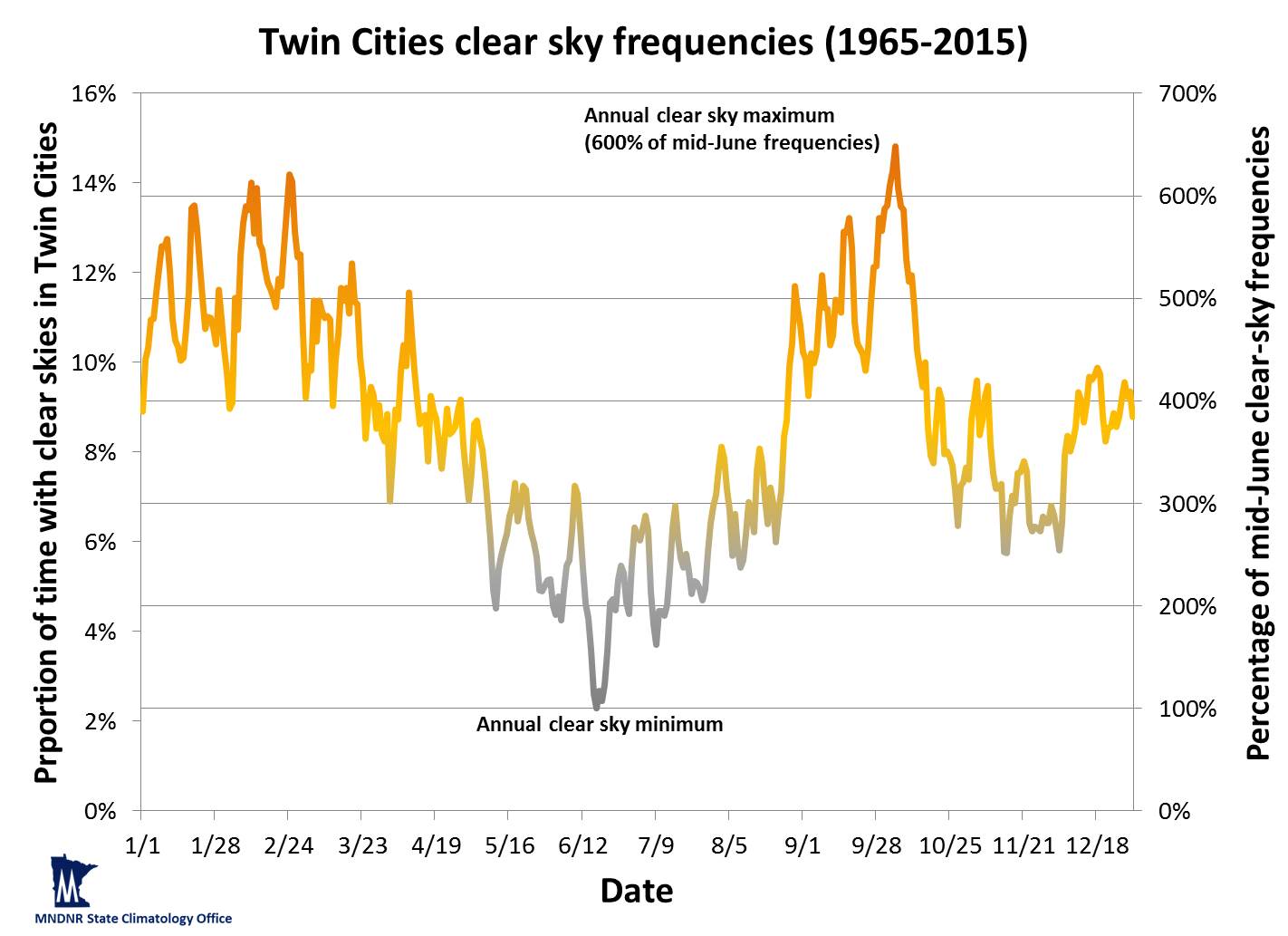 Graph of clear sky frequencies in the Twin Cities. The left axis refers to the average frequencies of clear skies (no clouds), derived by combining daily cloud cover data through July 1996 with hourly data available thereafter. The right axis indicates the frequencies relative to the annual clear-sky minimum during mid-June.

This finding has been remarkably stable. Even when we update that earlier work using both manual and automated data, we find the same thing. By combining the daily cloud cover data available between 1965 and 1996 with the hourly data available from 1996 through 2015, we still see that the end of September into early October has more clear skies than any other time of year, and 600% of what we find in mid-June!

(June, by the way, is not the cloudiest time of year—that distinction goes to December. June is, however, least likely to be completely free of clouds all day.) 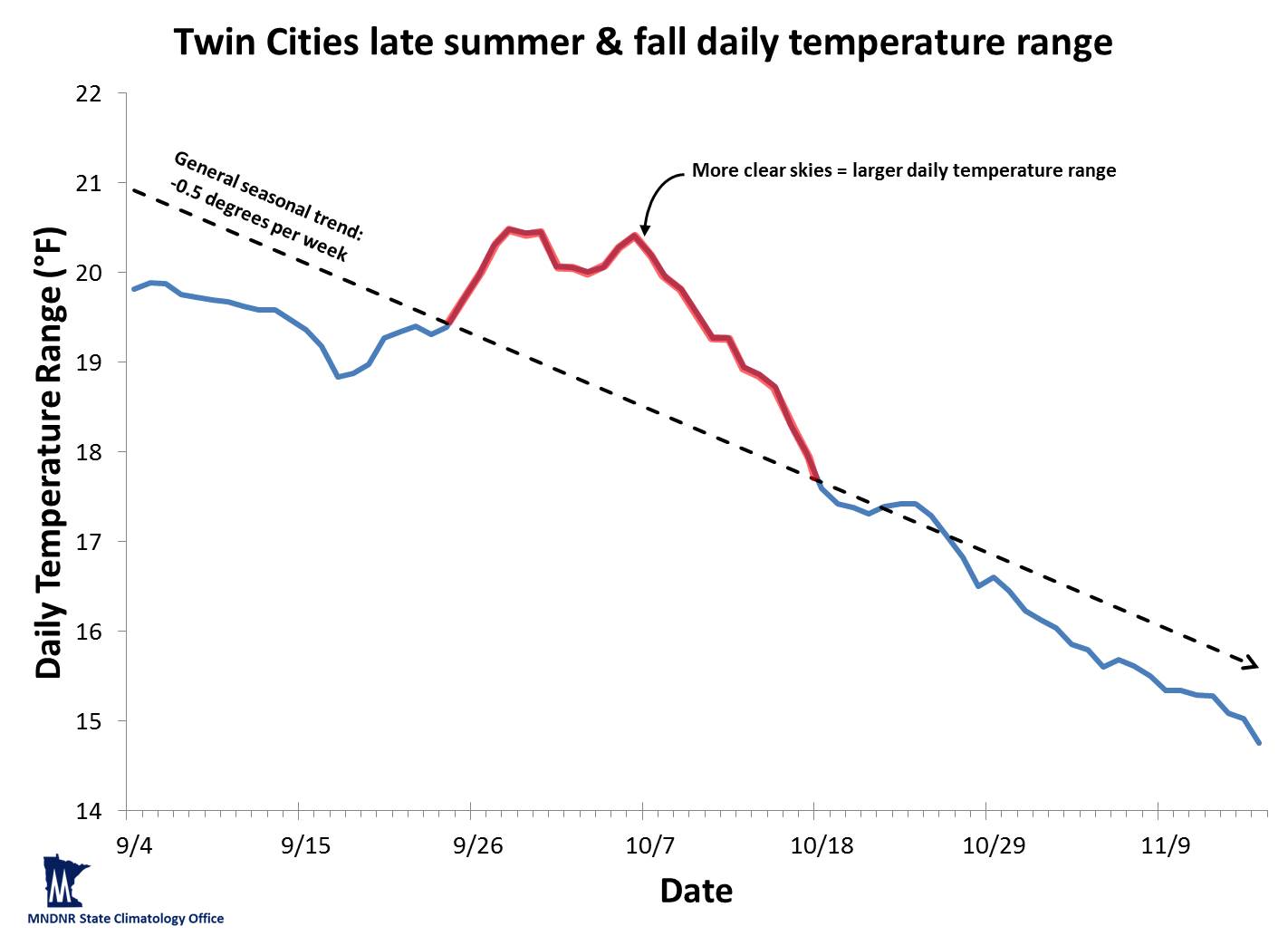 Graph showing the average daily temperature range (the difference between the daily high and low) in the Twin Cities, based on 30 years of data from October of 1986 through September 2016.

First, the amount of moisture plants release to the atmosphere winds down rapidly in late September with fading sunlight and falling temperatures. This loss of moisture reduces the relative humidity, which both prevents cloud formation and allows for greater temperature ranges. Interestingly, the Upper Midwestern “rainy season” tends to end around that time also.

Additionally, this period coincides with a general increase in sea-level pressure across the region. Rising pressure means sinking air, and sinking air means few or no clouds, because clouds are formed and maintained by rising air
motions.

Unfortunately, the duration of this lovely weather is usually kept at bay by the transition to a winter-like circulation pattern, which typically begins in mid or late October, and is marked by lower pressure, higher humidity, and hence, more clouds. These conditions only intensify through the remainder of fall and early winter, leaving December as the cloudiest month on the calendar.

When we get out of the early winter gloom in January, the mid-winter storm track is well south of Minnesota, leaving us in cold high pressure with plenty of—you guessed it—clear skies. But these clear skies almost always spell very cold conditions, often the coldest of the year.

So, Minnesota can have exceptional weather virtually any time of year, but thanks to a well-timed convergence of factors, those conditions are most likely during a short, sweet window in early fall.

(Read the classic scientific paper by Don Baker and colleagues.)

* It's probably worth pointing out that while clear skies and fair weather may be more likely in early fall than any other time of year, clouds, rain, and cool conditions still can and do occur!