Late Frost for the Twin Cities 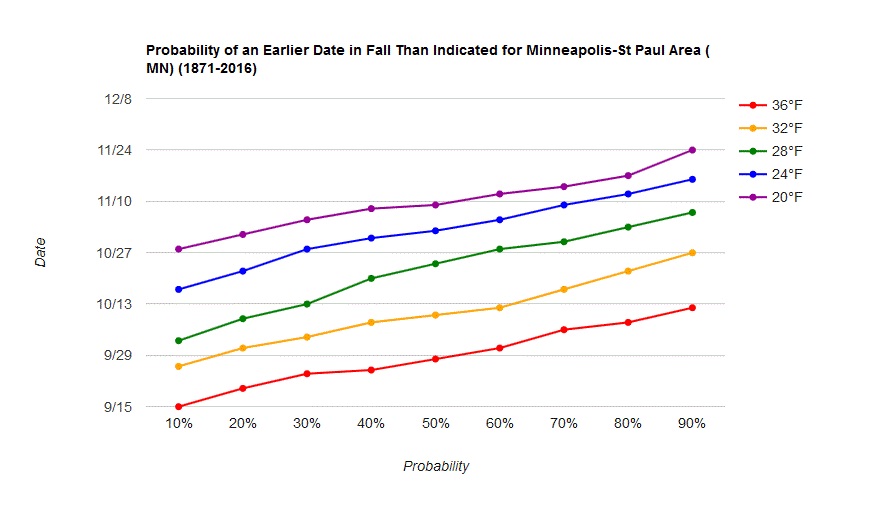 In 2016 the Twin Cities observed its longest frost-free season on record, tallying 219 consecutive days without a 32 degree F reading at the MSP airport. The first such reading of the 2016 fall was also by far the latest on record, and did not come until November 18th--11 days later than the old record of November 7, set in 1900. The Twin Cities "threaded" record for these purposes extends back to 1873.

Historically, roughly 90% of autumn seasons produce a 32 degree F reading in the Twin Cities by October 28, and the first freezing reading has occurred in November just eight times (including 2016). Although the autumn season has warmed rapidly in the last several decades, all of the other November first-freeze dates were in the 20th and 19th centuries, with the most recent one on November 6, 1958.

Comparing the first 32 degree temperature statistics over time in the Twin Cities can pose some challenges, because the physical location of the equipment has undergone some important changes. For a good part of the Twin Cities' observing history (from 1891-1959), the official thermometer was on top of a building, first in downtown Minneapolis at a height of 105 feet above the ground, then at old Wold Chamberlain airport, at a height of 32 feet above the ground. Cold air tends to pool close to the ground, especially on the clear and calm nights that frequently accompany early freezes. The building-top thermometers therefore likely missed some freezing temperatures that could have been found nearer the ground. Indeed, all seven of the previous November first-freeze dates occurred during building-top era, suggesting that the equipment location may have been responsible for warmer readings and therefore later freeze dates.

In 1960, thermometers were moved to a location approximately five feet above the ground at the MSP airport, and the latest freeze since that move was October 30, in 1973. The average first freeze date at the MSP location is October 7th, versus October 13th during the building-top era.

Two issues further complicate interpretation of the freeze records in the Twin Cities. First, the urban heat island has expanded outward from downtown areas, as more of the surrounding landscape has turned from fields to blacktop. Additionally, the entire region is in the midst of pronounced multi-decade climatic change that has resulted in, among other things, rapid warming during fall. As a result of both of these changes, elevated low temperatures, delayed first-freezes, and record-late freezes are all more likely than they had been in previous decades.