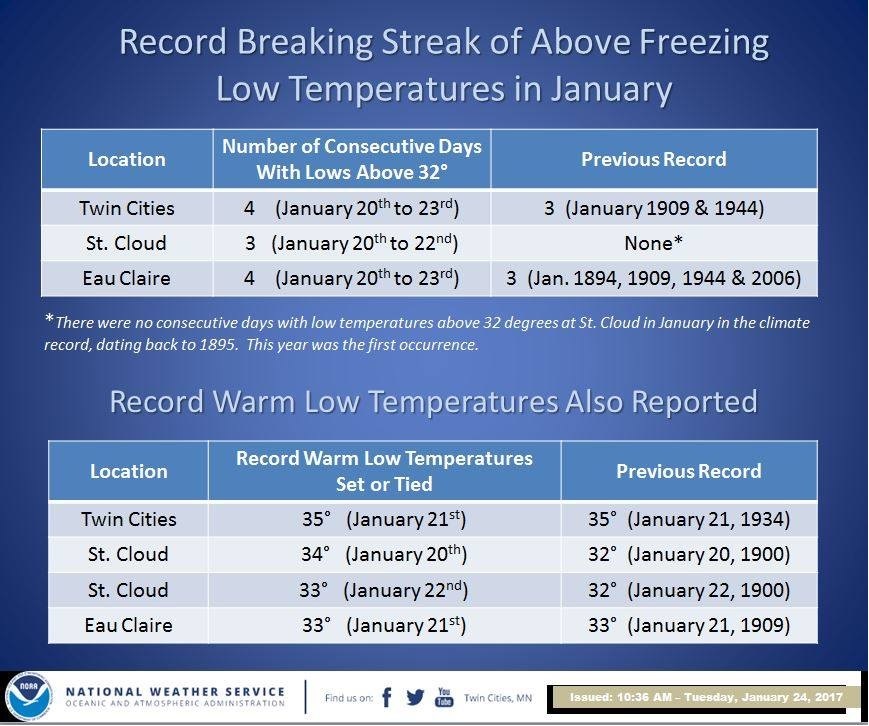 The January Thaw of 2017 was one of the more prolonged January thaws on record, going back to 1873.

A "January Thaw" is defined as two or more consecutive days with maximum temperatures above 32 degrees F. These thaw episodes are a regular part of Minnesota's climate, bringing a brief respite to a Minnesota winter. January Thaws are most common in southwestern Minnesota, where the local topography can boost daytime temperatures above freezing with relative ease. Even in the Twin Cities, January Thaws happen in most years-- about 93% of the time. For comparison, a "White Christmas" in the Twin Cities (one inch or more of snow cover on Christmas Day) occurs about 72% of the time, meaning we are more likely to have a January Thaw than a White Christmas.

In the Twin Cities, the January Thaw of 2017 lasted eight days, from the 17th through the 24th.  Four consecutive nights stayed above freezing (32 degrees F) as well, setting the record for the longest such stretch during January. St. Cloud also had three nights that stayed above 32 degrees, also setting a record there.

This was not the longest January Thaw on record--it wasn't even close. That distinction belongs to January 13th through 30th of 1944, when the Twin Cities recorded 18 straight daily high temperatures above 32 F, including a reading of 58 degrees on the 25th that still stands as the warmest January day on record in Minneapolis.

The last time there was not a January Thaw in the Twin Cities was in 2011. In 2009 there was one maximum temperature of 46 degrees, but that occurred on the 31st and fell short of the two-consecutive day criteria.