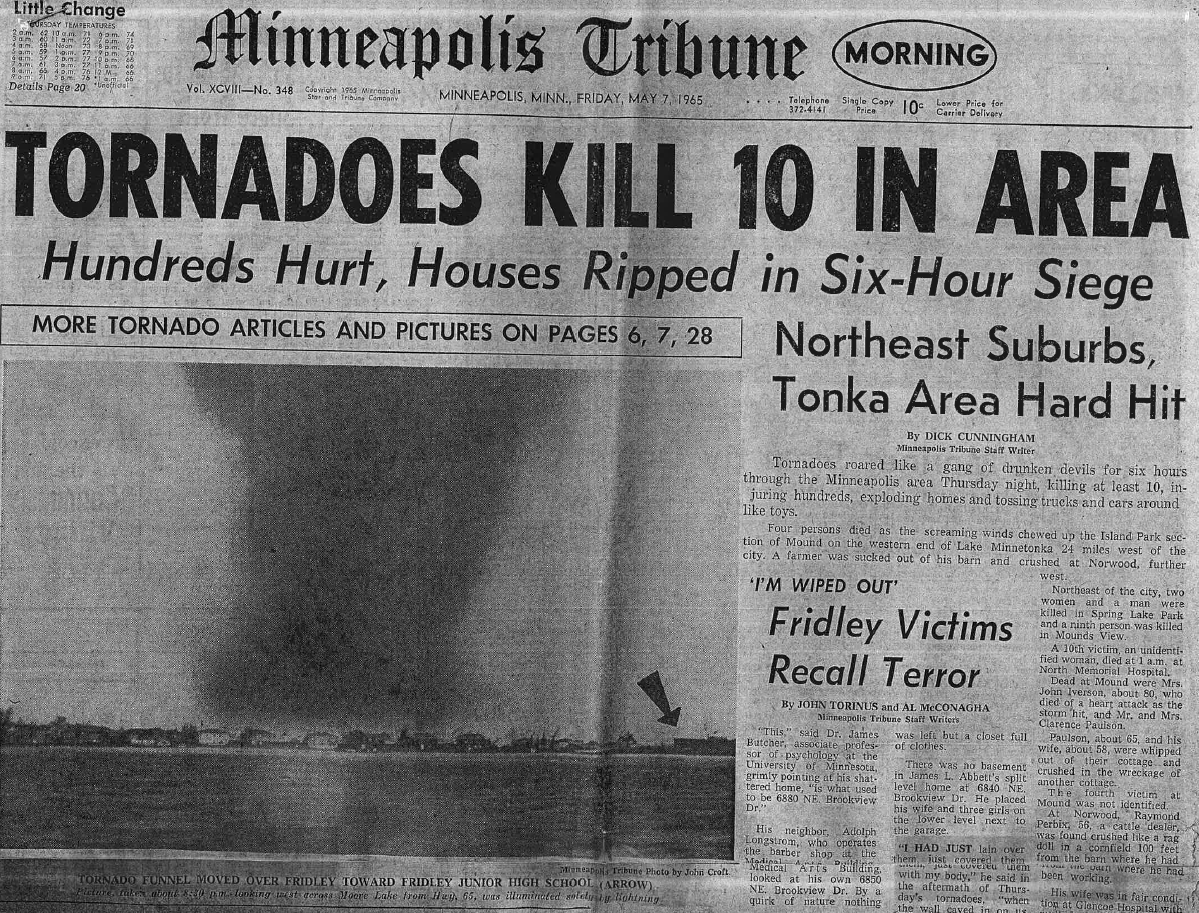 Headline of Minneapolis Tribune day after May 6, 1965 Tornadoes. The tornado photo was taken at 8:30pm and was illuminated by lightning.
Courtesy: Star Tribune

On Thursday, May 6, 1965 the worst tornado outbreak in Twin Cities history struck the western and northern metro area, where five tornadoes occurred, with another just to the west in Sibley and McLeod Counties. The barrage of tornadoes lasted nearly three hours, from the early evening until well after dark, but the severe thunderstorms that spawned them lasted many hours longer. Four of the evening's tornadoes were rated F4 on the Fujita Scale, one was an F3 and another was an F2 (see the new "enhanced Fujita" scale here). Minnesota has not seen a day since then with that many F4 or EF-4 tornadoes.

Debates have continued since 1965 about the actual tornado tracks, their timelines, and about their true human toll, but the official record indicates that the tornadoes killed thirteen people and injured 683 more, with 600 homes destroyed and 1,700 people rendered homeless. Six fatalities occurred in Mounds View with the final tornado of the evening. Another tornado claimed three lives in the Island Park area of Mound, on the north and northwest side of Lake Minnetonka. Other deaths were reported in Fridley, Spring Lake Park, and in Sibley County, between Green Isle and Hamburg.

The tornadoes developed from "supercell" thunderstorms that formed and re-formed for several hours along a stalled boundary connecting a strong low pressure area in southern Canada, with a weaker one in Nebraska. Strong winds aloft provided the vertical wind shear that enabled many of these storms to rotate.

Although the storms are best known for their devastating tornadoes, the evening actually had nearly six hours of severe thunderstorm activity, which records indicate led to one of the most widespread, damaging, and longest-lasting hail events in Minnesota history. Golfball to baseball-sized hail was reported periodically from 6 PM until almost midnight, affecting all but the southeastern suburbs.

The serial regeneration of severe thunderstorms meant that not just hail, but also tornadoes, affected some locations more than once that evening. The official record shows that two separate tornadoes struck the section of Fridley between the Mississippi River and Central Avenue, and from just south of 694 to Osborne Road. However, many residents who lived through the evening insist--and there is decent evidence to support it--that tornadoes struck parts of Fridley three times. Although the official record indicates that the two tornadoes in and around Lake Minnetonka did not cross paths, examination of damage swaths shows that both tornadoes did affect the same portion of Wayzata--45 minutes to one hour apart.

Despite the large human toll, many lives were undoubtedly saved by excellent forecasting and communications. The US Weather Bureau (now the National Weather Service) personnel had anticipated the storms and were able to corroborate the tornadic cells on radar with reports coming in from the public and the media. This enabled them to issue timely warnings and to activate the Civil Defense Bell and Light Air Raid Warning sirens across the Twin Cities for the first time, ushering in the use of outdoor sirens for tornado warnings. As people sought safety in their basements, they tuned into radio, particularly WCCO-AM's announcers Dick Chapman and Charlie Boone. To this day, many survivors credit the station's broadcasts with providing life-saving information about the storms and the areas affected by them. Radiotapes.com has audio from WCCO-AM coverage. Law enforcement personnel, watchful citizens, and aviators at Flying Cloud and Anoka County airports also provided critical information that prevented the tragedy from being worse than it was.

Additional information on the 1965 tornadoes: