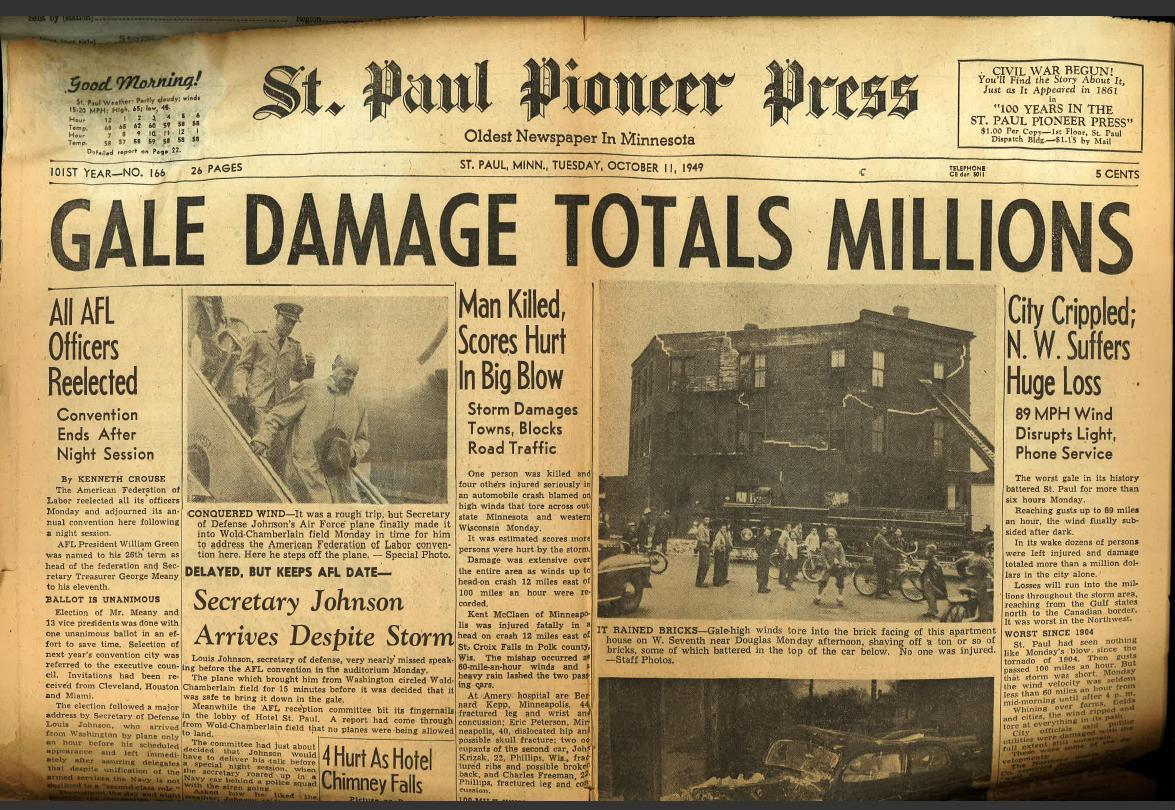 On October 10, 1949, an unusually powerful low pressure system brought hurricane-force winds to much of Minnesota, leaving at least four Minnesotans dead and over 100 injured, along with widespread damage to buildings, trees, and power lines.

Winds were clocked at 100 mph at Rochester, with a gust of 89 mph at the Twin Cities International Airport, where the wind was sustained at 50 mph or greater for two hours straight. Numerous store windows were broken and large chimneys toppled. The top 10 floors of the Foshay building were evacuated with the tenants feeling seasick from the swaying building. Giant waves piled up boats on the shores of Lake Minnetonka. Shingles from the roofs of the airplane hangers at Wold Chamberlain Field (the predecessor to the International Airport) were peeled off. The surface observations at Wold Chamberlain show the character of the day.

Extreme non-thunderstorm winds of this sort have affected the region several times since 1949. They are almost always associated with intense low pressure systems. The very long duration of the damaging winds (in some cases lasting over 12 hours), and their large areal coverage (often occupying tens of thousands of square miles simultaneously) have led to damage and casualty statistics that rival those of tornadoes and severe thunderstorms.

STORM TEARS CITY: BUILDINGS WRECKED, TREES TOPPLED. It was with this banner headline that the St. Paul Dispatch began its account of the "inland hurricane" which raked the Twin Cities and much of southern Minnesota on 10 October 1949. The storm generated wind gusts of 82 and 89 miles per hour, respectively, at the St. Paul and Twin Cities International airport stations, caused several injuries and left behind many uprooted trees, broken branches, downed utility lines, toppled chimneys, damaged roofs and broken windows. Damage in the Twin City area was said to have exceeded $1 million, at least one half of which occurred in St. Paul (where, according to news reports, damage was "greater" than in Minneapolis).

The high winds -- which were spawned by a deep low pressure system which had formed several days earlier in New Mexico -- also caused numerous deaths and injuries. According to the 10 October Dispatch, 27 deaths had been reported in the upper midwest states affected by the storm and, in the Twin Cities, a number of persons were injured by shards of glass from breaking windows, bricks from falling chimneys and/or from other wind driven debris. In St. Paul, a woman working on the third floor of the Great Northern building at Fourth and Jackson Streets was injured when many of the windows on the windward side of the building blew out, scattering shards of glass into adjacent work areas. In Minneapolis, several persons were said to have been buried when a chimney collapsed on the third floor level of the Sheridan hotel. Other reports indicated that, although many windows in Humboldt high school were blown out while classes were in session, the students inside escaped without injury. Newspapers also reported that Minneapolis's Foshay Tower "swayed so much" in the wind that several employees working inside became ill and were forced to leave the building.

And, taking note of an interesting -- but presumably coincidental -- anecdote, St. Paul newspapers reported that M. R. Hovde, the U.S. Weather Bureau's upper midwest section director was on vacation from his Minneapolis office on 10 October and, as a result, "officially missed the big blow."